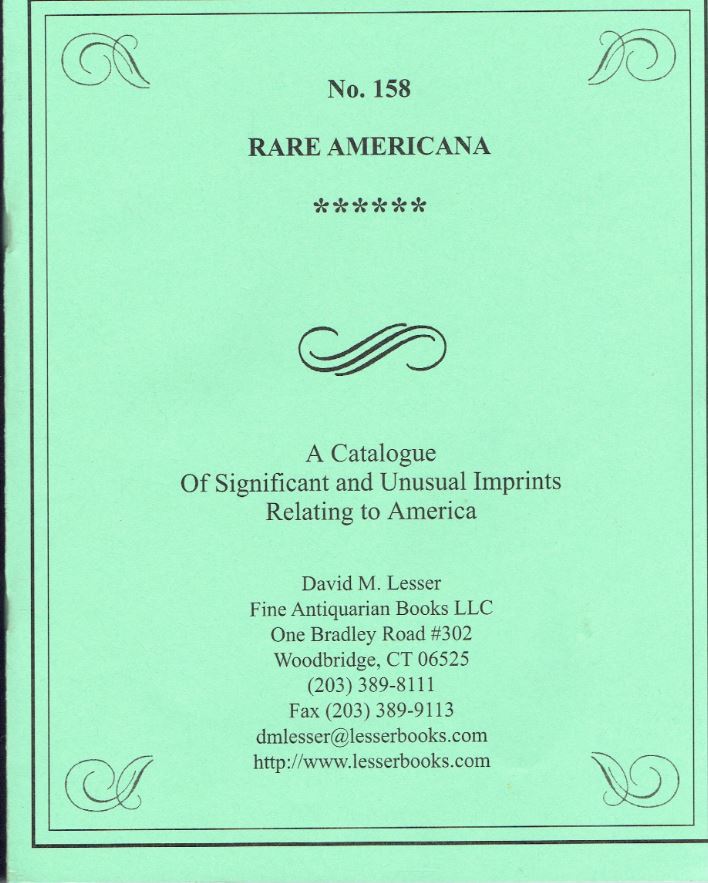 David M. Lesser Fine Antiquarian Books has released their Catalogue No. 158 Rare Americana. It follows their usual format – shorter form items (pamphlets, broadsides, prints, etc.) from or relating to America, overwhelmingly from late colonial times to Reconstruction. There is much in the way of political material, some ecclesiastical, some personal, and whatever else was on Americans' minds at the time. These catalogues are always filled with interesting works, even though many are cringe worthy now. Here are a few from this latest edition.

We begin with the origins of Dixie, not the land, but the song. The song was first published in 1860, an eventful year both north and south. The writer was Daniel Decatur Emmet, though on this first edition he is named simply Dan D. Emmet. The title isn't Dixie either. It is I Wish I Was in Dixie's Land. The title of the sheet music continues, Written & Composed for Bryant's Minstrels by Dan D. Emmet. Bryant's Minstrels was a blackface group, those being popular in the South, and in the North as well in those days. However, despite the timing, it was not produced for the Rebellion, but for the show. Nevertheless, it quickly gained popularity on both sides of the Mason-Dixon line. For the South, it became sort of the Confederate anthem, sung regularly by their troops. Even Abe Lincoln liked the song very much. Here is one more thing I never knew about Dixie. The South was not known as "Dixie" by many people then. It was the song that gave it its familiar name, not the other way around. One more thing – Emmet was from Ohio and wrote the song while in New York City. Item 64. Priced at $950.

Back in the 19th century, before Twitter, it was much more difficult to carry on your personal battles in public. Francis Edmonds had to go to a printer to make his self-defense known. So here is his rebuttal to charges that he used his position as a bank teller to make some unauthorized withdrawals: Defence of Francis W. Edmonds, Late Cashier of the Mechanics' Bank, Against the Charges Preferred Against Him by Its President and Assistant Cashier. Edmonds claims that he was "driven" from the bank by the aforementioned two individuals "with imputations upon my integrity." Undoubtedly there were, but from hindsight, and this all happened in 1855, it is hard to tell who was right. The charges were that Edmonds "caused large defalcations," and used "bank funds for his own personal advantage." These false charges, Edmonds explains, were "mere vague rumors," based on "bad feeling, mental delusion or self-interest." And perhaps some missing cash? Item 58. $225.

When you think of Currier & Ives, you probably think of quaint prints of America, sort of the 19th century Norman Rockwell. I never would have imagined anything ugly from them, but here is one of a series of awful, racist prints. They put out a run of prints in the 1880s, the Darktown series. These prints displayed black Americans in demeaning poses, ridiculing their intelligence. The Currier & Ives website describes them as more "in a light hearted vein, and not in an overly malicious one." It is true you need to judge people by their times, but the constant ridicule, and this is extreme, is hard to understand. Item 44 is The Darktown Fire Brigade – Hook and Ladder Gymnastics. It displays a group of black firemen who clearly have no idea how to put out a fire. A couple of them aim their hoses up in the air. Two firemen desperately try to hold onto a swaying ladder, a woman on top holding on for dear life. A third man stands by to catch her. Another holds a harpoon, ready to spear her if necessary. Two other firemen are busy blowing trumpets, while the house fire rages on. A woman upstairs desperately calls for help. Item 44. $450.

Item 11 is a land promotion, for Tierra Perfecta, or "Perfect Land" of the Mission Fathers. Lower California, the Peninsula, Now Open to Colonists. It was published by the International Land Company of Mexico in 1887. They were selling "fertile land" in the "northern or upper peninsula of Lower California." That would be Baja. Illustrations depict orange groves, bananas, and olive trees. I find it surprising that Mexico allowed such a promotion. They were seeking American settlers? Didn't they learn anything from Texas? $500.

Item 15 is a printed Letter from General C. F. Henningsen, in Reply to the Letter of Victor Hugo on the Harper's Ferry Invasion, with an Extract from the Letter of the Rev. Nathan Lord, D. D., President of Dartmouth College... from 1860. Hugo had a letter published in London in which he praised John Brown's unsuccessful attempt to liberate weaponry from Harper's Ferry to support a slave revolt. Hugo called Brown a "liberator" and "champion of Christ," who was performing a "sacred duty." These words did not sit well with Henningsen, who would soon be commanding Confederate troops. In words later repeated in images by Currier & Ives, he writes, "the negro race has a different, and, in some respects, inferior mental organization, certainly, to the Caucasian race, and probably to every other, and that he is wanting in natural capacity for freedom." Despite efforts to civilize him, he is "what they found him – a barbarian, a savage, or a slave." As for Dartmouth President Lord, a true northern man with southern principles, he predicts, "slaves will yet be called for in New England, and by New England men." $500.