Some Gifts from Shapero Rare Books 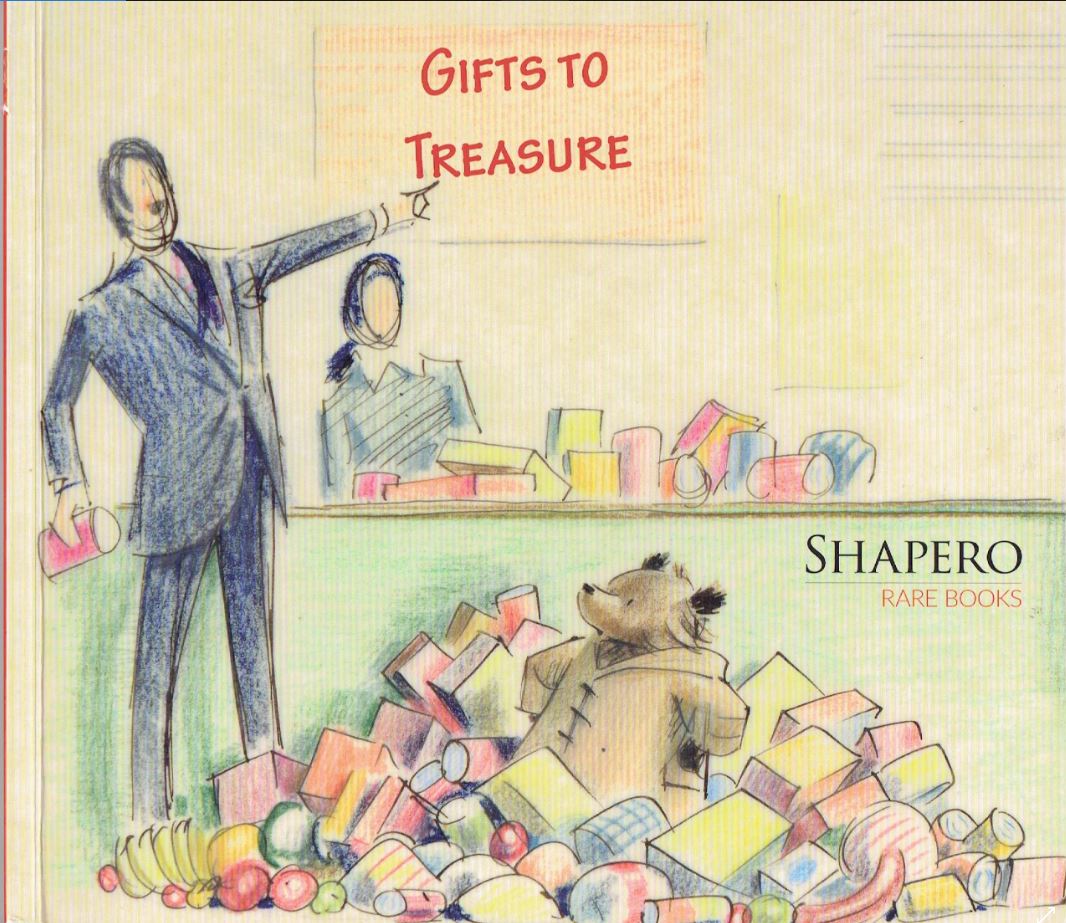 Shapero Rare Books has created a catalogue of Gifts to Treasure. Now that the giving season is over, you are free to surprise yourself with a gift, and Shapero has 155 suggestions. They have divided them into sections: Fiction, Poetry & Prose, Children's & Illustrated, Visual & Performing Arts, History & Natural History, and Special Interest & Sport. Surely you will find something suitable for your interests here. These are just a few examples.

We begin with a set of books you would have given your young children when they were new. Now that they're old and collectible, you wouldn't let the children anywhere near them. These are not meant for grubby little fingers. It is a complete set of first editions of the Pooh books, the classics for the very young by A. A. Milne. It includes When We Were Very Young (1924), Winnie-the Pooh (1926), Now We Are Six (1927) and The House at Pooh Corner (1928). Of course, that includes all the folks at the Hundred Acre Wood and Christopher Robin, who was Milne's real life son. Almost as enchanting as Milne's prose are the illustrations by E. H. Shepard, and I don't imagine there can be too many people who cannot picture the characters just as Shepard drew them. The first in the set is inscribed by Milne. The books have their dust jackets. Item 76. Priced at £14,000 (British pounds, or approximately $18,647 in U.S. dollars).

Here is a book you wouldn't have given your young children even when new. It is not a book of fantasy, although perhaps conservative economists would disagree. Item 143 is John Maynard Keynes' The General Theory of Employment, Interest and Money, published in 1936. It came during the midst of the Great Depression, when traditional economic theory that the free market will take care of itself did not seem to be working for many people. Keynes advocated a proactive role for government. Contrary to policy espoused by Herbert Hoover when the Depression set in, that is, balance the budget, Keynes advocated deficit spending to pull the economy out of recession. Shapero notes this book is "regarded as one of the most influential social science treatises of the century, it quickly and permanently changed the way the world looked at the economy and the role of government in society." £1,850 (US $2,463).

If you were really good, you may want to give this book to yourself. This is undoubtedly the most significant book of the arts and crafts, fine printing movement of the late 19th century. Item 39 is the finest work of the finest fine press, the Kelmscott Press. It is The Works, by Geoffrey Chaucer, published in 1896. Everyone today simply knows it as the Kelmscott Chaucer. William Morris had been around a long time as an artist and ardent socialist, but in 1891, he began printing exquisite editions from his fine press. It only continued for five years (plus a brief wind down period) as Morris only lived for five more years. All of his work was good, but this was his masterpiece. Printing and the Mind of Man described it as "perfect ..both in design and in the quality of printing...the last and the most magnificent the Kelmscott Chaucer." There were 438 copies printed, 425 on paper, as is this. Item 39. £65,000 (US $86,556).

Next we have an ABC book, but this is not meant for the children either. Item 100 is Hockney's Alphabet, by David Hockney, edited by Stephen Spencer. Hockney got more than a little help from his friends in writing the text. He reached out to numerous authors for a contribution for each letter. They responded with stories, poems, or other thoughts. The list of writers is impressive, including William Golding, Seamus Heaney, Margaret Drabble, Arthur Miller, Iris Murdoch, Erica Jong, Susan Sontag, Dorris Lessing, John Updike, Norman Mailer, Joyce Carol Oates, Gore Vidal, Ted Hughes, V. S. Prichett, Kazuo Ishiguro, and many others. This book was published by the Aids Crisis Trust in 1991, all proceeds going to benefit the trust. The copy has been signed by Hockney and Spencer. £600 (US $799).

This book will not appeal to everyone, only a very select group. That is the very devoted group of fly fishers. They are fanatic about their flies, those artificial insects designed to fool a fish into biting the hook. Item 133 is The Fly Fisher's Guide, Illustrated by Coloured Plates, representing upwards of Forty of the Most Useful Flies, accurately copied from nature. The author was G. C. Bainbridge, the book published in 1816. This is one of only 12 presentation copies printed, inscribed "To Charles Rogers from his sincere friend the author." This is one of the earliest books to include color plates of tied flies, the first with trout and salmon ties. £12,500 (US $16,647).