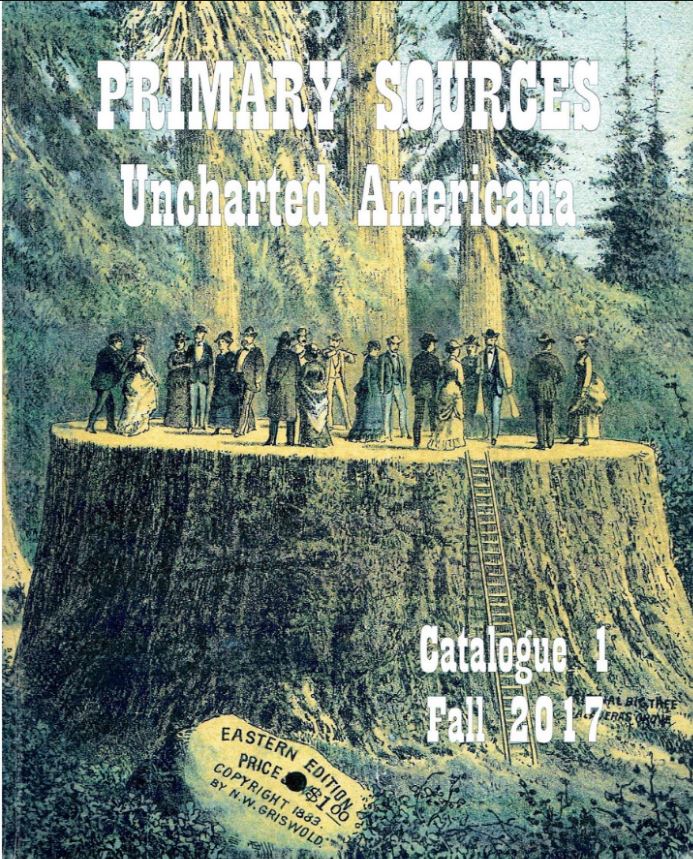 This month we review a catalogue from a new bookseller, Primary Sources Uncharted Americana, of Ann Arbor, Michigan. Their catalogue, appropriately enough, is titled Catalogue 1. As their name suggests, they specialize in "uncharted Americana," that is, items that are either unique or have not been on the market before. This covers such unique items as manuscript journals, ledgers, diaries, letters, photograph albums, and scrapbooks. The not quite unique but not seen before in the market describes items like rare or obscure broadsides and pamphlets. The "primary sources" part of their name refers to the nature of the material. These are documents and accounts by the people involved, rather than later accounts of events by outsiders. These are primary sources.

Their catalogue itself might also be described as "uncharted Americana." We've not seen any quite like it. There are only 25 items in the catalogue, but they have devoted 90 pages to them. What they have provided is an enormous amount of research into each lot. Such obscure ephemeral items are often hard to understand. Primary Sources has taken the time to fully understand what they offer and explain what they are and their significance in American history. Here are a few samples from this first catalogue.

Tours of Europe by American Indians were popular attractions in the 19th and early 20th centuries. George Catlin brought them along in the 1840s and 1850s to accompany his artwork displays of American natives. Buffalo Bill did the same as part of his Wild West show at the turn of the century. However, a pair of Catawba Indians came to England and Ireland in 1795, which appears to be the first such visit by American Indians as performers. There are only a few items left that document this visit. Here are two of them. Item 3 consists of three broadside playbills from the Theatre-Royal in Liverpool. The Catawbas were once a large tribe, settling along the Catawba River in North Carolina. The tribe still exists today, but in very small numbers. Two members of the tribe were convinced to accompany a promoter, where they appeared on the bill with some plays. The playbills from August 6 and August 10 announce their performances (the third playbill, from August 12, did not include them).

On August 6, the playbill announces, "They are INDIAN CHIEFS from the Catawba Nation in North America, dressed in real INDIAN HABIT, with the PROPER IMPLEMENTS and DECORATIONS..." It continues that they will display use of the tomahawk in war or hunting, the bow and arrow, and war dances and songs, "so often described by Travellers who have visited the WILDS of AMERICA." Perhaps that was not enough to fulfill British imaginations as to how Indians behaved, as on August 10 they announce, "...this evening will be introduced their mode of attacking & scalping an Indian Enemy illustrated by a figure so contrived so as to give a full and natural display, without exciting any of those sensations which the delicacy of the audience might dread the effects of." Priced at $3,250.

This next document is a reminder of one of the darkest moments in American history. As settlers spread through the South, they began to eye rich lands owned by native tribes. By 1828, with gold seekers rushing to Georgia, the pressure became greater. In 1830, Congress passed and President Jackson signed the Indian Removal Act. It authorized the President to negotiate deals with the so-called "Five Civilized Tribes" for their removal in exchange for land in the west and money. The Cherokees in particular resisted the move from their homeland. The government got around this obstacle when it signed a treaty with a small minority of Cherokees to cede their territory in Georgia. Congress adopted this treaty in 1836 and the Cherokees were given two years to leave. Most refused to do so.

Item 7 is the commission of Robert H. Moore, First Lieutenant of volunteers to serve in the 24th Regiment under Capt. Isaac Vincent. As such, he is, "under a requisition from the authority of the President of the United States, to serve for three months, in removing the Cherokee Indians, and defending the people of the United States from hostilities." On May 26, 1838, government forces, likely including Moore, began breaking down doors and hauling Cherokees from their homes, with no warning, no time to pack. They were marched off by "savages" on the "Trail of Tears," a horrific journey to Indian Territory (now Oklahoma) on which a quarter of the Indians died before arrival. Fewer than 100 officers received such commissions, making them extremely rare today. $3,500.

Accounts of train robberies in the Old West are always fascinating, but here is an account by the hero who foiled the attempt, together with photographs and other memorabilia of the event. It apparently was kept by the hero himself, George Laub. Here is how it unfolded. At 11:00 p.m. the night of May 25, 1905, the train had just pulled out of Bearmouth, Montana, when the engineer and fireman were confronted by an armed man. He ordered them to decouple the engine, express, and baggage cars from the rest of the train and proceed up the track. Two miles later, he ordered them to stop. He next told them to proceed to the express car. Then, he ordered Laub, the guard, to come out. When Laub refused, the robber, later identified as Clarence B. Young, threatened to blow up the car. Laub complied. Young then loaded increasing numbers of dynamite sticks to the safe until it broke open. His next step was to order the engineer to strike a match, while he and Laub entered the car. When the engineer noticed that Laub had picked up a broken timber, he blew out the match. It was all over. Laub struck Young unconscious, and the two drove the train up to the next stop. Meanwhile, the fireman, who escaped, ran back to Bearmouth to get help. It was an amateur job, Young's first attempt to rob a train, but he was sentenced to 50 years at hard labor anyway.

Item 22 consists of an annotated five-page mimeographed account of the event by Laub and a four-page account he dictated to another. There are six photographs of the damaged express car, exploded safe, and Laub himself. There are newspaper clippings from the Washington Post and Los Angeles Herald. There are congratulatory telegrams and letters, including one from Joseph K. Toole, Montana's first Governor, and Northern Pacific President Norman Eliot. Eliot gave Laub and the engineer $1,000 rewards, almost a year's salary at the time. It is all housed in a photo album and one imagines this must have been the biggest event in Laub's life. $8,500.

You can reach Primary Sources Uncharted Americana, and proprietors Robin and Laoma Beck, at 734-355-2986 or primarysources25@gmail.com.