A Wide Range of Material from Back of Beyond Books 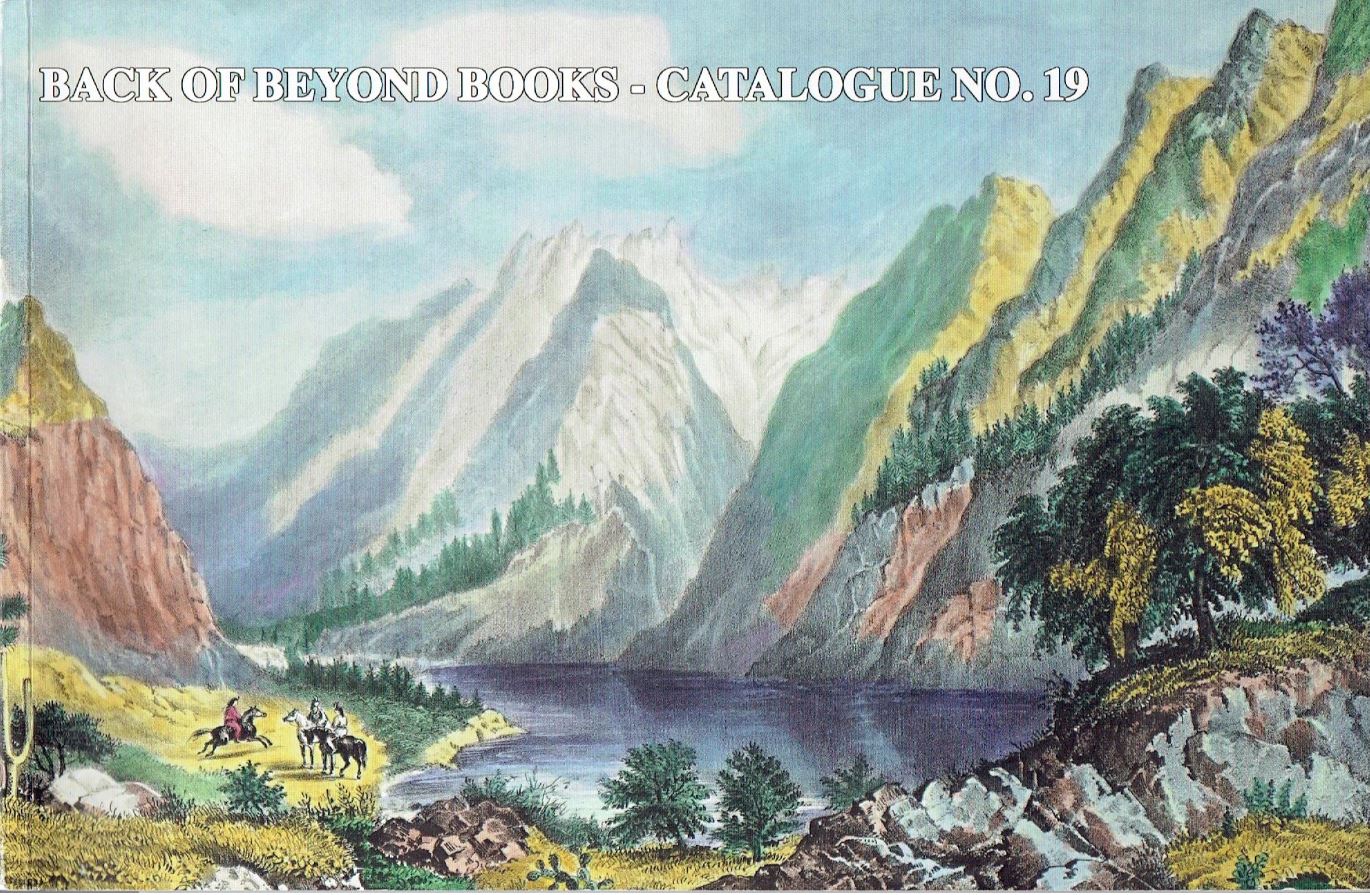 Back of Beyond Books has issued their Catalogue #19. Back of Beyond was, and still is, a specialist in books about the American Southwest, but in their last couple of catalogues have expanded the offerings substantially. Here are the subjects represented in this latest selection: Western Americana, Exploration, Mormon, Photography, Travel and Railroad, Environmental Activism, Literature, Americana, Native Americana, Promotional, Mining, Trade Catalogues, Art, and Poetry. That should provide something for everyone. We can't cover all of these topics. but here are a few of the selections to be found in this wide-ranging collection.

We begin with the official account of the most important internal expedition of America. That would naturally be History of the Expedition Under the Command of Captains Lewis and Clark... It was finally published in 1814, eight years after they returned. Lewis and Clark headed up the Missouri River, final destination the Pacific Ocean, at the behest of President Jefferson. Jefferson had only made the Louisiana Purchase a year earlier and wanted to know what was out there. It contains information about the geography, geology, flora, fauna, native peoples, and the journey. It contains Clark's detailed maps, including the large, loose folding map that was not provided with all copies, and is now missing from many that once held it. Unnumbered item. Priced at $72,500.

Item 163 contains one of America's most important documents, a preliminary printing of the Emancipation Proclamation. The preliminary draft was completed by President Lincoln on September 21, 1862. It was General Orders No. 139. It declares that all slaves within a state at war with the United States, meaning the Confederate States, would be free on January 1, 1863. It, in effect, gave the South a deadline to cease hostilities. Item 163 is a bound collection of General Orders No. 15, dated May 4, 1861, through No. 216, dated December 26, 1862. This is the first War Department printing of the Emancipation Proclamation and, Best of Beyond believes, most likely the fourth official printing of it. Item 163, $1,500.

This is one of the foundation works of the environmental movement. Item 131 is a first edition, first printing of Rachel Carson's Silent Spring. It came out in an era when few people were aware of risks to the environment caused by human activities. There seemed to be enough land, air, and wildlife for humans to do as they pleased without causing any serious damage. Carson wrote about the effects of man-made chemicals, particularly pesticides, on the environment. Most notable was her description of how DDT, then regularly used to kill insects, was also killing birds. This copy includes three reviews of the book by publisher Houghton Mifflin's Publicity Department, and a typed "With Compliments of the Publishers" leaflet to Anne Ford, a company publicist, and other items. $800.

Next is a campaign flyer from the time leading up to Prohibition in 1920. It is headed United California Industries? and depicts a saloon, gambling hall, and brothel. It was issued by Frederick Head, who was the Prohibition Party candidate for Congress from the Napa County area in 1916. He was not successful. Referring to the liquor and associated industries displayed in the drawing, Head warns us "the products of these industries are: drunkards, harlots, paupers, insane, criminals, murderers, vagrants, tramps, bums, degenerates, feeble-minded, disease and death. Are these necessary to the prosperity of the state?" In hindsight, I guess we can answer Head's question with a "yes," since California has all of these, and is nonetheless quite prosperous. Item 184. $250.

This must have been one of the earliest of automobile travel guides. C. S. Medenhall of Cincinnati published touring guides during the first two decades of the twentieth century. Item 119 is Medenhall's Guide and Road Map of Ohio for the year 1905. What percent of Ohioans owned automobiles in 1905? It must have been tiny. Perhaps it reached a few others since it says the maps are meant for "Touring Automobilists, Cyclists and Wagon Road Travelers..." The cover depicts four men riding in a very early automobile. The driver is on the right side, the front passenger holding what is likely the map. Mendenhall's Guides had maps, but mostly it was a textual set of directions on traveling from one town to another. I have not been able to determine what happened to the company, but I don't find any of their maps after the late teens. $300.

Your automobile will need to replace tires and the Kenmore Manufacturing Company was there to fill your needs. Item 245 is a 16-page trade catalogue from 1914 of Kenmore tires, along with a wholesale price list and a letter to an inquirer. This is another company I have not been able to trace. They were making automobiles a few years earlier, but I don't know when they stopped making cars and tires. Nor can I find any connection with the Sears' Kenmore brand, though both were located in Chicago. $30.

You don't know how to read to appreciate this book. Item 273 is Ed Ruscha's Then & Now, Hollywood Boulevard 1973-2004. In 1973, Ruscha drove up and down Hollywood Boulevard, capturing every inch of the 12-mile route with a camera mounted on a tripod on the back of a pickup truck. He photographed both sides in black and white. In 2004, he repeated the process, only using color film this time. The book consists of sequential running images of the buildings alongside the road, 1973 on the top half of each page, 2004 on the bottom. $375.