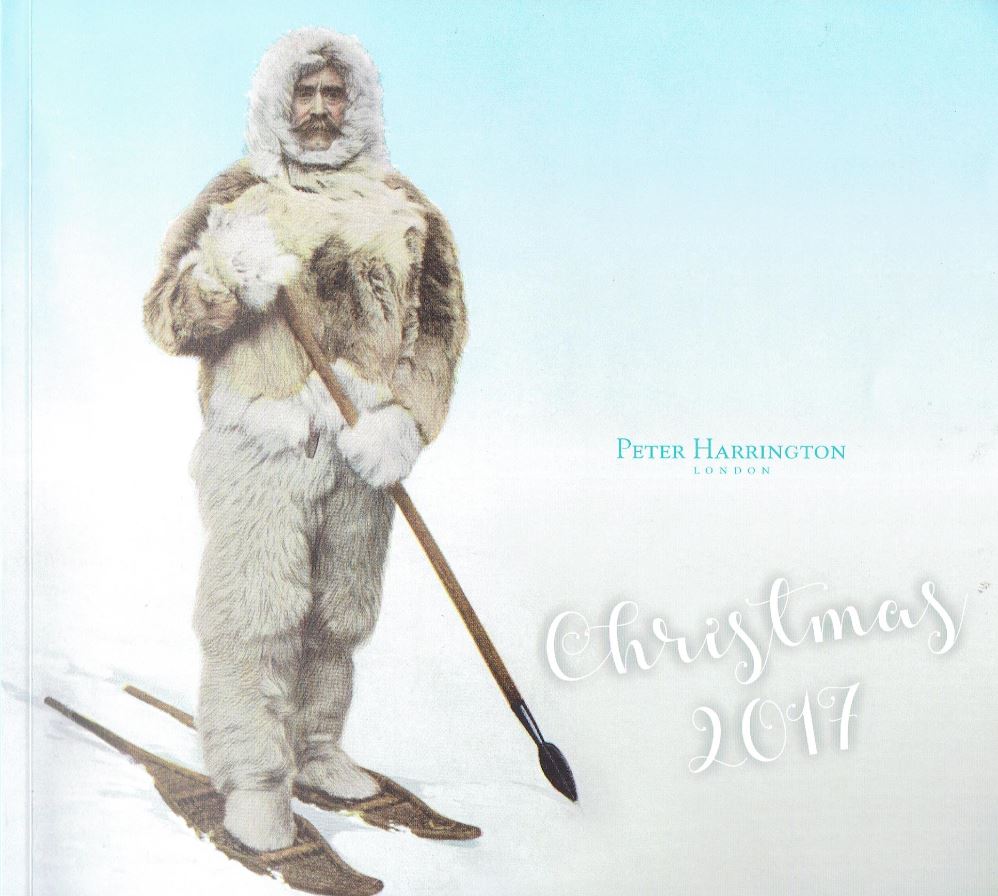 Peter Harrington has issued their Catalogue 139, or Christmas 2017. We are slightly behind, but not by that much. Besides which, After Christmas is almost as big a shopping time these days as for Christmas itself. The selection is too varied to provide a specific description of its contents. We can say it is divided into two sections, Main Catalogue and Gift Selection. The difference is the latter contains less expensive material, perhaps more suitable for giving. Still you are free to buy books from either section for yourself or anyone else. Here are few samples from this catalogue.

Despite our tardiness, we will begin with a Christmas book. It will still appeal to collectors regardless of the time of year, especially those who collect L. Frank Baum. Baum is, of course, known mostly for his Oz books, particularly the first of them, The Wonderful Wizard of Oz. After that book was published in 1900, Baum didn't come out with another Oz book for four years. After the second, he churned them out regularly for the rest of his life. In that interregnum between the first two Oz books, he wrote several others. One of them is offered as item 17 in Harrington's catalogue, The Life and Adventures of Santa Claus, published in 1902. I'm not sure whether to describe this as a fictional account of Santa Claus' life, since after all, Santa is himself a fiction. What it is is Baum's own account of Santa's childhood and growing up, which explains how he became the sleigh-riding, gift giving character he is today. This copy is a first edition and is signed, not by Santa, but by Baum. Priced at £8,750 (British pounds, or approximately $11,712 in U.S. currency).

The man on the cover looks appropriately dressed for Christmas, but that is actually proper clothing for his mission. He is Robert Peary, and his book is The North Pole. Peary led an expedition to the Pole in 1909, and is still generally believed to be the first person to reach it. I say "generally" as there are many who dispute his claim to having made it to the North Pole. The book is Peary's account of his mission. This presentation copy of the first trade edition, published in 1910, is inscribed by Donald MacMillan. MacMillan was one of the men who accompanied Peary on the journey, but had to turn back a little short of the pole due to frostbite. Item 171. £1,500 (US $2,007).

Here is a man whose signature you don't see everyday. Item 107 is a document, signed as HR, from Henry VII, King of England. Seven is not as well known as his son and successor, Henry VIII, but that is because VII did not marry six times, execute a couple of wives and several once trusted officials. In other words, he wasn't crazy. Henry VII was the last English king to win his office in battle, thereby establishing the House of Tudor. Unlike many monarchs, Henry VII was not a profligate spender. However, some considered him a profligate taxer. Call it fiscal responsibility. In this document, dated 16 November 1492, he directs certain officers to investigate ecclesiastical fraud and improper accounting in Midlands and to seize property on behalf of the King. £22,500 (US $30,117).

Here we have one more Christmas item. It is royal, but not nearly so old, almost a five century difference. Item 38 is a Christmas card. Collectors of Princess Diana will love this one. Collectors of Prince Charles, if there are any, will too. It is the official Christmas card of the royal couple for 1990. It contains a photograph of Charles and Diana, along with young Princes Harry and William. It is inscribed in Charles' hand to Eugenie. That would be Eugenie, Princess of York, whom Harrington tells us is eighth in the line of succession. Charles has written the inscription but with Diana writing her name at the end. Item 38. £1,500 (US $2,007).

Now we go back across the Atlantic to find a biography of an American music legend who died this past year. The title is Chuck Berry The Autobiography. It was published in 1987, so it excludes the last two decades of his life, but Berry was in his prime in the 1950s and 1960s. This is a first edition presentation copy, inscribed by Berry to Clarence Richmond, a high school friend. Richmond loaned Berry his first guitar. Berry recalls that favor, writing, "The best to you, Clarence, and thanks for my first guitar, that one started it all. From school mate Charles 1941. Chuck Berry, Dec. 1987. Will be at your next retirement for sure!" The book comes with Richmond's 1946 honorable discharge certificate from the Navy, his St. Louis police lieutenant's badge, and the gold watch he received on retiring. Richmond retired in September, 1987, explaining the comment about retirement in Berry's inscription. Item 25. £5,000 (US $6,693).

This is an odd couple. Item 124 is The Enemy Within, by Robert F. Kennedy, published in 1960. The book concerns the McLellan Committee investigation of organized crime, and particularly union and management corruption, with a focus on Jimmy Hoffa. Hoffa was a leader of the Teamsters' Union, who, according to legend, is buried under Giants' Stadium in New Jersey. Hoffa disappeared one day in 1975 in the company of others and was never heard from again. Kennedy has inscribed this book to a man who was a different sort of enemy, though that is too harsh a word. The recipient was Arizona Senator Barry Goldwater, whose political views were very conservative, while Kennedy's were liberal. Goldwater would go on to be nominated by the Republican Party for President in 1964, but lost in a landslide to Lyndon Johnson. Writes Kennedy, "To my old antagonist Senator Goldwater from his friend Bob Kennedy." £8,500 (US $11,378).