Charles Dickens the Subject of a New Catalogue from John Windle Bookseller and Henry Sotheran Ltd. 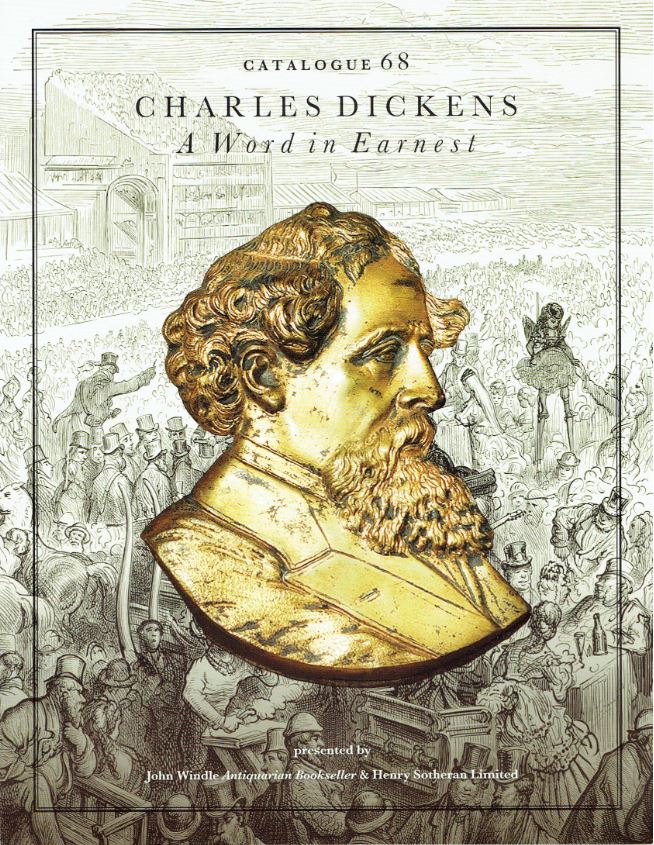 John Windle Antiquarian Bookseller and Henry Sotheran Ltd. have combined to create a catalogue of Charles Dickens A Word in Earnest. London-based Sotheran's is closer to Dickens' hometown, but Dickens paid a couple of visits to the United States along the way. He never made it as far west as Windle's San Francisco, though he made it to St. Louis in 1842, farther west than all but a few Americans in the days before the Oregon Trail and while California was still part of Mexico. Collectors of Dickens abound in America as well as England so this is a logical partnership. By 1842, when he first traveled to America, Dickens was already a well established and popular author on both sides of the Atlantic, and that popularity remains to this day among readers and collectors. Someone undoubtedly was performing A Christmas Carol somewhere near you just a few days ago.

We begin with one of Dickens' novels "in original parts." These are books that were published serially in parts. They precede the first book editions, which were generally released once all the parts were completed. Item 12 is a first edition in parts of one of Dickens' favorite and most popular novels, The Personal History, Adventures, Experience and Observation of David Copperfield the Younger of Blunderstone Rookery (Which He Never Meant to Publish on Any Account). That is the full title of what is generally known simply as David Copperfield. It is the story of an English boy, tracing his development as a boy and then as a young man. It is semi-autobiographical, much of it being based on experiences in Dickens' own life. It includes some of the dark aspects of society and the treatment of children, recurring themes through much of Dickens' work. This set contains all of the engraved plates and advertisements. It was published from May 1859 - November 1850. Priced at $17,500.

"It was the best of times, it was the worst of times..." Few opening lines are better known than that one. It comes from Dickens' A Tale of Two Cities... It is his tale of the French Revolution, the high hopes of its early days to the Reign of Terror to which it devolved. The two cities are Paris and London, the story following two individuals whose lives become intertwined. Item 15 is a copy of the first edition in cloth, published in 1859. This copy is in the rare secondary green cloth, meaning it is probably the second issue of the first edition. $15,000.

Next up we have another Dickens' first edition, published in 1934. Huh? Considering that Dickens died in 1870, why did it take another 64 years to publish one of his books? The answer is that this was hardly a typical Dickens work, and he had no intention of having it published (sort of like the fictional David Copperfield). The result was that it stayed in the family, read at Christmastime by them alone. It was finally agreed by his last surviving son that it could be published after his death, but only then if a majority of surviving Dickens' descendants voted to do so. The title is The Life of Our Lord. Written Expressly for His Children. One should not look at this as a great theological treatise. Instead, it was meant to be read around Christmas to Dickens' children. It was written in the late 1840s. Rather than theological doctrines, Dickens' focus is on Jesus' love and concern for children, the poor and downtrodden. The message was typical Dickens, even if the format was not. Item 24. $300.

Next we turn to some works not written by Dickens but about him and his books. Item 44 is The Dickens Advertiser. A Collection of the Advertisements in the Original Parts of Novels By Charles Dickens. The serial issues of Dickens' novels contained advertisements, like magazines. This book, edited by Bernard Darwin, reproduces some of the best. The booksellers note that it provides "a unique glimpse into Victorian life in England." $45.

Now we take a look at a part of Dickens' personal life. Item 54 is Dickens and Daughter, by Gladys Storey, published in 1939. The daughter was Catherine Elizabeth Macready Perugini, said to be Dickens' favorite daughter. Most of what Storey presents in this book came directly from Perugini, who died in 1929. It is most noted for bringing to light Dickens' affair with Ellen Turnan, which had been hushed up by Dickens during his lifetime, and by his family thereafter. Dickens' marriage broke down in the 1850s, with the writer's affair taking its place. Ternan was an actress, performing one of Dickens' works. She was 18, he 45 when they became involved. It was the discovery of a bracelet Dickens bought for Ternan, that Catherine Dickens found, that led to the break down of their marriage. They would remain married the rest of his life, but with little contact during his last decade. $80.

Here is a guide that will help you determine the value of Dickens' first editions...sort of: The First Editions of the Writings of Charles Dickens and Their Values. A Bibliography, by John E. Eckel. There is one problem with this price guide. It was published in 1913. Prices in general have risen a little over one hundredfold since 1913, but not all books have appreciated equally. The best have appreciated more, those no longer particularly desirable less. This book not only covers first editions of his books, but periodical, newspaper, and other writings associated with Dickens. Eckel used contemporary auction records and catalogues to determine values. Item 47. $100.

The final section of this catalogue, "Penny Dickens," offers books for prices akin to those in 1913, though naturally these are not original Dickens' firsts.