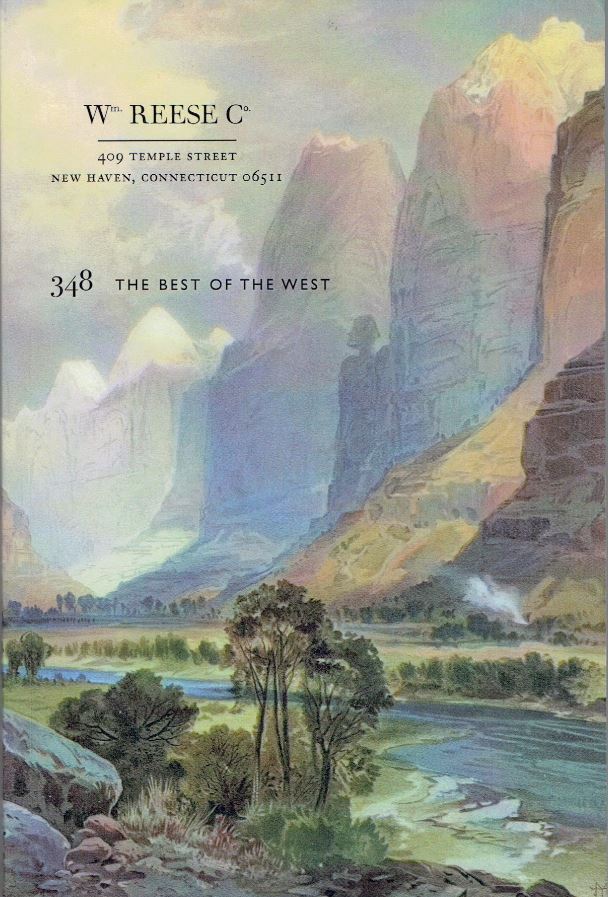 The Best of the West.

The William Reese Company has published their 348th catalogue, Best of the West. That is, not coincidentally, the same name as that of a bibliography of the West that Reese published last year. That bibliography of 250 books, dating back as far as early Spanish explorations, covers what Reese describes as "key items for a comprehensive collection of Western Americana." The items in this catalogue are taken from this bibliography, either primary entries or books mentioned in the notes. They are significant items for those who collect the American West. Here are a few.

This book is the first account of the first American-owned settlement on the west coast. It didn't last for long. Gabriel Franchere was among those who sailed from the east coast around Cape Horn to open the American fur-trading settlement at the mouth of the Columbia – Astoria. It was the idea of wealthy American businessman John Jacob Astor. Settled in 1811, it was a primitive fort, a dull place to be. With the War of 1812, Astor no longer was confident he could defend the fort from the British if necessary. Ownership of Oregon was still under dispute. Franchere also provides the first account of the overland journey back east after Astoria was sold to the Canadian fur-trading Northwest Company. He returned through Canada to Montreal, where this first account (in French) was published in 1820. The title is, Relation d'un Voyage a la Cote du Nord-Ouest de l'Amerique Septentrionale, dans les Annees 1810, 11, 12, 13, et 14. Item 47. Priced at $6,500.

Forty years later, the Oregon Territory (including today's Washington State) had been ceded by treaty from Britain to America, and California had been seized from Mexico during the Mexican War. Here is a look at California during its period of transition. William Redmond Ryan also sailed around the Horn, heading to California to fight with New York volunteers during the war. With the war soon ending, he sought "relief from the monotony of civilized life, in a more congenial and adventurous existence amidst the wilds and mountains of California." He spent some time digging for gold, but found trading goods, arms in particular, a more lucrative enterprise. Ryan provides a detailed account of his sea journey and time in California along with a geographical description of the land. Howes states, "Both text and illustrations are among the best of the period." Ryan's book is Personal Adventures in Upper and Lower California, in 1848-9, with the Author's Experience at the Mines... published in London in 1850. Item 134. $2,500.

The discovery of gold quickly brought fortune seekers to California, soon followed by other settlers. However, the journey overland was treacherous, and finding your way a challenge in the days before AAA guide books and GPS. According to Howes, this was the "best handbook for the central route available at the time." Published in 1852, item 67 is Horn's Overland Guide, From the U.S. Indian Sub-Agency, Council Bluffs, on the Missouri River, to the City of Sacramento, In California; Containing a Table of Distances...With a Complete and Accurate Map. Hosea B. Horn knew the journey well. The map not only shows the primary route, but the various cut-offs, which Horn had also traveled. This guide was unusual and particularly helpful as Horn provided distances and descriptions along the route. $7,500.

Next is a very rare account (second rarest early Colorado imprint according to Howes) of events that led to the removal of the Ute Indians from their lands in Colorado. The Indian agent in the area, Nathan Meeker, made demands of the Utes on their territory, which led to a confrontation. Meeker called for reinforcements. The Utes attacked, killing Meeker and ten others, taking his wife, child, and a few more women hostages. Troops came from Wyoming, and some of them were killed in battle. That provided Congress with the "justification" to do what Colorado settlers had been demanding all along – removal of the Utes, the last Indians still permitted to live in Colorado, out of the state. They were forced from their homeland to eastern Utah. Item 34 is an account (from the white man's perspective) of the incident by Thomas F. Dawson and F. J. V. Skiff: The Ute War: A History of the White River Massacre and the Privations and Hardships of the Captive White Women Among the Hostiles on Grand River, published in 1879. $4,000.

Here is a very detailed look at America's Indians as of the mid-19th century. Published in six volumes from 1851-1856, item 137 is Henry Schoolcraft's Historical and Statistical Information Respecting the History, Condition, and Prospects of the Indian Tribes of the United States. Schoolcraft was noted as an explorer, being the first to find the headwaters of the Mississippi. He spent much time with the natives, providing him with both first-hand knowledge plus much gathered through research. This work was created through the direction of the Bureau of Indian Affairs. Field, in his Indian bibliography, was highly critical of Schoolcraft's learning and scientific education, not to mention his presentation, but goes on to say, "badly arranged, and selected as it is, the work contains a vast mass of really valuable material. It has indeed performed a very important service for Indian history, in collecting and preserving an immense amount of historic data. Vocabularies of Indian languages, grammatical analyses, legends of various tribes, biographies of chiefs and warriors, narratives of captivities, histories of Indian wars, emigrations, and theories of their origin, are all related and blended in an extraordinary and perplexing manner. A very large number of beautiful steel engravings, representative of some phase of Indian life and customs, are contained in the work, but the most valuable of its illustrations are the drawings of weapons, domestic utensils, instruments of gaming and amusement, sorcery and medicine, objects of worship, their sculptures, paintings, and fortifications, pictograph writing, dwellings, and every form of antiquities, which have been discovered." It doesn't sound like he missed anything. $14,500.