The Latest from The Veatchs Arts of the Book 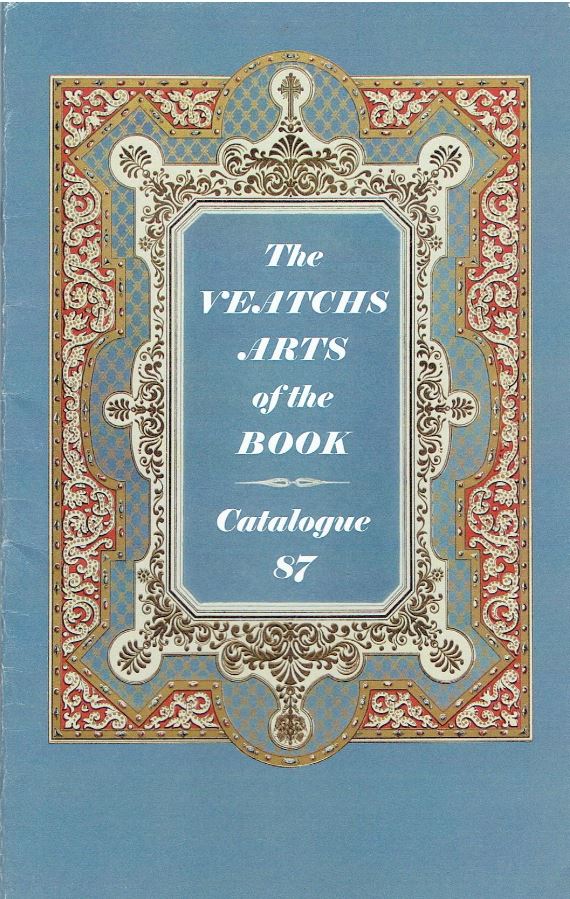 The latest from the Veatchs Arts of the Book.

The Veatchs Arts of the Book has released their Catalogue 87 Fall 2017. It includes books and various ephemeral items in the book arts. The latter ranges from portfolios of artwork to individual broadsides, specimen books, proofs, collections of items, and more. Anyone who appreciates books as an expression of art will enjoy seeing what is in this catalogue. Here are few specimens.

We begin with a later edition of T. S. Eliot's The Waste Land. This long poem was originally published in 1922, but this edition is from 1961. It was published by Faber & Faber, for whom Eliot served as a director for most of his adult life. The printing was done in Dante type by Giovanni Mardersteig on the hand-press of the Officina Bodoni in Verona. This is a signed limited edition, one of 300 copies, signed when Eliot was 73 years old. Item 22. Priced at $3,250.

Next is one of the greatest color plate books of America, Victoria Regia; or the Great Water Lily of America, published in 1854. It contains six plates, one by the author, John Fisk Allen, and the other five by William Sharp. The Amazonian native water lily was illustrated in Salem, Massachusetts, up the road from Boston where the book was published. Victoria Regia is a giant lily, leaves up to six feet long, flowers over a foot in diameter. It can support the weight of a child. Originally discovered in the Amazon, it was brought to England in the first year of Queen Victoria's reign, hence its name. Like the lily, William Sharp immigrated to America. He came to America around the time the lily went to England. He learned his techniques in Europe, becoming the first chromolithographic printer in the States. According to Reese, Sharp "printed colors with a delicacy of execution and technical brilliance never before achieved in the United States." The book is short, 16 pages plus the plates, but the size is large, 20 ½ x 26 ½, to properly display the lilies. Item 3. $55,000.

Here is another signed book, but one with many more signatures. Item 37 is Hockney's Alphabet, illustrations by David Hockney, edited by Stephen Spender, and published in 1991. Hockney has created 26 whimsical letters, one for each letter in the alphabet. He then sought contributions from different writers for each letter. They each provided a story, poem, or other thought. The only writer that declined to participate was Normal Mailer, but he wrote such a polite refusal that his response is also included. This is one of 300 copies, and along with Hockney and Spender, it has been signed by 22 of the contributors, including Doris Lessing, Seamus Heaney, Susan Sontag, Joyce Carol Oates, John Updike, Erica Jong, Arthur Miller, William Golding, V. S. Prichett, Margaret Drabble, Iris Murdoch, and even Mailer. It was published by Faber and Faber, though long after Eliot was gone, on behalf of the Aids Crisis Trust. All proceeds went to benefit the trust. $2,000.

Item 66 is The First Set, Selected Ephemera 1974-1994. It consists of approximately 185 printed examples from the first 20 years of the Pentagram Press, based in Minneapolis. Actually, it isn't all from Minneapolis as prior to 1987, Pentagram was located first in Milwaukee and then Markesan, Wisconsin. According to the University of Delaware Library, which holds a substantial collection of their material through 1999, it began as a one-man operation of Michael Tarachow, who did everything including designing, typesetting, printing, binding and publishing. He even wrote some of the poetry the press published. Pentagram is noted for very fine press work, limited edition books, and works by midwestern poets. This collection is housed in three cases and includes everything from a printed button to a musical scroll, printed bag, announcements, greetings, small keepsakes, broadsides, letterheads, bookmarks, bookplates, business cards, and booklets. $1,300.

Here is a history of printing, Typographia: An Historical Account of the Origin and Progress of the Art of Printing...with a Description of Stereotype and Lithography, by Thomas Curson Hanard. Don't look for any up-to-date information about printing. It was published in 1825. This is a large book, 939 pages, 28 plates, and many text illustrations. The Veatchs describe it as "a comprehensive manual with a nice section on presses." Item 34. $550.