A Variety of Material from Raptis Rare Books 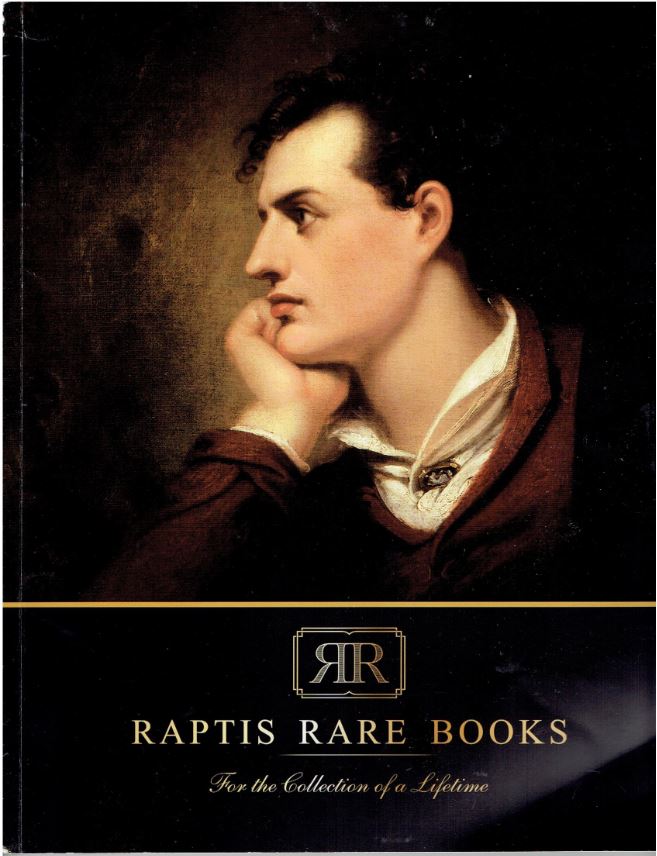 Raptis Rare Books has issued an untitled catalogue, but we know what is in it from the table of contents. Here it is: Religious & Philosophical Thought, History & Geography, Americana, Heroes & Leaders, Scientific Thought, Economics & Finance, Literature, From Book to Film, Music & Lyrics, Photography, and Children's Literature. With that, we will proceed inside to take a look at a few of the items offered.

We begin with what might seem an odd choice – the seven-volume set of Herbert Hoover's Addresses Upon the American Road. Surely there must be more important books here than the extensive thoughts of the leader of one of the most disastrous presidencies in American history. However, this set is inscribed, all seven volumes, to his friend Lewis Stevens. Who knew Hoover had such a sense of humor? In volume 1 Hoover writes, "To my good friend Lewis Stevens from Herbert Hoover." In volume 2, "Same as volume 1 with affection Herbert Hoover." In volume 3, "Same as first and second volumes plus more affection Herbert Hoover." In volume 4 he writes, "What more do you want? Herbert Hoover." For volume 5, "This one marks the last of the least but has the spirit of the other four volumes H.H." In volume 6, "This is the next to the last. You would never read this far." For volume 7, "This is the last volume so far published. These could be more any adult education." That last inscription makes it sound like Hoover was considering another volume, but this was the last. They were published from 1938-1955. Item 48016. Priced at $3,800.

Next we have a book from another disastrous presidency, though for a very different reason, with a most amazing inscription/provenance. The book is The Memoirs of Richard Nixon, with no need to further list the name of its author. It was published in 1978, four years after Nixon resigned as a result of the Watergate scandal, impeached by the House and with certain conviction by the Senate looming. Nixon inscribed this copy to his first vice-president, Spiro Agnew. Agnew also resigned. While in Nixon's case his resignation came about because of his participation in the cover up of others' crimes, for Agnew it was good old corruption. Agnew had taken bribes for contracts during his term as a county executive and later as Governor of Maryland, and was still receiving payments while Vice-President. Naturally, Agnew proclaimed his innocence – don't they all – but pressure mounted in the White House for him to resign. Nixon was already deep in the Watergate crisis and didn't need this concurrent awful publicity. Agnew resigned and took a generous deal. He pleaded no contest to one charge and got a small fine and probation. However, Agnew resented the White House pressure for him to resign, believing a sitting vice-president could not be prosecuted, and resented the role of his running mate as well. Nixon periodically attempted to reconcile with his former vice-president. This inscription is a small attempt. Nixon writes, "To Ted and Judy Agnew, With deep appreciation for their years of dedicated service to the nation. From Dick Nixon, 5-12-78." It didn't work. They did not reconcile and Raptis tells us they never spoke again. Item 58052. $4,800.

Fitzgerald is one of the most highly regarded names in twentieth century American literature, but not so much for Zelda. F. Scott was a great writer, but Zelda was more a subject for novels than a writer of one. The Fitzgeralds had an over-the-top, rocky relationship, but it deteriorated as Zelda sank deeper into mental illness. She was first admitted to an institution for help in 1930, emerged to return home, but by 1932 was in a clinic at Johns Hopkins Hospital. It was here that she was encouraged by her doctor to write. In six weeks' time, she whipped off this novel, Save Me The Waltz. It was semi-autobiographical. Scott was not pleased. His issue was not that it revealed too much about them personally. It was that it used some of the same material he planned to use in his next novel. He forced her to make revisions. Zelda's book was released later that year. It was not a best-seller. Zelda continued to drift further into insanity and never wrote another novel. Item 56050. $4,800.

There is no more famous name in mountaineering than that of Sir Edmund Hillary. He was the first to reach the peak of Mt. Everest, after a century of unsuccessful attempts. That may sound surprising as now hundreds make it to the top every year. Since Hillary, it has been climbed by a blind man, a 13-year-old, a man with no legs, another with no arms. Two people have reached the summit 21 times. Still, the first successful climb in 1953 remains a historic event. Item 48004 is The Conquest of Everest, by mission leader Sir John Hunt, with a chapter by Hillary. This copy is inscribed by Hillary to an unlikely recipient – Burl Ives. Burl Ives was, logically, a burly man, an actor though more notably a folk singer. He was a favorite for children's songs in the 1950s and its unimaginable growing up in that era and not hearing his rendition of Big Rock Candy Mountain or some such classic. But, what was his connection to a British mountain climber? The answer is the two were honored at a New York Public Library's Books and Authors Luncheon in 1954. Hillary has inscribed the book, "To Burl Ives In memory of many pleasant melodies." It is also signed by two other members of the mission. $2,000.

This is a 1908 letter from President Theodore Roosevelt which reads, "The head of Lincoln grows upon me more and more. I think it is one of the finest things I have ever seen. I especially like it when seen from the right front. Theodore Roosevelt." All right. That is really creepy. Sounds like it comes from a horror story, this alien head growing out of Roosevelt's body. Actually, there is a much more reasonable explanation. The letter was written to sculptor Gutzon Borglum, who created a bust of Lincoln for Roosevelt. He didn't literally mean growing upon him, but in the sense he came to appreciate it more with time. Borglum was still sculpting normal size works at this time, but a couple of decades later, he would become famous for sculpting the heads on Mt. Rushmore. There you will find the four gigantic presidential heads carved out of the mountain, including Lincoln, and next to him, Theodore Roosevelt. Item 52025. $6,000.