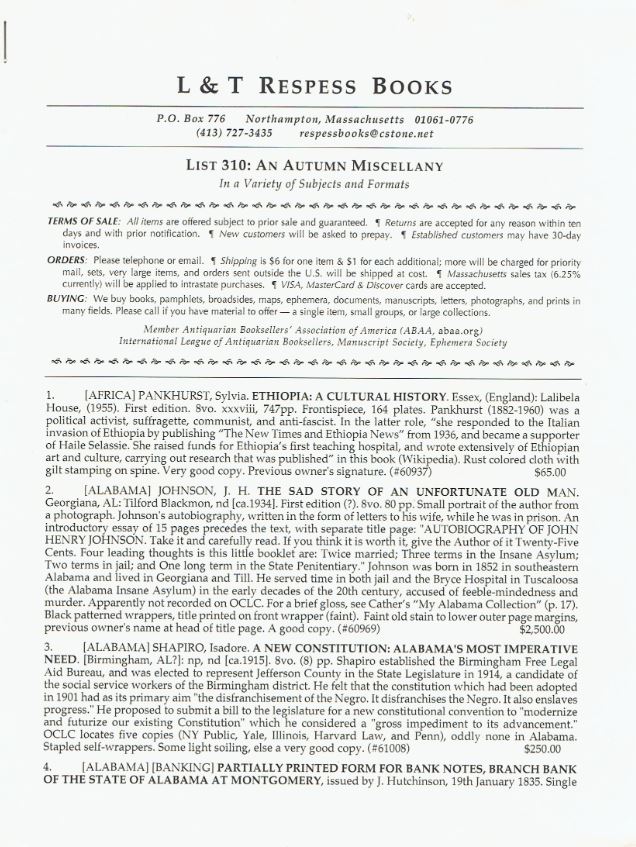 L & T Respess Books has published An Autumn Miscellany in a Variety of Subjects and Formats. We will leave our introduction at that as I really cannot find a unifying thread to describe the material. It is just too varied. We will note that L & T Respess is located in Northampton, Massachusetts, and there is a book fair taking place there on December 2 and 3. Respess will be exhibiting at the fair so drop by and see what they have. Here are a few examples.

Henry David Thoreau is best remembered for his years of isolation on Walden Pond. However, even the great isolationist eventually succumbed to the tourist haunts of Cape Cod. That's an exaggeration. When Thoreau traveled to Cape Cod a few times in the mid-19th century it was hardly the tourist place it is today. They weren't cramming Route 3 all the way from Boston for a summer weekend on the Cape back then. Much of it was almost as isolated as Walden, more suitable to Thoreau's taste, with a few small towns. Item 131 is his description of Cape Cod, published posthumously in 1865, edited by his sister, Sophia. This copy is in the "A" binding of the four, no priority known. Priced at $350.

One of the most popular genres of literature in America during the 18th and 19th century was the Indian Captivity. They were various tales of whites captured by Indians, generally alleged to have been severely mistreated, but with the author eventually escaping (or else they couldn't tell their story). Sometimes they were real, other times exaggerated or completely made up. There is debate on the accuracy of this one, Memoirs of Captivity Among the Indians of North America, from Childhood to the Age of Nineteen. The author was John Dunn Hunter, the "Dunn" coming from a benefactor, "Hunter" from his skill. Hunter claimed he had no recollection of his life before capture or who he was. He was originally taken by Kickapoo, but sold or passed around among various tribes before emerging into white society. Offered is a copy of the second edition from 1823, same year as the first. Hunter didn't live much longer. He went to Texas and represented the Cherokees in an attempt to get a land grant from Mexican authorities. When this failed, he joined what is known as the Fredonian Rebellion, pitting some white settlers wishing to set up an independent republic, against others who had Mexican government backing. He attempted to place the Cherokees on the rebels' side, but when the rebellion failed, the Cherokees were angered by Hunter's attempt to involve them and executed him. Item 27. $450.

Who was Button Gwinnett? With the exception of one particular group of collectors, most people have never heard of him. And yet, if you look at the Declaration of Independence, you will find his name at the top of the left column of signatories. Gwinnett was a representative to the Continental Congress from Georgia. However, Gwinnett was not particularly successful in his business ventures, nor a notable leader outside of local politics in Georgia. After signing the Declaration he returned to Georgia, had a bitter rivalry with another Georgian, challenged him to a duel, and came out the loser. He died less than a year after signing the Declaration of Independence. The result is he never signed many documents, either before the Revolution, and certainly not in his short life after it began. Therefore, his signature is the rarest among all of the signers of the Declaration of Independence, and consequently, the most desirable among collectors of the signers. Only 51 of his signatures are known. To learn more about Button Gwinnett, here is the book you need: Button Gwinnett, Signer of the Declaration of Independence, by Charles Francis Jenkins. Unfortunately, Gwinnett did not sign it. It was published in 1926 and I don't know whether it answers the most intriguing question about Gwinnett – why did his parents name him "Button?" Item 114. $125.

Here is a biography of a man more obscure than Button Gwinnett: Biographical Sketch of Linton Stephens (Late Associate Justice of the Supreme Court of Georgia). Who was Linton Stephens? Well, he was an Associate Justice of the Georgia Supreme Court, for sure. He also served as a Lieutenant Colonel for the Confederacy during the Civil War, was an accomplished lawyer, reluctant politician. If he is remembered at all today, it was because his older half brother, Alexander Stephens, served as Vice-President of the Confederacy. This book is filled with letters Linton wrote to his brother, and they reveal some of Alexander's thinking as well as that of Linton. Linton justifies slavery on the basis that someone had to do the menial jobs, so that shifting some of them to white people would not increase the overall good of humanity, so why bother? Obviously, the brothers were very close, though Alexander was over a decade older. Linton also died a decade earlier. This biographical collection, edited by James Waddell, was published in 1877, five years after Linton died. It is inscribed by Alexander, who at this time was serving as Governor of Georgia. Item 52. $300.

Item 120 is a letter written by George Bernard Shaw during rehearsals for the premier of his play Pygmalion in London in 1914. It was written to Edmund Gurney, who played the part of Alfred Doolittle. Shaw was not only a writer, but had been a critic, so, logically enough, his letter is critical. He tells Gurney he wrote the part for him and he should not play the part so "broadly." Shaw also has some critical comments about the performance of Mrs. Patrick Campbell (the actress actually used that as her name) for whom he wrote the part of Eliza. He says there is no point in his coming back to rehearsals "until Mrs. Campbell is tired of moving the furniture and begins to think about her own part a little..." It is interesting that he comments about Mrs. Campbell as they had a long-running romance, but a nonphysical one, mostly carried on through letters. $3,000.

Here is another letter from a missus, in this case, Lucretia Garfield, at this point the widow of President James Garfield. It is dated February 27, 1882. Garfield died in September of the previous year, the victim of an assassination. The recipient was Harriet Blaine, whose husband was Garfield's Secretary of State. James G. Blaine, aka "the continental liar from the state of Maine," had delivered a complimentary speech for which Mrs. Garfield was grateful. She also notes, "hopes, ambitions, aspirations pure & high, and almost assured, all swept away!" Blaine would be the Republican nominee for President in 1884, wherein he was given the above derogatory moniker. It was perhaps the dirtiest presidential race prior to 2016, with Blaine being the first Republican presidential nominee to lose since before the Civil War, the election swinging to Democrat Grover Cleveland. Item 46. $1,500.