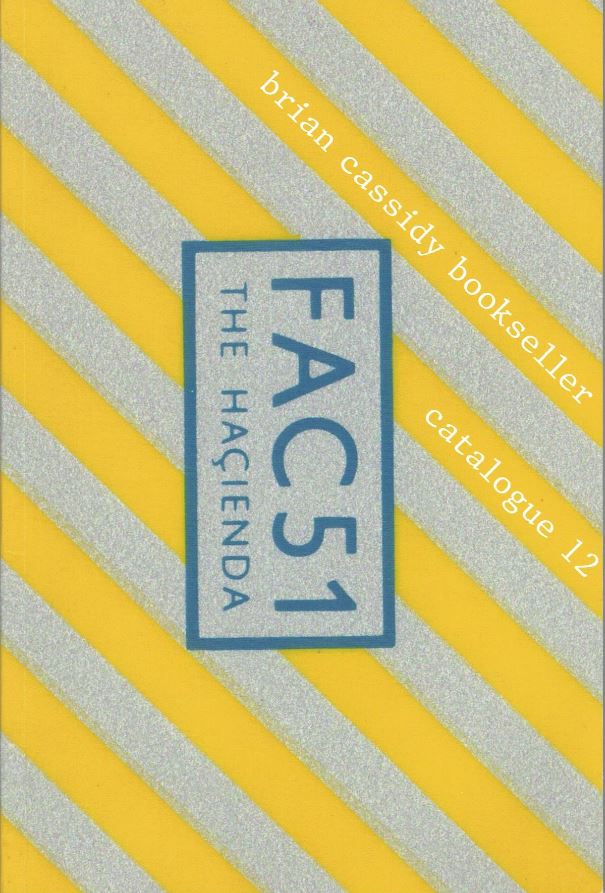 Brian Cassidy, Bookseller has issued Catalogue 12. There is no further explanation given and I suspect that is because he has as much trouble describing what is in here as I have. I could take the easy way out and call it a "miscellany," but that would be cheating. It isn't a typical miscellany. It is mostly unusual, avant-garde or counterculture or whatever is the term for this particular type of unusual material. Lots of beats, punks, and the like in here. There is much from the 50s and 60s, when I grew up, but so many of these publications and writers are unfamiliar to me because I didn't grow up in New York City or California. It didn't always reach the hinterlands. These were writers and publishers who didn't care who they offended, and others who probably did and then set out to deliberately to offend them. It was a fun time. Of course, there are other items from earlier, and later times, and a few things for "normal" people. We will describe a few items and let you decide for yourself what this catalogue should be called.

I don't know if this is quite "counterculture," though it certainly isn't mainstream. It is a set of 16 issues in four volumes of Jay's Journal of Anomalies, published 1997-2000. Ricky Jay is a magician, actor and writer. He is also a collector of books and ephemera related to magic and other sideshow type of arts. For four years he published this magazine of material taken from his personal collection. It includes "conjurers, cheats, hoaxters, pranksters, jokesters, imposters, pretenders, side-show showmen, armless calligraphers, mechanical marvels, popular entertainments." Jay later used these journals for a book of the same name. Cassidy notes that "individual issues are uncommon, sets scarce," and that they have it "on good authority" that this set came from the first official subscriber. Item 12. Priced at $3,200.

Next we have an exhibition catalogue for a major event in the career of pop artist Andy Warhol. Warhol had already achieved significant recognition when the Curator of the Philadelphia Institute of Contemporary Art put on this exhibition in October of 1965. Curator Sam Green wanted to make the most of the opportunity so he gave out thousands of invitations to a gallery that could hold 300. He hoped this would be enough to fill the hall. Green underestimated Warhol's reputation. Instead, thousands arrived. Warhol attended the opening and came to realize that it wasn't so much his art as it was he himself who had become a phenomenon. The catalogue for this important event contains some of his iconic art as of the time, with the wraps featuring his most famous image of all, the Campbell Soup cans. Item 62. $3,000.

It may be a little late to use this book for its intended purpose, but it is still a reminder of the good old days. Item 14 is Nocturnal Paris: The Only Genuine Night Guide for Gentlemen; An Indispensable Companion for the Stranger. Paris After Dark: Containing a Description of the Fast Women, Their Haunts, Habits, Etc... You know what this is. Sadly, these fast women are very slow now, this edition of the guide which ran from 1873-1895 coming from 1877. The English language of the guide is a tip off that it was designed for Englishmen visiting Paris. The anonymous British author implies the ladies of Paris were far more inviting than their London counterparts. He provides guidance as to the neighborhoods where they could be found, in some cases giving specific addresses and reviews of specific women. We will not ask how he obtained the information on which to base his reviews. Cassidy informs us that at the time, French police estimated some 400,000 transactions were taking place daily, and that author Maxime du Camp wrote that there were 155,000 officially sanctioned prostitutes, but that over 700,000 had been arrested for illicit transactions. Considering that Will Durant estimated the population of Paris in 1880 to be 650,000, this is a very high percentage of the residents of Paris. $3,750.

This is something of an unintentional work of art. It is called The Book of Bread, by Owen Simmons, published in 1903. Simmons loved bread and was an expert on it. He wrote up his book which is somewhat technical in nature and commissioned some fine photographs of his subject. The result is 12 full-page color illustrations, eight tipped-in halftones, and two tipped in original silver prints. These large, close-up photographs of bread have come to be viewed as almost surreal art rather than a technical bread-baking guide. Item 74. $2,500.

Here is a truly ugly novel, Negotiable, by Edwin M. Thomas, published in 1908. Not having read it, I will have to go with Cassidy's description of the plot line in this virulently racist book. A young, northern businessman, first name "Harvard," takes over a manufacturing company in Alabama from its aging owner. He soon finds himself in a labor dispute with his black workers, whom the narrator describes as "dissolute and worthless...living a life of vagrancy, debauchery and crime." Despite warnings from his foreman that he does not understand the Negro, Harvard decides to implement a policy of kinder treatment, thinking this will change their attitudes. Instead, they become more undisciplined. Realizing he cannot solve his labor problem with black workers, Harvard fires them all and replaces them with immigrant European workers. However, when he discovers that his southern belle love interest has been attacked by a "burly negro," Harvard turns to the southern way of justice. He organizes a lynch party. The narrator explains this is necessary because even in the South, "the negro's friends" have infiltrated the courts with bribes and perjury, making extra-legal justice a necessity. The book follows with a description of the lynching from which Cassidy has spared us in his catalogue. Item 109. $1,250.

Item 100 is a typescript account, with 49 silver prints mounted throughout, headed Judgment at Nuernberg [sic]. It was prepared by U.S. Air Force officer Ellis C. Pyle in 1953. Pyle was chief interrogator in Germany in 1945. As such, he interviewed and came to know several Nazi leaders, Hermann Goring in particular. In this remembrance, Pyle describes the proceedings and quotes from some of the Nazis he interviewed. Speer, Hess, Ribbentrop, Doenitz, and Streicher are among the infamous names about whom he writes. He describes Goring as having a "charming manner" and "sense of humor." He notes Goring's sorrow when thinking of his family, while showing no remorse about his murderous career. Goring killed himself before he could be executed. $3,500.