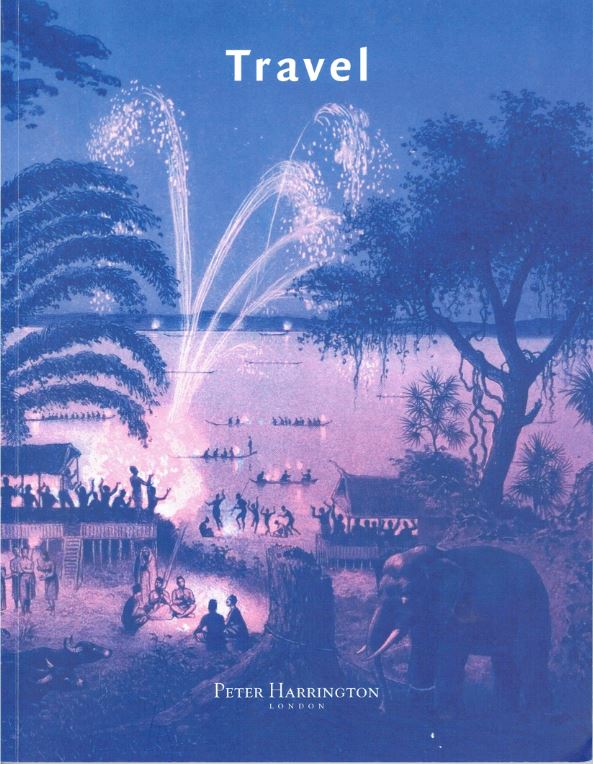 Peter Harrington has issued a new catalogue of Travel. The catalogue is new, the travels old. Most are from the 18th or 19th century, a few much older. They do come from times when European knowledge of far off lands was limited. In other words, these are discovery travels, not tourist visits. While anywhere is fair game, there was not as much exploration of the Americas at this time, so Asia and the Middle East, Africa, and the polar regions are the destinations of most of these travels. Here are a few of the accounts found in this catalogue.

We start with the book Harrington describes as "the first definitive European work on the Chinese empire." It is written in French, Description geographique historique, chronologique, politique, et physique de l’Empire de la Chine et de la Tartarie chinoise, published in 1735. It contains four volumes and is filled with a wealth of information about China. It covers everything from geography to political institutions, education, language, medicine, science, customs and artifacts. The book includes 43 original maps by Jean Baptiste Bourguignon, described as "the finest cartographer of his time." The book was the work of French Jesuit historian Jean-Baptiste Du Halde. Ironically, Du Halde never set foot in China. He gathered manuscripts from 27 Jesuit missionaries, along with Chinese sources. Added were a few unpublished accounts by others, including Bering, who visited Kamchatka and also parts of the Alaskan coast. It was the first European description of Alaska. Item 47. Priced at £37,500 (British pounds, or approximately $49,392 U.S. dollars).

In 1911, the North Pole having finally been reached (allegedly) a couple of years earlier, there was a race to be first to reach the remaining pole. It was between Norwegian Roald Amundsen and Englishman Robert Falcon Scott. Here is the account by the winner: The South Pole. An Account of the Norwegian Antarctic Expedition in the "Fram," 1910-1912. Amundsen did a far better job of planning for his attack on the Pole. He was better equipped, planned his supply stops better, was more skilled at navigating the icy conditions, picked a shorter route, and was fortunate enough to have better weather. He reached his destination on December 14, 1911. A little over a month later, Scott reached the South Pole second, and when the weather deteriorated, was unable to make his way back, freezing to death on the ice. Item 3 is the 1912 London first English edition of Amundsen's account, which must have been bittersweet reading for the British having lost the race. £3,000 (US $3,928).

This book represents both a monument to exhaustive study on a subject and an important, if not fully appreciated, scientific discovery. Alfred Russel Wallace traveled to the Malay Archipelago to study its natural history, releasing his findings in this 1869 book, The Malay Archipelago: The land of the Orang-Utan, and the Bird of Paradise. A Narrative of Travel, with Studies of Man and Nature. He traveled from island to island, covering 14,000 miles during his eight-year sojourn. In the process, he collected an astonishing 126,500 specimens, including 200 new species of birds and over 1,000 of insects. The two volumes cover Wallace's findings and his exploits in gathering the data, including his attempts to capture a bird of paradise, track down the orang-utan, and dealing with the natives, many of whom had no previous contact with Europeans. However, what is most notable is Wallace's theory to explain the similarities yet differences between species isolated from each other on separate islands. Wallace returned home in 1854, and his conclusion was the explanation must be evolution by natural selection. You might say, of course it was, but Charles Darwin, while having already reached a similar conclusion from his work in South America, had not published his theory. Wallace came to essentially the same conclusion separately. In fact, he sent his findings to Darwin as a fellow, notable natural history scientist. Darwin realized he needed to publish his findings quickly or be left behind. The result was that Darwin and Wallace jointly published a paper prior to Darwin's book On the Origin of Species. Wallace had no problem with most of the credit going to his fellow scientist and became one of Darwin's greatest disciples. Item 139 is a copy of Wallace's book, published 15 years after he returned to England. £5,750 (US $7,530).

Here is a book that takes us to the Americas, Views of Ancient Monuments in Central America, Chiapas and Yucatan. It is a limited edition (300 copies) collection of 25 outstanding illustrations by artist Frederick Catherwood, published in 1844. Catherwood accompanied American explorer John Lloyd Stephens on two journeys to Central America in the late 1830s and early 1840s. While there, they chanced upon some ancient Mayan ruins. They had visited ancient Egyptian ruins earlier and found these so different that he concluded they must have been built by an ancient native civilization. Stephens wrote two books about the Mayan ruins which Catherwood illustrated. However, this is a folio book of illustrations, and the larger format makes the images much clearer than they were in the earlier smaller format books. Item 29. £45,000 (US $58,988).

This is a description of a harebrained scheme that never came to pass: The Flooding of the Sahara. An Account of the Proposed Plan for Opening Central Africa to Commerce and Civilization from the North-West Coast... The author was Donald Mackenzie, and the date was 1877, which was not long after the opening of the Suez Canal. This would have been a more monumental project. There are depressions in the Sahara where the land is below sea level. Mackenzie reasoned these could be connected to water from the northwest coast of Africa to create an inland sea. From there, a canal could be built into central Africa. This would open the region to European vessels from the north. The project would have been enormous and recent studies have indicated it would have been a failure. More of the Sahara is actually above sea level than Mackenzie realized. Item 88. £975 (US $1,278).