A Variety of Books and Ephemera from Whitmore Rare Books 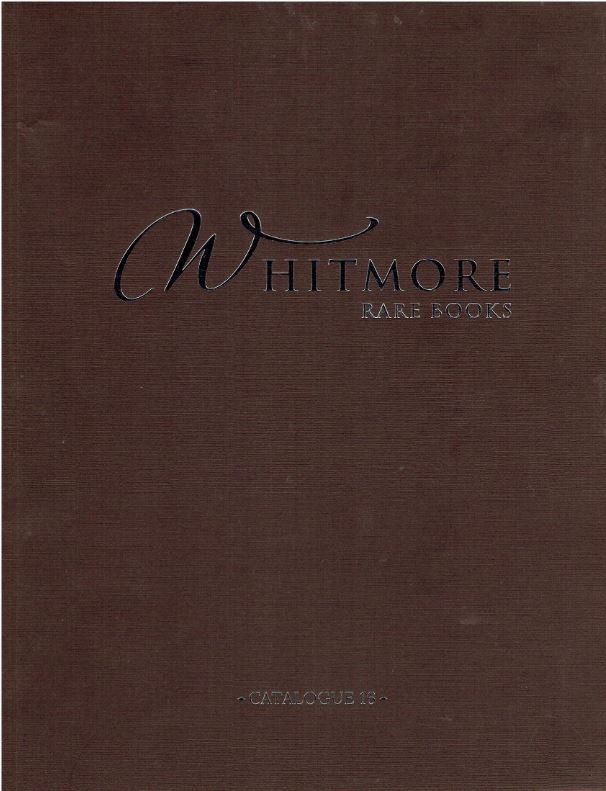 Whitmore Rare Books has published their Catalogue 16. It doesn't otherwise have a name or a description, so we can only say there is a variety of material. There are a couple of books over five centuries old, much in the way of great literary works, all sorts of nonfiction, and a few ephemeral items. With that, we will turn to describing a few of the specific items we found in this catalogue.

We begin with a very old story, though not quite so old a book. Item 43 is The Noble and Joyous Book Entytled Le Morte d'Arthur. This tale was originally printed at the Caxton Press in 1485, but this is the Ashendene Press edition of 1913. Ashendene was one of the early fine private presses, started only a few years after William Morris' Kelmscott Press. It was operated by Charles St. John Hornby for 40 years, from 1895-1935, during which time he published 40 books. His average output per year is easy to calculate. This edition contains 29 exceptional woodcuts. The book was written/compiled/translated in the 15th century by Sir Thomas Mallory. It was based on the legends of King Arthur and the Knights of the Round Table. It is a subject of debate whether King Arthur actually existed, but if so, he dates to the late fifth, early sixth century. There are no contemporary accounts of him and his knights, so by the time writings about him appear, it is unclear how much if any is based on actual historical events. However, with Mallory's book, Arthur, Lancelot, and all became popular figures in England, real or imagined. The book's title, which translates to the death of Arthur, is odd since it is mostly a tale of his life. The title was actually that of the book's last chapter, which the printer believed was intended as the title for the entire book. Priced at $12,500.

Item 3 is the first octavo edition of America's most notable work of natural history, John James Audubon's The Birds of America. He originally printed the book as an elephant folio, a spectacular presentation few people could afford even then. Audubon decided he needed to print it in a smaller format so that the price could be made more reasonable. Thus came the octavo edition, seven volumes published 1840-1844. His drawings, designed to show what the various species of American birds looked like, is today recognized as a great work of art. Audubon depicted his birds in natural poses, rather than looking like stiff, stuffed animals. The folio first edition is out of reach now for all but the most wealthy of investors. Whitmore reports that five of the ten highest prices ever achieved at auction are for this book, with ones in top condition bringing in over $10 million. The octavo edition is not inexpensive, but not in the stratosphere. $60,000.

Next we have a novel set in New Orleans, a 1981 Pulitzer Prize winner that took almost two decades to be published. Item 60 is A Confederacy of Dunces by John Kennedy Toole, published in 1980 by the Louisiana State University Press. It is the tale of an eccentric, opinionated, not terribly likable character from New Orleans. Many consider it the best depiction of the city found in a novel. Toole wrote the book in the early 1960s but was unable to find a publisher willing to publish it. Depressed, Toole committed suicide in 1969. Years later, his mother discovered a copy of the manuscript and so pressured local writer Walker Percy to read it that he finally consented. He was so taken by the story that he was able to have it published, the book then finally being recognized. $2,000.

Amelia Earhart regularly appears in the news though she disappeared 80 years ago. Earhart was attempting the first round-the-world airplane flight piloted by a woman when her plane came down in the Pacific. She was never found, though pieces of possible wreckage are occasionally located, and not long ago, a Japanese photograph from a Pacific island was thought to possibly show her. Still, the exact details of what happened remain unknown. Almost a decade earlier, Earhart gained fame as the first woman to pilot a plane across the Atlantic. It followed closely on Lindbergh's famous flight, though unlike Lindbergh, she had a copilot. In 1928, she recounted her flight in 20 Hrs. 40 Min.: Our Flight in the Friendship. In it, Earhart covers her childhood memories, early interest in flying, and goes on to talk more about women and aviation. Item 21. $2,500.

Here is one of those ephemeral items. Two, actually. Item 55 is a fragment of six frames from the 1897 filming of the Corbett-Fitzsimmons Fight. Earlier fights had been filmed, but this was the first one presented as a full-length feature film. It ran over 100 minutes, and included not only the fight, but an introduction by former champion John L. Sullivan and the aftermath of the fight. The bout was held in Carson City, Nevada, boxing being illegal in most states at the time. James J. "Gentleman Jim" Corbett was the defending champion, having won the crown by defeating Sullivan in 1892. This would be his last day as champion, as Englishman Robert "Bob" Fitzsimmons knocked him out in the 22nd round. Corbett gamely tried to rise, but could not get up before the ten-count was called out. The film was a great success, but no complete copies survive. There is only a 19-minute segment available for viewing. This strip of film is accompanied by a promotional broadside for the film at the Fulton Opera House in Lancaster Pennsylvania on September 21, 1897. $9,750.