Polyglossia, a World of Many Languages, from Shapero Rare Books 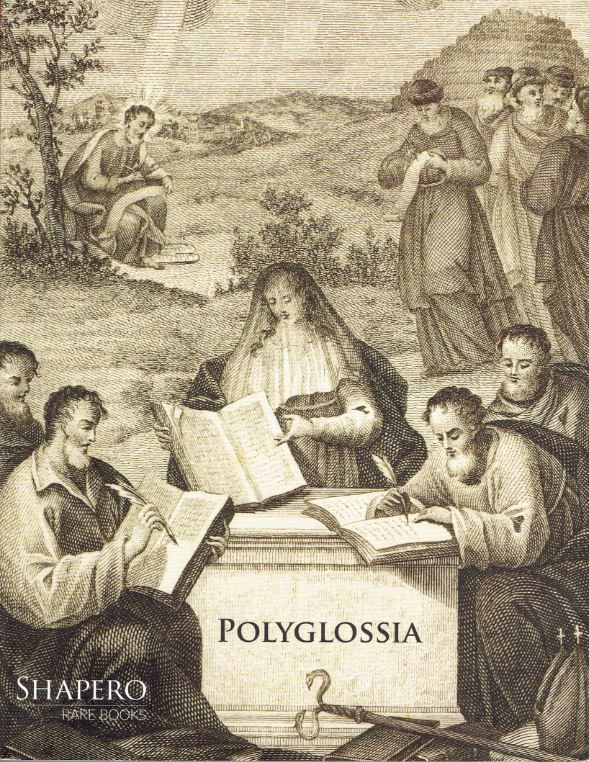 Shapero Rare Books has issued a catalogue entitled Polyglossia, subtitled Printing and the Meeting of Minds. For those readers for whom "polyglossia" is not a part of their everyday vocabulary, it refers to multiple languages being spoken in the same land. America is somewhat polyglassic in some regions where English and Spanish are spoken, others where the second language is French, and then there are Native American communities and those with numerous immigrants. However, Switzerland is a better example. There is no specific Swiss language, but four official ones, German, French, Italian, and Romansh (sort of a Roman Empire version of Latin). India uses two languages, Hindi and English, for official purposes, but officially recognizes 22 of them. It's a big country.

Another example is where different languages are used for different purposes. This was seen for centuries in Europe where Latin was used for learned writings, notably science and religion, sort of a common language, while people spoke their own local languages. Shapero divides their catalogue into six sections: Coptic, Latin and Greek Printing, Books & Manuscripts in European Languages, Hebraica & Judaica, Russian & Eastern European Interest, and Armenian. These are a few selections from this catalogue of many languages.

We will start by going back to the beginning of printing... almost. Item 2 is Rationale divinorum officiorum, by Guillelmus Durandus. It was only the fourth book ever printed, the third with a date, 1459. It is one of only three known copies still in private hands. Durandus was not around to witness the marvel of his printed book. He was a thirteenth century theologian who died in 1296. This book is a compilation of ancient liturgies including descriptions and interpretations. It was printed by Johannes Fust and Peter Schoeffer in Mainz, same place as Gutenberg's bible. That is not surprising since it was Gutenberg's press Fust and Schoeffer used. Fust was Gutenberg's financial backer, and when Gutenberg was unable to pay his debts, Fust was able to seize his press. Shoeffer was Gutenberg's most skilled assistant and Fust's son-in-law. Fust and Schoeffer remained in business together until Fust's death in 1466, after which the latter remained in business alone. Schoeffer continued until his death in 1503, and that business was continued by his descendants until the middle of the sixteenth century. Offered is one of only ten copies that were illuminated by Fust. This copy was once part of the magnificent collection of Estelle Doheny. Priced at £450,000 (British pounds or approximately $588,483 in U.S. dollars).

This next item is one Shapero describes as "one of the most remarkable books of the Renaissance. Sticking with Latin, the title is Imperatorum romanorum omnium orientalium et occidentalium verissimae imagines ex antiquis numismatis quam fidelissime delineatae. That roughly translates to "medallions of all the Roman emperors, both east and west, from the beginning of the empire, with images as true as possible." It was created by Jacobus Strata and published by Andreas Gessner of Zurich in 1559. This book contains 188 woodcut medallion images of every emperor from Caesar to Charles V, Emperor of the Holy Roman Empire, who died the year before this publication. The round, medallion images were logical since many images were taken from ancient coins. The aim of Strada's book was to show the continued line dating back to Roman days to establish the legitimacy of the current emperor. Item 16. £25,000 (US $32,695).

Item 29 is an Album Amicorum of Rhaban Giese, from the years 1618-1621. An album amicorum is sort of like a book of autographs, but with more than just signatures. In this case, it includes many illustrations and captions from Giese. Shapero describes this as, "the volume is enriched with amusing and sometimes bizarre illustrations loosely derived from Giese's travels." Not much is known about Giese. He appears to have been a doctor and well-educated man, a native of Danzig who studied in Geneva. He was fluent in French and German and likely Latin as well. During this period, he got around. His travels took him from Geneva to Lyon, Paris, and London. It was in London he obtained his most notable autograph, that of King James I. In addition, there is a motto that also appears to be in the King's hand. £60,000 (US $78,369).

Next up is La Tour de Trois Cents Metres, by Gustave Eiffel, published in 1900. The title translates to "the tower of three hundred meters," but we all better know that structure as the Eiffel Tower. Built for the 1889 Paris World's Fair, and considered a monstrosity worthy of quick destruction by many at the time, it has come to be the most notable symbol of Paris. This account by the tower's creator was published by Eiffel himself in a limited run of 500 copies. It was not sold to the public but given by Eiffel to various libraries, universities, and societies. It was published to coincide with the 1900 Paris Exposition. At that time, the Eiffel Tower was still the tallest structure in the world. Item 87. £15,000 (US $19,604).

Item 89 consists of an exchange between two of the twentieth century's greatest minds with the title Warum Krieg? (why war?). Good question, but not even Albert Einstein and Sigmund Freud could come up with a satisfying answer to a question that ought to be absurd to even ask. In 1932, Einstein was asked by the League of Nations to address a letter to anyone he chose about the possibility of avoiding war. Einstein chose Freud. Einstein focused on the importance of an independent judiciary to mediate the conflicts that led to war. While Freud concurred with Einstein's proposition, he had a darker view about the ability to avoid such conflicts. He says, "there is no likelihood of our being able to suppress humanity's aggressive tendencies." Freud felt war was the result of man's unwillingness to accept such social constraints. By the time this discussion was published in 1933, Hitler had taken control of Germany and the largest war in history had become all but inevitable. £2,500 (US $3,268).