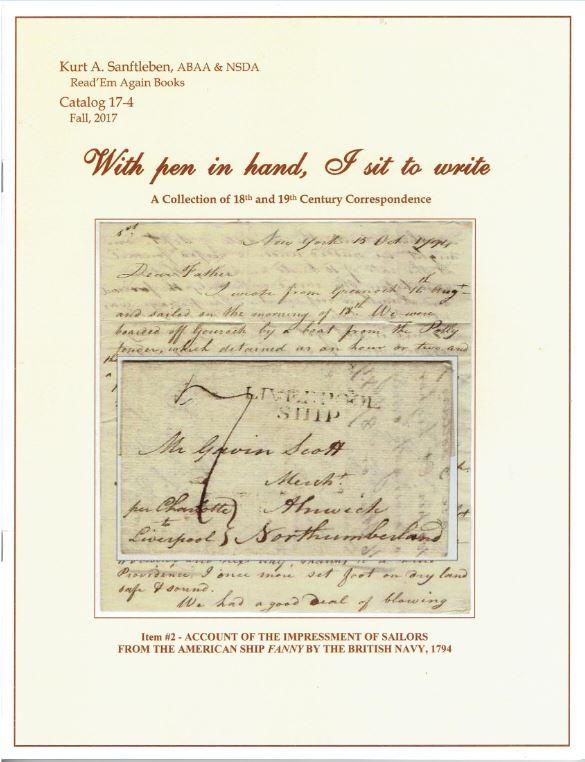 Read 'Em Again Books has issued a catalogue with a poetic title, With pen in hand, I sit to write. The subheading explains that title more clearly – A Collection of 18th and 19th Century Correspondence. While Read 'Em Again is a bookseller, this catalogue is devoted mainly to manuscript correspondence. While in the book business, they explain, "most of those who buy from us don't consider themselves to be book collectors even though they may often buy collectible books. Rather...they are thematic collectors – perhaps they collect topics related to their employment, a hobby, an institution, an interest, a region, a historical period, or even their family." It is an evolution in traditional collecting we see more and more today. Read 'Em Again Books is at the forefront of current trends.

There is one other point to note about many of these letters. They will also appeal to philatelic collectors. Those who engage in philately will know what that means. For others, it is stamp collecting. Most of these letters come with their original mailing envelopes and stamps. Due to their dates, that means these are early stamps. Undoubtedly, these stamps add to the value, but not knowing philately, I cannot say on each item whether it is a significant or a small part of the overall value. We will note that Read 'Em Again is not only a member of major book organizations, the ABAA and ILAB, but of the American Philatelic Society and the National Stamp Dealers Association. Now, here are a few selections from this collection.

We begin with a letter in a rare early advertising envelope for one of today's most famous American companies. It wasn't then. The corporate return address is for Asa G. Candler & Co., Wholesale Druggists in Atlanta Georgia. That name isn't familiar, but they had a proprietary product whose name you will recognize – Coca Cola. The back of the envelope proclaims, "The Brain Tonic and Intellectual Soda Fountain Beverage, Coca-Cola, Recommended by all who have used it." The "Coca-Cola" is in large type, in the familiar script still seen today. Inside, is a four-page letter from "Willie," dated October 5, 1889. Coca Cola was invented by John Pemberton in 1886, replete with its magic ingredient. He sold rights to his tonic to Asa Candler in May, 1889, and the rest is history. Willie writes his letter to "sis," which may be a nickname for his wife, that "Mr. Candler made me an offer of $50 for the month... What do you think of my taking this position?" Take it, Willie! Actually, he already did. The offer was not in the Coke department, but he was put in charge of retail and prescriptions. As to whether Willie's career grew with Candler's success or he moved on we do not know. Item 54. Priced at $3,000.

Next we have a letter from Captain "Indian" Van Swearingen from his fort near Wellsburg, Virginia (now West Virginia) to his cousin Captain Josiah Swearingen. Van Swearingen fought in the Revolution, and later traded with and fought against Indians. His adventures on the frontier led him to be close friends with the famous, or infamous, younger Indian fighter Samuel Brady. Brady had several family members killed by Indians and devoted his life to exacting revenge. Brady was welcome in Swearingen's house, which led to his eloping with the older man's daughter, Drusilla. All would be forgiven. In 1791, Brady followed some marauding Indians across the border of Pennsylvania. While there, he killed four natives Delaware who were not involved. Brady was tried, but there was no way anyone was going to be convicted of killing Indians, innocent or not, on the frontier. He was acquitted. Van Swearingen's letter refers to these events at the time they were occurring. Writes Swearingen, "I am agoing to give you the late nuse...the Indens latly killd & took seven people 2 mils from my Fort & fore others in the woods... Brady & others 25 folowd or souted after the Savedges – returnd with 4 skilps & a grate quantity of plunder." He goes on to say, "we expect a bludy general Savedg War & Should expect you in the feald if you was as capabl as you was when you was back by Rascall & Macintosh..." Swearingen composed this letter before the invention of spell check. Item 1. $4,500.

Going off to school was a bit more of a challenge back in 1849. This young lady was traveling from her home in Deerfield, New Hampshire, to the Ontario Female Seminary in Canandaigua, New York. It's 400 miles away, and according to Google Maps, takes about 6 ½ hours to reach. It took Abby Wells eight days. She left on a Friday, probably December 30, 1848, accompanied by her brother, David, for the first part of the journey. They had to go by stage to Albany, at which point she could pick up a train the rest of the way. She left Milford Friday morning but did not make it to Boxborough until 10:30 at night. Heavy snow fell and the men had to get out of the stage and help clear the way. They spent several days trapped, and once they began moving again, were only able to travel 15 miles in a day. They finally reached Albany Thursday night. David then returned home, and we don't know how long that took, while Abby took the train west Friday morning. The train finally arrived in Canandaigua Saturday morning, 24 hours later. Abby was undaunted. She writes her parents on January 10, "I should not be afraid to return alone if necessary. I did not suffer scarcely any with the cold excepting my feet..." As a postscript, Read 'Em Again tells us Abby later returned to Deerfield, taught in the local school until about the age of 60, did not marry, and died in 1887. The envelope was mailed with a black 10 cent Washington stamp. Item 23. $1,750.

When your husband is wounded on a Civil War battlefield hundreds of miles away, it isn't easy to be cheered up, but E. T. Lamerburton made a great effort to amuse his buddy's wife in this December 5, 1862 letter. Lamerburton is handling the correspondence evidently because Augusta's husband was not up to writing. The letter was written from "Camp Vermont" in Virginia to the following address: "This letter is for Augusta Wife of H.W.C.. the Vt. soldier who was shot on Picket near the Po-to-mac Daughter of Capt. King. In keeping of the Doctor. Snow's Store, Vermont." Augusta's husband's friend humorously writes, "You don't seem to answer my letters very well...if you can't do better, jist copy off a verse or two of scripture – or anything else." He then adds, reassuringly, "Your man is doing splendidly. The Surgeon dressed the wound day before yesterday, and said it looked much better than he thought it would." Continuing in a positive vein, he adds, "Our huts are as warm and dry as need be, and we five fellows are having an uproarious time - that is we are happy and jolly." One suspects he is exaggerating to comfort her. While Augusta must not have been much at writing, Lamerburton acknowledges that the cigars and cheese she sent arrived, adding, "...as far as I am concerned, if the girls were only here, soldiering wouldn't be at all hard to take." Item 37. $300.

J. N. Embres had concerns other than the mere risk of the loss of a spouse during the Civil War. He was worried about the loss of slaves. Embres wrote to Josiah Nichols in Washington, Arkansas, on January 25, 1864. He writes of "...2 Negro Boys that were stolen from Maj. John Easton & a girl from Mrs. Williams." He continues, "The thieves are about here & I have no doubt the negroes will all be lost." He says "the girl is gone now," but the "Boys of Easton are on this side of the River & placed with some woman who is instructed to keep them as her own..." To put this in context, these were not cases of people stealing slaves for their labor. There was evidently an active underground railroad even in Confederate Arkansas at the time. The "River" Embres refers to is the Ouachita, and the fear of the slaves crossing that river was because Union troops controlled the other side. Item 44. $1,500.