53rd Anniversary Catalogue from The Pages of Yesteryear 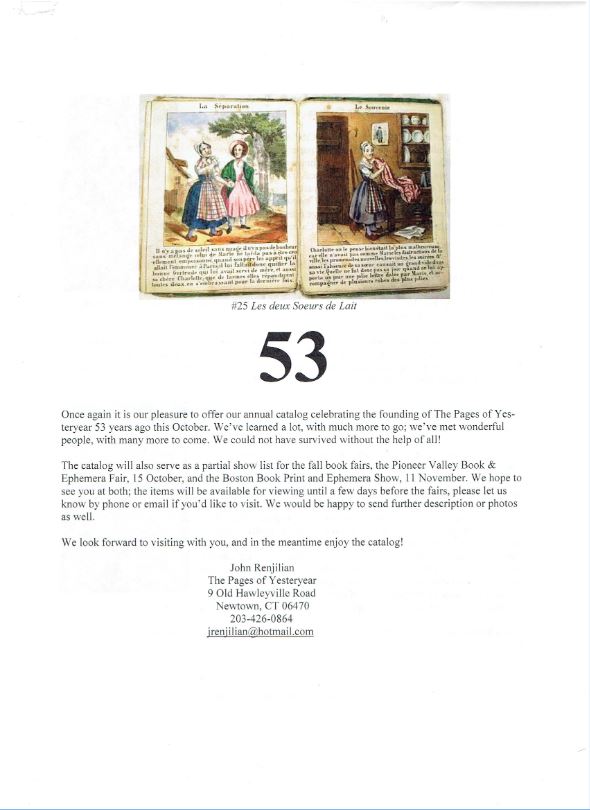 The Pages of Yesteryear has issued their annual anniversary catalogue. The title, and number of items therein, increases by one each year. This one is simply titled 53, which corresponds to the number of years owner John Renjilian has been in the book business. Offered is a mix of uncommon books and one-of-a-kind ephemeral items, particularly manuscripts. These mostly come from regular people, ones who like the vast majority of us will never find their names in history books. However, their words reflect the lives of most people during their times, perhaps more interesting than reading about the lives of people whom we admire, but to whom we really can't relate. There are several diaries, and a few make me a bit reluctant to publicize their names as they only died a short time ago. Many people who knew them are living and might recognize their names. Here are a few selections from the 53.

We begin with a World War II diary from a serviceman on the U.S.S. Santee in the Pacific. It carried 600 marines and 82 planes. Action gets heavy late in the war, the ship attacked by kamikaze pilots. "About 60 casualties caused by suicide plane, including 20 dead... Proper naval burials were held for the dead..." In April 1945, "Been having troubles with aircraft lately. Too many crackups... Lost fighter squadron leader. Last seen going down in flames... Kamakazi attacks almost every day." On April 14, "Received word about President's death." On May 7, "Received word of 'Unconditional Surrender of Germany.' Just another day for us." By July, they finally get a few days leave on Guam, and on August 15, "'Japs Quit' was headline in ships paper. Received word that war was over. Out came the ships beer. Each man was given two bottles to celebrate." However, there was still one more incident, as the Santee got caught in the tail of a typhoon. "One officer was washed overboard." Item 53. Priced at $300.

Next we have a diary from only a few years later, but a totally different world. It is a 13-year-old girl's diary from 1953, and she has discovered boys in a very big way. We will identify her only as Miss Grey as she likely died recently. On January 1, at a party, the young lady is already playing spin the bottle. She dances with Timmy, who's a good dancer, "but holds you too close." By the next day, she laments John Carpenter wasn't in school, and a day later, he actually spoke to her. "Oh boy." By the end of the month, "...he almost danced with me. 'Almost.'" The relationship did not last. On February 14, "Peter Conely sent me a Valentine. I like him so, the valentine means so much to me." Not that much. On March 20, she writes, "My Darling Jerry I love you." Next is a separate book which picks up in September 1954, where she writes 20 pages about Spence, who evidently has little interest in her. By February 1955, she has given up on Spence, but reunited with Ricky, an old boyfriend. "He took me in his arms and tried to kiss me, but I wouldn't let him. Oh! How I wanted him to." Apparently, she thought he was going steady with Beverly, but when she found out otherwise, "I let him kiss me. Oh it was wonderful. I could hardly breathe but I loved every moment of it." Ironically, the cataloguer notes, Miss Grey never married. The lot includes her passport. Item 18. $200.

So what were 13-year-old boys interested in at the time? Girls? No. As we see from James Swift's 1953 diary, it was cars. In his diary he writes, "My main interest is cars and know much of the History of all cars ever made. If I pass I plan to go to trade School where I'll learn a lot about motors." James also liked fishing, swimming, delivering newspapers, and playing, but practically every day has something about cars. He builds models, buys and reads car books, goes to dealerships and collects brochures, builds his own "hot rod" (probably a soap box car). He takes parts off of wrecked cars. Collecting brochures, "we went down to the Kaiser place but the man told us to get out (the bastard)." We all know what happened to Kaiser, probably because of customer service such as this. He even gets to drive his uncle's car, "though I didn't do too good." He also writes about coming to school late and getting an extra assignment. "This got me mad and I refuse to do it." He ends up with more punishment work. "I'm going to punch those teachers in the mouth." Presumably, he didn't, as a few weeks later "I passed! I'm in 8th grade." Item 19. $175.

This book represents an important meeting between East and West in terms of medical practice. The title is Quan Ti Xin Lun (Manual of Eastern Anatomy and Physiology or A New Theory of the Body). The author was Benjamin Hobson, a medical missionary originally sent to Macao in 1839. In 1843, he was transferred to a hospital in Hong Kong, where he found his assistants well-versed in Chinese medicine but knowing little about western practices. That led to his decision to publish a book in Chinese that would introduce western medicine to China and later Japan. This book covers all aspects of human anatomy as well as comparative anatomy. It contains 43 full pages of illustrations, which, to be honest, Hobson cribbed from other authors. The cause was good. The book was first published in 1851, though Pages of Yesteryear believes this to be an 1853 or 1857 reprint, likely printed in Shanghai. Item 32. $2,000.

Next we have a sketch book from a noted illustrator and writer of children's books from the mid-20th century, Hildegard Woodward. Ms. Woodward illustrated both her own works and those of others, and a few adult books as well. She twice received the Caldecott Honor for her illustrations, in 1948 and 1950 for books written by others. The sketch book has Ms. Woodward's name and address written on the first leaf and contains 47 pencil sketches and one finished drawing. They are primarily landscapes from the American West, probably made on a trip. Three are labeled as King City CA, Montello UT (Monticello Utah? Montello Nevada?), and the Painted Desert. The finished drawing shows a man leaning on a postal letter box. Item 52. $750.

Here is a collection of letters to Santa Claus, and for those not in the know, his workshop is actually located in Newark, New Jersey. That is where these letters were sent, anyway. It was part of a promotion in 1926 by an early radio station, WNJ in Newark. It was formed in 1923 in the home of Herman Lubinsky, a naval radio operator who was operating the wireless on board the Carpathia when the first distress signals came in from the Titanic. By 1926, he had moved his radio station from his house to the Paradise Ballroom. Children were promised "souvenirs" if they wrote Santa at the station. Item 26 includes 20 of these letters from children for Christmas 1926. Most were written by parents on their behalf, though a few were by children themselves. In one case, a parental postscript asks Santa to tell the child "to study his lessons better in School," another "not to say bad words." In 1932, the Federal Radio Commission denied to renew WNJ's license and the station ceased to operate. $200.