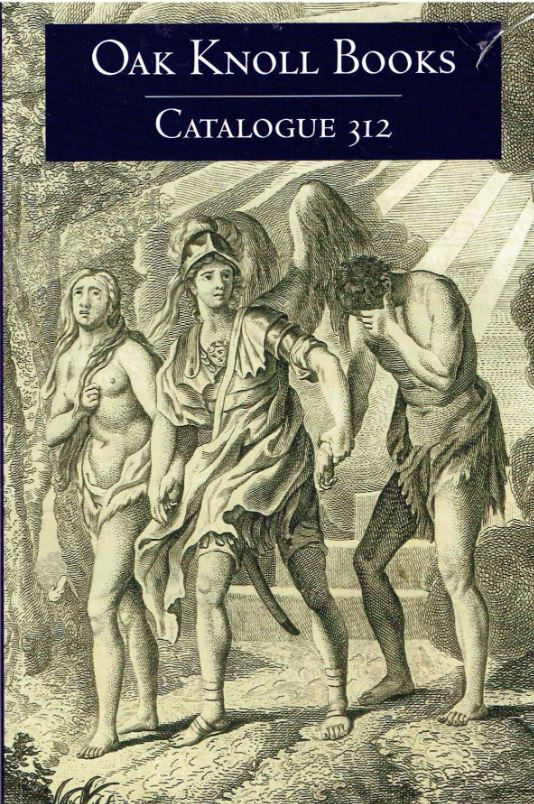 A year of acquisitions.

Oak Knoll Books has issued their Catalogue 212 One Year of Acquisitions. Oak Knoll is the "books about books" and related material specialist. You will not find a greater selection in this category than here. This catalogue has been divided into subheadings for more precise targeting. They are: Featured Books, Bookbinding, Books-about-Books, Limited Editions Club, Private and Fine Press, Printing History, and Miscellaneous. There are 300 items in all, plus a few new titles in the field from the Oak Knoll Press. These are a few of the selections.

Despite all of the items from which we can select, we will begin with the first two. There is a reason. These two aren't a book or two but large collections. The first one in particular is amazing, likely a once-in-a-lifetime opportunity to obtain an important collection already built. Item 1 is a long run of titles from the Limited Editions Club. The Limited Editions Club was founded by George Macy in 1929. His plan was to produce fine press collectible editions of classic books illustrated by the greatest artists and illustrators of the day. Many of them were signed by the illustrators, occasionally by the author where it was someone who was still living. Macy's print runs were 1,500 copies, the price $10, a lot of money in Depression times. George Macy died in 1956, but the company continued under the management of his wife, Helen, and family until sold in 1970. After a few brief corporate owners, it was sold to Cardavon, a company controlled by Gordon Carroll. Carroll died in 1978, and the company them went to Sidney Shiff, who operated it until his death in 2010, though the type of publications evolved under his leadership. Since then, the Club has essentially been inactive. This collection consists of 558 titles, including all of those published by the Macys and Cardavon. It includes a partial run of those produced by Shiff. Oak Knoll notes that other than a handful in good or better condition, the copies are all in near fine to fine condition, over half still in their glassine wrappers. Included are the two Alice in Wonderland books, signed by the real Alice herself, Aristophanes signed by Pablo Picasso, Ulysses signed by Henri Matisse (only), The Grapes of Wrath and Huckleberry Finn signed by Thomas Hart Benton, and Walden signed by Edward Steichen. The collection also includes the special publication series. Collection priced at $125,000.

The second collection is a complete set of Matrix in the deluxe bindings. Matrix is an annual book of articles concerning the private press, covering its history, illustration, printing, typography, engraving, and anything else pertaining to fine press work. Contributors included many of the greatest experts in book production, its reputation generally being that of the finest publication in its field. The collection includes all issues up to the present, from 1981-2016. All but the first two come in the original slipcases. The first two did not come in slip cases but are in specially made ones. The deluxe editions are specially bound and include many more specimens tipped in of illustrations, foldouts, broadsides, samples, and more than are in the regular trade edition. Volumes 1 and 2 are in the deluxe reprint editions as they were not originally published in such editions. Included is the deluxe index to volumes 1-21 and the offprint indices for volumes 1-5 and 1-10. Item 2. $25,250.

Here is a book from a notable press that is much older than the ones we have seen before. Item 148 is Divinarum Institutionum Libri Septem. The text is in Latin, as is the name of the author, Lucius Caecilius Firmianus Lactantius. There is no "me" in this author's name, but plenty of "us." Lactantius was a Christian author who lived in the third and fourth century. He was an advisor to the first Christian Roman emperor, Constantine. This work is designed to prove the truth of Christianity to pagan critics. Naturally, it wasn't printed in Lactantius' lifetime, nor within a millennium thereafter, but it did come fairly soon after printing was invented. This edition came from the Aldine Press, published in 1515. The Aldine Press was operated in Venice by Aldus Manutius, who went in the business to print classic works at affordable prices. $3,500.

This one sent me to Google. It is a Limited Editions Club edition of Upton Sinclair's classic The Jungle. This one will make you want to grow your own food. It was issued in the usual 1,500 copies and is signed by illustrator Fletcher Martin, and, according to Oak Knoll, the author himself. It was published in 1965. Wait. Sinclair signed this copy? I know The Jungle was first published in 1906, and Sinclair could not have done that level of research in his adolescence. How was he still signing books in 1965? It turns out Oak Knoll has it right. Sinclair lived until 1968, age 90. Item 106. $400.

James Boswell did a lot of note taking, enough to fill 18 volumes many years later. Boswell wrote numerous books, including his best-known Life of Samuel Johnson, but he kept copious notes along the way. While they were mostly lost for a long time, they began to come to light in the early 20th century. Collector Ralph Heyward Isham bought them up and secured the publishing rights. He then began issuing this large collection in 1928, finishing in 1937. Item 73 is a set of the Private Papers of James Boswell from Malahide Castle, in the Collection of Lt.-Colonel Ralph Heyward Isham. Isham brought on W. E. Rudge to print the books and Bruce Rogers to design them. Unusual for a set, the books come in various sizes, based on the size of the facsimile documents. The set also comes with three other Boswell related books. The Isham collection was acquired by Yale University in 1949. $3,500.