The Languages of South Asia from John Randall 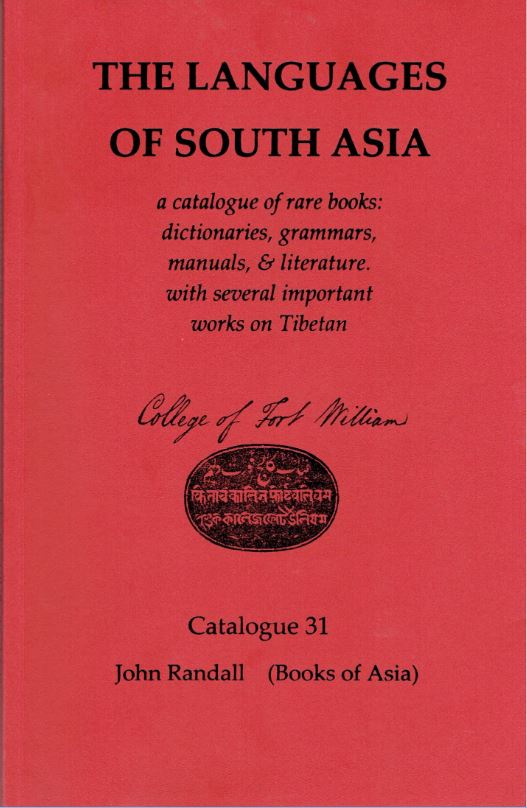 John Randall Books of Asia has issued a selection of The Languages of South Asia, a catalogue of books: dictionaries, grammars, manuals, & literature, with several important works on Tibet. The average reader may think there are a couple, maybe a handful of languages in this area centered in India. Not so. Randall notes that according to the 2001 Census of India, 1,721 languages and dialects are spoken in India alone, 20 with more than 1 million speakers, another 31 with at least 100,000. Now we know where the Tower of Babel was located. Randall's catalogue has books covering a mere 34 of these and yet I will admit that I have never heard of many of them. In case you are wondering whether there are any of a language of most interest to you, here they are: Sanskrit, Hindi, Kashmiri, Nepali, Pahari, Pashto, Persian, Panjabi, Saraiki, Urdu, Tibetan, Andamanese, Assamese, Bengali, Bihari, Dafla, Khondi, Kului, Lephcha, Maithili, Mikir, Oriya, Brahui, Gujarati, Marathi, Sindhi, Dakhui, Kannada, Malayalam, Tamil, Telugu, Tulu, Sinhalese, and Divehi. If you have heard of more than half of these, you are doing better than I. This catalogue is a linguist's dream. Here are a few selections.

We begin with a dictionary of the government language of India and the most widely used – Hindi. Indeed, Hindi is one of the most widely spoken languages in the world. Here we need to make a few comments in general. Many of these dictionaries are designed to translate Asian languages to English rather than define meaning. Naturally, they would have primarily been prepared during British colonial times. However, they were not most often prepared by government officials, scholars, or linguists. It was the missionaries. They came to Asia to convert the native population, but first they had to know how to communicate with their would-be converts. That was a challenge considering all the different languages, but the missionaries were undaunted, creating dictionaries and grammars of many of the more commonly spoken Asian languages. Item 29 is A Dictionary of the Hindee Language, by John Drew Bate, published in 1875. Bate served as a Baptist missionary in India from 1865-1897. His dictionary was quite an accomplishment, consisting of 50,000 words, double that of the previous standard dictionary. Bate also revised the Old and New Testaments in Hindi, along with writing an anti-Islamic poem, but this was his most notable work. Priced at £125 (British pounds, or approximately $165 U.S. dollars).

Next we have the first Urdu dictionary, which requires some explanation as author John Borthwick Gilchrist calls it "Hindoostanee." Urdu and Hindi are variants of Hindustani, languages that are close. Speakers of these language can readily communicate with each other. Urdu is the official language of Pakistan, used primarily by Muslims, the Hindi variant covering a wider swath of India with Hindu populations. However, Urdu is also the primary tongue of several Indian provinces. The recognition of differences between the two may have more to do with the rivalries between faiths and countries than with the languages themselves. Gilchrist's Urdu dictionary is entitled A dictionary, English and Hindoostanee, in which words are marked with their distinguishing initials: as Hinduwee, Arabic and Persian. Whence, the Hindoostanee, or what is vulgarly, but improperly, called the Moor language, is evidently formed. Some more explanation is required here. Hindustani evolved from Arabic and Persian, brought from the West, primarily by Muslims, with a preexisting Indian language of Hindus, which Gilchrist thought was Hinduwee. Hinduwee is similar to Sanskrit, but the use of Sanskrit by upper classes led Gilchrist to contend that it was more of an invented language, a class attribute, while Hinduwee must be the spoken language of the masses. Gilchrist came to India as an assistant surgeon for the East India Company in 1782. He was keenly interested in local languages and their history, publishing this dictionary from 1787-1790. He became the first professor of Hindustani at the College of Fort William in 1800, but later returned to England due to ill health, where he became the first professor of Hindustani at University College, London. Item 59. £3,500 (US $4,605).

Here is a book whose subject matter you are not likely to find too many titles covering – Selected agricultural proverbs of the Panjab. Panjab, more often known as "Punjab," is a region in India, home of the Punjabis who speak the Punjabi language. This book contains 1,089 proverbs dealing with agriculture, which seems like a lot of proverbs about anything, but perhaps they are more common in Punjab. Actually, many of these look to be focused on the financial aspects of farming. Among them are, "Starving is a friend, borrowing an enemy," "Rain may stop, but the interest on a debt will not," "Crow, moneylender, and a dog are never to be trusted though asleep," "Who has low land, and high relations, he never will suffer loss," "Laziness and sleep destroy a farmer, as coughing betrays a thief," and "Manure does the work, or God does." I'm a bit confused on the meaning of the last. Author James Robert Maconachie believed proverbs would help reveal the psyche of the local population. Item 53, published in 1890. £650 (US $855).

This one is a first, the first book printed in Malayalam. Malayalam is spoken mostly in the Indian state of Kerala, on the southwest coast. In case you think few people speak Malayalam, there are 38 million speakers. Even relatively small languages can have big numbers in a country with a population of over 1.3 billion. The book has its title in both Latin and Malayalam. Here is the Latin version: Compendiosa legis explanatio omnibus Christianis. Even if you don't understand Latin you can surmise this is a religious work. It is a catechism, and rather than being printed somewhere in Kerala, it was printed in Rome. It was published in 1772. Item 163. £950 (US $1,250).

Here is one of those difficulties that missionaries faced that you probably never considered, and surprisingly, it led to some serious controversy. The title is, The proper names in the Old and New Testament, rendered into Urdu and Hindi. It was prepared by John A. Shurman, for the Allahabad, North India Bible Society, and printed in 1850 by the Presbyterian Mission Press. Not all that surprisingly, it was something of a challenge to translate all of those names from Biblical antiquity into the various Indian languages. However, the controversy over the names was not the usual Hindu-Muslim split. In this case it was a division within Protestant Christianity. Evidently, the Baptists were not pleased with the Presbyterians' names. Ultimately, the Agra Bible Society that commissioned the work suggested only that it be used as a guide, not a definitive statement. Item 204. £450 (US $592).