Books from the Old West from Old West Books 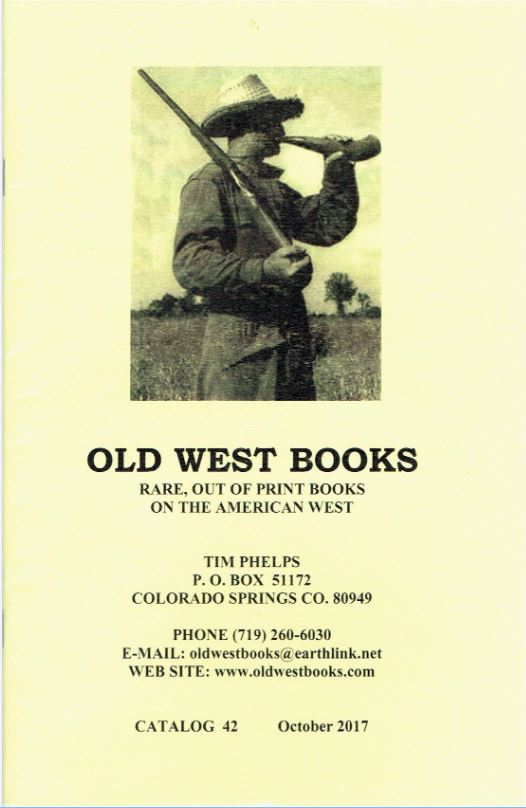 Old West Books recently published its Catalog 42 of Rare, Out of Print Books on the American West. Actually, you need only the dealer's three-word name to understand what is in this collection. What we can add is that Old West does not focus on just the more common titles in the field. This is a catalogue for Old West aficionados. Along with regularly published books you will find some that were privately printed in small numbers, tales of those who experienced the West when it was old, in books prepared strictly for family and friends. Often, these are people who personally experienced some of the hardships of the West, such as travels along the Oregon Trail, or individuals who met or knew some of the famous western outlaws and other characters whose names we all know. You won't know these books unless you follow the field closely, but they are highly collectible, along with having fascinating stories to tell. Here, now, are a few selections from this catalogue.

We begin with a biography of a man who is not well-known, but perhaps somewhat through his own fault. Unlike many western characters, Charley Reynolds was not a braggart. His quiet demeanor led to the nickname "Lonesome" Charley Reynolds, and those who asked him to recount his exploits would hear Charley tell them he really didn't have anything worth mentioning. Charley was a surprisingly well-educated man, one who went to college when few did. He headed west from his home in Missouri during the Civil War to avoid family problems, he being a loyal Union man in a Confederate sympathizing family. He hooked up with a Kansas infantry, and after the war, headed off into the back country to hunt, trap, and serve as a guide. He found himself at Fort Lincoln in 1873 where he met George Armstrong Custer. In hindsight, it was the worst thing that ever happened to him. The two hit it off and Reynolds served under Custer in the years forward. Reynolds had gained a reputation as the best guide in the territory. He served with Custer during the Black Hills campaign and was the one Custer trusted to make the 150-mile journey back to Fort Laramie to report the discovery of gold. Of course, Reynolds would serve with Custer at Little Big Horn. The night before the battle, he became despondent, had a premonition he would not survive, and gave his personal items away. He told Custer that the Indian village he had spotted was the largest he had ever seen, but Custer was undeterred. Reynolds was not with Custer for the unhappy finale, but was serving with Major Reno. Unfortunately, he suffered the same fate as Custer did that day. Item 68 is Charley Reynolds Soldier, Hunter, Scout and Guide, by John Remsburg, published in 1931. Priced at $375.

Here is a man who had no problems with self-promotion and exaggeration. Buffalo Bill turned his skills as a guide and buffalo hunter into becoming one of the greatest showmen the world has ever seen. He created his famous Wild West show, which toured first eastern America and later Europe. It purported to display life in the Wild West. It was an exaggerated caricaturization of the West, but audiences loved it. It is much responsible for images we have of the Old West today. Item 38 is Four Years in Europe with Buffalo Bill, by Charles Eldridge Griffin, published in 1908. It recounts Buffalo Bill's European tour from 1903-1906. While his name is not familiar, Griffin was something of a character himself. He worked in circuses and side shows doing all sorts of magic acts – ventriloquist, sword swallower, fire-eater, hypnotist, contortionist and such, along with non-sideshow positions such as newspaper owner, publisher, and author. His wife was a snake charmer. He was hired in 1902 to perform in Bill's shows, but by 1904, he had become manager of the European tour. $325.

As long as we are describing people with large egos, how about Charles King Polk Wells? His story is told in Life and Adventures of Polk Wells, The Notorious Outlaw Whose Acts of Fearlessness and Chivalry Kept the Frontier Trails Afire with Excitement, and whose Robberies and other Depredations in the Platte Purchase and Elsewhere, have been a Most Frequent Discussion to this Day... If someone else had written this book and title, as was the case with Reynolds, it would not sound so egotistical, but this book was written by Polk Wells himself. As the Preface says, "The expressions of but a single man may change a whole epoch of history." That is true, but Polk was not such a man. Nor is he a topic of frequent discussion today, though perhaps he was in 1907, when this book was published, or at least before he died in 1893. After the Civil War, Polk became an Indian fighter on the frontier. Twice he was captured by them, twice he escaped. He was friendly with some of the characters whose names you do remember – Kit Carson and Wild Bill Hickok. In 1872, he married, but went off to the wilds again. When he returned, he found his wife living with another man. Polk was understanding, even gave him some money. She would marry the man after her husband died. He must have appreciated Polk's generosity as he was the one who published his self-aggrandizing work. Unfortunately, by 1879, Polk Wells had turned to a life of crime. He robbed trains and banks and got away with it for a while, but not forever. He was sent to prison, attempted an escape, but killed a guard. That just assured he would never be freed. His book, in which Wells describes himself as something or a Robin Hood type, was viewed by contemporaries as self-serving, likely an attempt to secure a pardon which never came. Item 89. $125.

John Beeson was one of those people ahead of his time. Born in England, he emigrated to upstate New York, then Illinois, and finally, in 1853, he and his wife walked to Oregon. Beeson was an abolitionist, his farm serving as a stop on the Underground Railroad. When he got to Oregon, he took up the cause of another maltreated people, America's natives. His advocacy angered other Oregon settlers, so much so that he was forced to go to California for his safety. His wife and child stayed behind, and it didn't make for the best family relations when he sailed east in 1856. However, Beeson had a cause, and Easterners were far more sympathetic to the plight of the Indians than were the Oregon settlers who were fighting them. For several years, he traveled around the East lecturing on how the Indians were mistreated. He even met with President Lincoln, whom he knew from their Illinois days. In 1857, he issued this account, A Plea for the Indians; with Facts and Features of the Late War in Oregon. Item 9 is a copy of the third edition, published in 1858. $375.

Next up is The History of Kansas City... by W. H. Miller. This would not be a complete history today. Kansas City was not yet 50 years old when this book was published in 1881. Still, a lot of history had already transpired. Old West Books notes, it contains "Information on early expeditions, fur companies, the Santa Fe trade, Indian trade and removal, founding of Kansas City, the railroads, the Civil War, slavery, bush-whackers and Red Legs, Quantrell, etc." Kansas City was obviously a very different place in the 19th century. Item 59. $1,200.