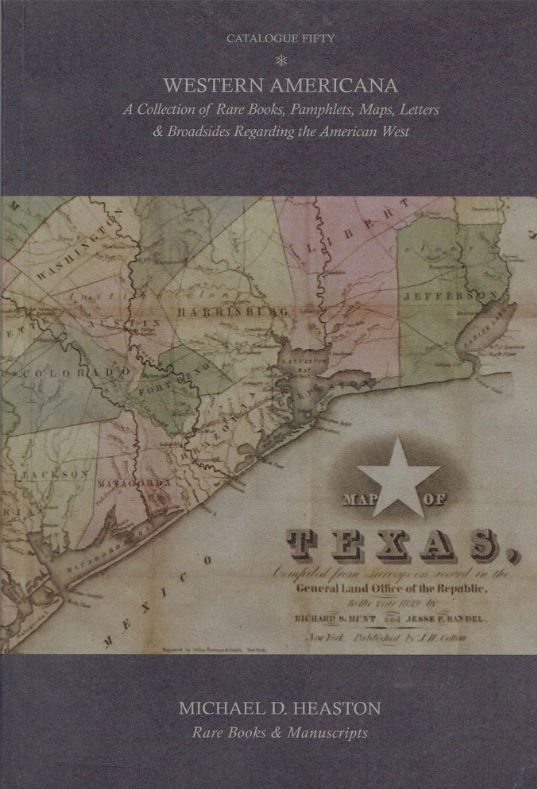 Michael D. Heaston Rare Books & Manuscripts has published their Catalogue 50. Western Americana, A Collection of Rare Books, Pamphlets, Maps, Letters & Broadsides Regarding the American West. It is easier to describe a catalogue when the title does that for you. We will note that there is much in the way of those ephemeral categories listed, including many maps, often from railroads and others hawking land. Collectors of Texiana will be well rewarded, but anyplace west of the Mississippi is fare game for this catalogue. The time frame is what you would expect for material about the taming of the West - 19th and early 20th century. These are a few of the items you will find.

Where better to publish the first account of a major historic site in the American West than Stockholm, Sweden? There is an explanation. The ruins of Mesa Verde are the most complete of those of the ancient American Western Indians, those whose civilization predates the earliest European explorations by the Spanish. Such communities existed all over the Southwest for centuries, but none left quite the impressive remnants as the cliff structures of Mesa Verde. They were discovered by a couple of ranchers in 1888, but no one paid them much attention until Swedish scholar Gustav Nordenskiold paid them a visit. He was fascinated by the story and came to Colorado to conduct some archaeological excavations. Such is the explanation for why this 1893 first edition of his account, The Cliff Dwellers of Mesa Verde... was published in Stockholm. Both English and Swedish editions were published, this being the preferred English as it contains many more photographs. No one has ever been quite certain what happened to these ancient Indians, but by the year 1300, all in the area were gone. The most likely explanation is that a long-running drought forced them to move South, where they mingled with other tribes. Item 30. Priced at $3,000.

Here is a remarkable story concerning Texas' greatest leader and a young slave who lived to be 100. Sam Houston was a slave owner, but extraordinarily generous for one. Slaves were treated virtually as family in the Houston household. In 1853, he chanced on an auction of a 13-year-old slave in Huntsville, his brutal owner forced to sell him to pay whiskey debts. The boy was crying when Houston took pity and purchased him. Houston took the boy home to play with his own children, and as he grew to a young man, Jeff Hamilton would become his driver, bodyguard, and when Houston was elected Governor, his office boy. Houston, despite being Texas' great hero of independence and first President of the Republic, was thrown out of office as Governor in 1861. The reason was his refusal to swear allegiance to the Confederacy, Texas having seceded. When Lincoln issued the Emancipation Proclamation, though it had no force in Texas, Houston freed his slaves. They stayed on as free workers, loyal to the Houston family. Hamilton remained with Houston and was with him when he died a year later, then remained with his widow who died in 1867, and with the family for many years later. Hamilton would become a sought-out man late in life, a living connection to Houston and other celebrities he met while serving the Governor. Item 68 is My Master. The Inside Story of Sam Houston and His Times... by Jeff Hamilton as told to Lenoir Hunt. It was published in 1940. Hamilton died the following year, just short of his 101st birthday, still intensely loyal to Houston and his family. This copy is from a signed, limited edition. $500.

Not everyone loved Texas as much as Sam Houston. Take Charles Hooten, for example. Hooten was an Englishman with a very low opinion of Texas, which at least makes for some entertaining reading. His book is St. Louis' Isle, or Texiana... published in 1847. St. Louis Isle is a French version of the old Spanish name for Galveston. Hooten's aim was to warn his fellow Englishmen from the "insane project" of moving to this place, "...amidst lurking savages reckless and unprincipled outcasts of civilization and fell diseases..." Of course, Texas is nothing like that today. Of course not. Item 72. $3,500.

There have been three declarations of independence in America. There is the best known one from 1776, the Texas Declaration of Independence, and this one – En el Puerto de Monterey de la Alta California... This is the California Declaration of Independence. Unlike that in Texas, where American settlers wished to secede from Mexico, this one represented a power struggle between local and Mexico City officials. Local officials led by Juan Alvarado declared their independence through this November 3, 1836, proclamation. Alvarado proclaimed himself Governor, Catholicism the only religion legal to practice in public (others could be observed privately) and various odds and ends. It was not so much a genuine attempt to achieve independence, as were the other two, but a way to pressure the central government into granting them autonomy. In turn, that government appointed Alvarado as California Governor, though he would be embroiled in various controversies in the years ahead, and Anglo settlers would revolt a decade later with Mexico engaged in war with the United States. Item 17. $65,000.

Item 1 is an 1895 Birdseye View of Abilene: The Future Capital of Kansas. I can't say that whoever wrote this land promotional advertising was wrong. It's been 122 years and Abilene still is not the capital of Kansas, but one can never say for certain it won't someday be. For now, with Abilene holding a population under 7,000, I think Wichita is safe. Now, if the writer had said home of a future U. S. President, he would have been right. At the time this item was published, five-year-old Dwight Eisenhower was getting ready to enter the Abilene elementary school. The brochure was published by J. D. MacMaster Real Estate Company, and they were preaching the prosperity of the community, the profitability of the farmland, and the easy access to railroads. Abilene was a major stockyard in the late 1860s, early 1870s, the end of the Chisholm Trail where Texas cattlemen drove their herds for rail transport to Chicago. However, by 1895, railroad connections could be made from Texas, ending the need for the long drive to Abilene. $2,500.

The broadside screams out, The Famine In Kansas! Dated December 6, 1860, it calls on residents of Marshall (Michigan) to attend a meeting on December 8 "for the purpose of organizing a society to solicit, receive and forward supplies to the starving ones in Kansas." One J. J. Lyon, agent for the Kansas Aid Association, would be there to describe the "deplorable destitution" of the people of Kansas. I was unaware of a famine in 1860 Kansas and looked it up. There was one. According to the New York Times, "an unparalleled drouth has destroyed all the crops, and now Winter and Famine stare the hapless pioneers in the face... For a hundred and fifty miles west of the Missouri every highway is crowded with wagons filled with men, women and children, fleeing as if Death were in the rear." This was evidently a terrible tragedy for the land that had just come through the nightmares of Bloody Kansas. Oddly, great wealth was starting to be accumulated in the Rocky Mountains of western Kansas (Colorado was part of Kansas at the time), but the rich soils of the east had seen hardly a drop of rain in a year. The reaction of countrymen from places far away to lend assistance, even as America was hurtling toward civil war, ought to teach us something of use for today. Item 87. $2,500.