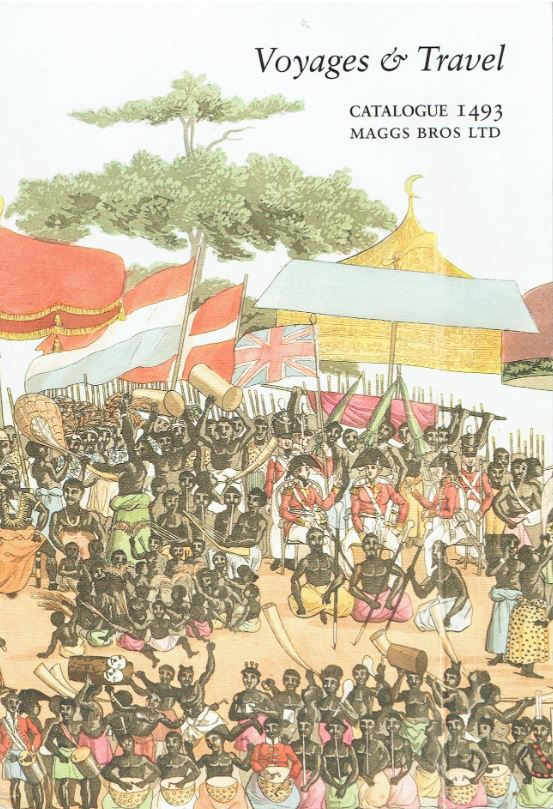 Maggs Bros. Ltd has issued a catalogue of Voyages & Travel, their Catalogue 1493. The starting point of most of these travels was Europe, but other continents are represented as well. The destinations were everywhere, so for convenience, Maggs has broken the selections down by arrival location. Those destinations are Africa; Egypt, the Near East & Middle East; Europe, Russia, Turkey; India, Central Asia & the Far East; Australia & the Pacific; Central & South America; North America; and Alaska & the Poles. That doesn't leave out anyplace that comes to mind. Not surprisingly, when they talk of "voyages" as opposed to, say, flights, you can expect the material to be of varying degrees of old. Here are a few selections.

We begin with a very rare and important book, and the most expensive item in the catalogue. It is David Samwell's A Narrative of the Death of Captain James Cook, to which are added some particulars, concerning his life and character. And observations respecting the introduction of the venereal disease into the Sandwich Islands. That seems an odd combination of topics. No, Cook was not killed by the Hawaiian islanders for giving them venereal disease. Samwell's interest in the illness comes from his being the surgeon on the Discovery. He was also an eyewitness to the death of England's most famous explorer, and felt that previous descriptions of his death were incomplete, allowing for misinterpretations of Cook's actions. Cook had had good relations with the islanders in the past, but there were some small thefts, and a more serious one led to the Captain's determination to recover the stolen property. He hoped to hold the village chief in custody until the property was returned. Unfortunately, misunderstandings led to a rapid deterioration of the situation, growing tension, building of crowds, and arming, which broke down in violence. Cook became the primary victim. Samwell's most detailed account of the incident was published in 1786. Item 75. Priced at £160,000 (British pounds, or about $216,253 in U.S. dollars).

This next group went off to war in Hawaii, though their fate was far less fearsome than that of Cook. They were American soldiers, off to fight in a world war, but this was not the one where so many lost their lives at Pearl Harbor. This was the First World War, and in that one, there wasn't much fighting in Hawaii. Item 65 is an album of photo postcards from the 4th Cavalry, and it looks more like a Hawaiian vacation than hand-to-hand combat. The 4th Cavalry went to Hawaii in 1913, four years before America even entered the war, and stayed their until its end in 1919. The concern was a few Pacific island outposts of Germany, in New Guinea and Samoa. The album contains 215 photographs, and they show such events as arrival by train (from the local train station, obviously, not the mainland), training, parading, field exercises, and off-duty recreation. They attended carnivals, with some soldiers performing as clowns and trick-riders. There are groups of both white and black soldiers shown. African-American soldiers man a parade cart labeled "King Booze," carrying whiskey bottles and waving jugs and bottles. There are also images of native Hawaiians and local sights. £3,500 (US $4,731).

Here is another story of the military on favorable duty. Item 21 is Journal of a Cruize in the U. S. Ship Delaware 74, in the Mediterranean, in the Years 1833 and 1834, Together with a Sketch of a Journey to Jerusalem, by (John) Israel & (Henry) Lundt. It was printed in Port Mahon (Minorca, a Spanish island in the Mediterranean) by The Widow Serra and Son in 1835. The U.S. was not involved in any major wars from 1833-34. Sailors sought Mediterranean duty in particular as it was an exciting place to be. This trip was significant as the Delaware was the first American naval ship to visit Beirut. There were 876 on board, including Commodore Daniel Patterson, his wife and daughters. One usually doesn't bring their wife and daughters to war. Besides which, Patterson had served his time fighting Barbary pirates and defending New Orleans at the time of the Battle of New Orleans in the War of 1812. It was estimated that 40,000 people visited the Delaware during her stay in Beirut. The journal also includes a description of the authors' side trip to Jerusalem. They were members of the crew, and explain that the book was intended for use of their shipmates, which explains the book's printing location, the typos throughout, and the fact that it was published mid-journey. It also explains the book being quite rare. £4,250 (US $5,714).

Commodore Patterson might have found this book useful while defending New Orleans. Item 95 is the Blue Book. The book may be blue, but it was a guide to the city's red light district - Storyville. It tells you where to find New Orleans' working women, the bordellos and prostitutes. For convenience, the ladies are broken down by race, white, black, and octoroon. Names and addresses are provided. The guide is interspersed with advertisements for bars, restaurants, and ladies, along with whiskey, cigars, and candy (to bring home to the children?). The guide was available in local shops for 25 cents, but Patterson would not have been able to avail himself of its useful information as it came along a century too late. It was published from 1909-1915, this one coming from no later than 1913. £2,750 (US $3,698).

Item 41 is a "Hurt Certificate" from England's great naval victory at Trafalgar in 1805. These were given to sailors who were injured in action. They could be for a lump sum or for a continuing annuity. This one was issued to Peter Marshall, an Ordinary Seaman. He served on board HMS Colossus, which sustained serious enemy fire during the battle. Marshall was hit in the leg with grape shot and received a compound fracture which left him lame. His award was for £6 per annum. Undoubtedly, Marshall would have preferred to receive what his certificate is worth today. £3,000 (US $4,052).

Item 97 is an American Civil War era broadside pertaining to journeys that began in Africa, and not voluntary ones either. It is headed The Slaver Gordon, His Dying Soliloquy. It is a song sheet of an imagined dying lament of Nathaniel Gordon, the only American slave trader executed under the Piracy Law of 1820. The song kindly describes Gordon as a man consumed by his conscience who acted out of greed. His supporters appealed to President Lincoln for a pardon, but while Lincoln issued many pardons during his administration, he was unwilling to be soft on slave traders. £600 (US $807).