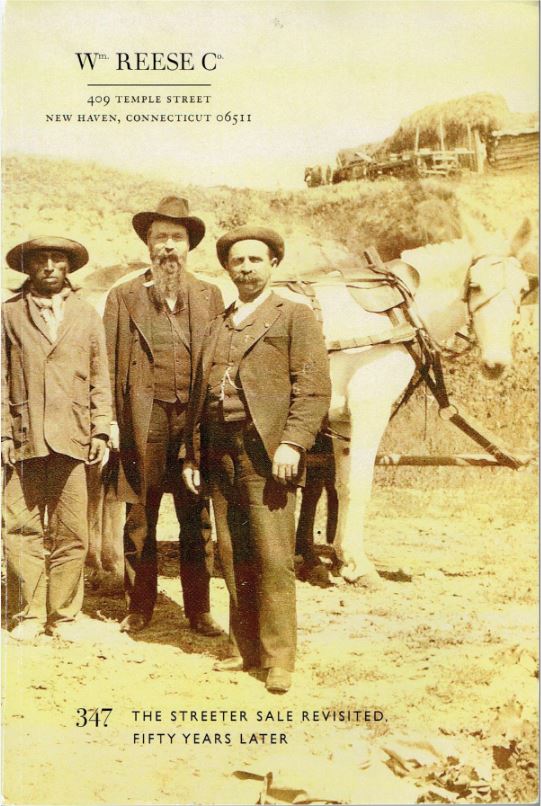 The William Reese Company has issued a catalogue that will appeal to anyone who loves printed Americana. The title is The Streeter Sale Revisited, Fifty Years Later. Thomas W. Streeter, Reese says without exaggeration, "was the foremost collector of Americana in the 20th century." A lawyer and businessman, Streeter began collecting books in his 30s. At age 56, he retired from other pursuits to devote the remainder of his life to collecting books and writing about them and about his collection. Americana was his subject, with Texas being a specialty within this specialty. He had by far the greatest collection in those specialties during his lifetime, which concluded in 1965 at the age of 82.

After completing his great bibliography of early Texana, Streeter sold his complete Texas collection to Yale University. Other portions were given to various institutions. However, he retained his main Americana collection for the rest of his life. He planned for it to be sold at auction, and prepared for that auction, but had no intention of sticking around to see it. One imagines that would have been too painful. So, the sale came after he died. Still, the descriptions used were primarily those had had prepared in advance. The Streeter Sale was conducted by Parke-Bernet, America's foremost auction house at the time, running for 21 sessions over three years, from 1966-1969. When finished, it was the highest grossing book sale ever in America, bringing in slightly over $3.1 million. Streeter provided an unusual bonus to certain institutions. He gave them a combined $400,000 in credits that had to be used at his sale. Nevertheless, most of the material in his collection went to private collectors and booksellers, leaving a trail of records in later years with which to follow the journey of his books.

Reese has done just that wherever possible. He has kept a record of to whom Streeter's items were sold, wherever that was obtainable, and subsequent sales of Streeter's material whenever such information is available. That provides a fascinating addition to the descriptions in this catalogue. Reese also provides the sale prices at the Streeter sale, and of subsequent sales when that is available. Most of the books in this catalogue were not Streeter's personal copies, but all are of titles sold in the Streeter sale. The catalogue does note when an item in it was actually Streeter's copy. It does mean that everything in here was deemed of at least sufficient significance for Streeter to believe they were worthy of a great collection. Here are a few.

For most explorers that came to the America, the continent was a place to search for riches, create settlements, or just to learn what was there. For a few, however, America was just an obstacle. Greater trade was taking place between Europe and Asia, but to reach those markets, sailors had to go from the northern continent of Europe, all the way south of South America or Africa to make the long journey. The trip would be so much shorter if they could essentially go due west. However, North America stood in the way. Nevertheless, they believed a shorter route could be found by sailing along the north side of the continent, the legendary Northwest Passage. Many figured there must be a way from the southern inlet, Hudson Bay, to the Pacific along the north side of the continent. During the 17th century, explorers had already concluded such did not exist. Explorations ceased until Arthur Dobbs, unconvinced, financed a voyage led by Captain William Moor. Item 62 is an account of that attempt, A Voyage to Hudson's-Bay, by the Dobbs Galley and California, in the Years 1746 and 1747, for Discovering a North West Passage... The author was Henry Ellis, the mission's surveyor and hydrographer, published in 1748. He first recounts the many previous attempts before describing his own. Ultimately, it too failed. There is no Northwest Passage from Hudson Bay, and the more northerly route finally discovered a century and a half later is too shallow, and frozen too long, to be of any practical use. Priced at $1,750.

"Four score and seven years ago..." We all know those words, taken from one of the greatest speeches ever given. It's appeal is in its moving words and mercifully short duration. More about that later. Item 130 is the first appearance in book form of the Gettysburg Address. Published in 1843, the title is An Oration Delivered on the Battlefield of Gettysburg... by Edward Everett. Edward Everett? Wasn't it somebody else...? There is, of course, something more than a printer's error here. The main address that afternoon was given by Senator Edward Everett, a rambling affair that last one and a half to two hours. It wasn't until later that people realized that Abraham Lincoln said more to reach people's hearts in his few brief words than did Everett, though the latter was noted as a gifted orator. Even he immediately realized that he blew it. Thankfully, Lincoln's brief words also appear in this 48-page booklet, on page 40. $40,000.

Now, here's a word from the other side. Item 44 is the rare third and final draft of the Confederate Constitution. Not all of the southern states had yet seceded when a convention was called on February 4, 1861, in Montgomery, Alabama, to form a new government. It was patterned on the U. S. Constitution, with adjustments, of course, more suitable to the South. There is more in the way of states' rights, even allowing the individual states to maintain their own armies and navies. No internal improvements to facilitate commerce could be undertaken by the Confederate government, presidents would serve a single six-year term, and the President was granted a line item veto. American presidents would love that one. Not surprisingly, it includes a provision barring the adoption of any law prohibiting "the right of property in negro slaves." Presumably, laws could be passed prohibiting white slavery. The first two drafts of the Confederate Constitution were meant to be working copies, with space between lines for corrections, while this was the final document. The caption title reads, In Congress – March 9, 1861 – Amended Constitution – 100 Copies Ordered to Be Printed. Constitution of the Confederate States of America. Of the presumed 100 copies printed, only five are still known. $175,000.

Item 76 is sheet music for the 1864 song Idaho. This ode describes the Idaho Gold Rush, and I will admit I never knew before there was a gold rush in Idaho. Sing along, if you know the tune:

"They say there is a land,

We'll need to pick or spade,

The largest chunks are 'top a ground.,

What a surprise it must have been when the prospectors realized those "gold" nuggets were really potatoes. The author of this song was Frank French, or maybe French Frank. $1,250.

William Henry Harrison was an American diplomat in 1829, and not a very diplomatic one. Harrison was appointed ambassador to Colombia in 1828, and soon managed to get himself into a battle with the George Washington of South America, Simon Bolivar. Not diplomatic at all. Harrison concluded that Bolivar was trying to become the Napoleon of South America, to make an emperor of himself and unwisely got himself too closely involved with opposing factions. Harrison wrote Bolivar a letter urging him to adhere to the principles of Republican government. That was out of line. Bolivar responded, calling Harrison a "dotard." Not really. However, his supporters were deeply offended. Fortunately, President Jackson had already sent a new ambassador to replace Harrison, who arrived the next day. The following year, Harrison published this book to justify his conduct: Remarks of General Harrison, Late Envoy Extraordinary and Minister Plenipotentiary of the United States to the Republic of Colombia, on Certain Charges Made Against Him by that Government. In fairness to Harrison, Bolivar had earlier seized some dictatorial powers for himself, though it was more an attempt to keep the country from disintegrating among competing factions than to become an emperor. Harrison would be elected President of the United States a decade later, his only notable accomplishment being to die in office a few weeks later, achieving nothing other than making the unqualified John Tyler President for the next 3 years and 11 months. Another bad move. Item 87. $1,000.