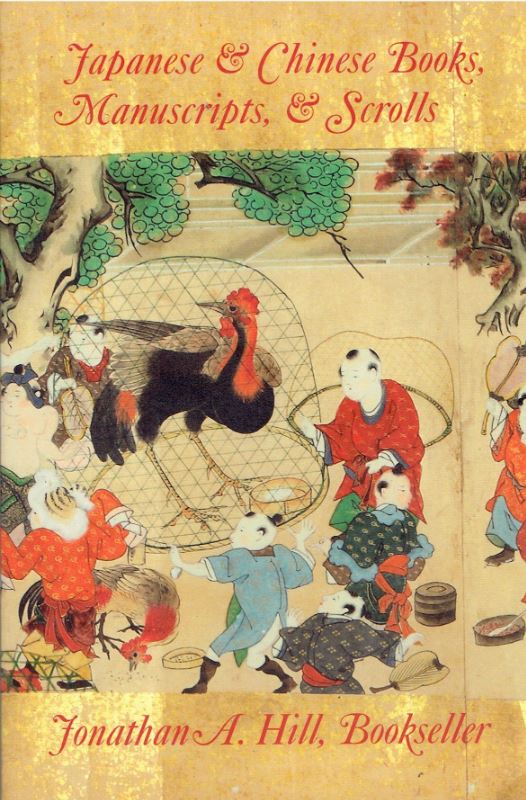 Jonathan A. Hill, Bookseller, has issued a catalogue of Japanese & Chinese Books, Manuscripts, & Scrolls. It is unusual to find an American book catalogue containing material from East Asia let alone devoted to it. Times are changing, the world is getting smaller, and an increasing number of Americans have an Asian background. Meanwhile, the internet has opened the door to American booksellers offering their wares anyplace in the world. It is a trend that inevitably will continue.

That said, it is a bit more difficult describing Japanese and Chinese books. The use of characters, rather than Latin letters, makes it hard to list even titles, other than phonetic spellings. We will instead use Hill's English translations where available. Fortunately, most of the items offered feature notable illustrations, and pictures do provide a universal language. Here are a few selections from this catalogue.

We begin with a printed book from long before Gutenberg, 1297 to be precise. What? Printing before Gutenberg? Gutenberg's invention related to printing with movable type, which opened the door to large printings of multiple titles. However, in Asia, items were printed with blocks as long as seven centuries before Gutenberg. Books, naturally, required more elaborate carving than small items such as currency. The title of this book translates to Commentary on the Awakening of Faith in the Mahayana. Mahayana is the largest strain of Buddhism today. Hill describes the item as "Extremely rare; this is one of the earliest substantial woodblock printed books created in Japan to survive." It was printed at the Todaiji Temple in Nara, the writer being Chinese scholar Fazang, who lived in the seventh and early eighth century. This book consists of two volumes in accordion style. Item 60. Priced at $125,000.

Next up is a "beautifully illustrated & vividly colored scroll," entitled (translated) Military Exercises at the Estate of Kano, Lord of Bicchu, in the Fifth Year of Kaei. The fifth year of Kaei would be 1852. Japan had for centuries practiced isolationism, keeping foreign powers out of its land. However, pressure was coming from Britain, Russia, and the United States to open its doors. In Japan, there were two factions debating how best to defend the country. One wanted to hold to traditional Japanese methods of defense, the other believed western weapons should be employed. This scroll illustrates the latter. It depicts Lord Kano's uniformed private army, drilling with rifles and cannons. They weren't professional soldiers, but farmers, fishermen, and merchants well organized and equipped with the latest military technology by the Dutch. The scroll opens with the entrance to the estate, and proceeds through the family's banners, arriving dignitaries, a wider view of the parade grounds and preparation, headquarters, leaders in ceremonial armor, and on to various formations. Later sections display live-fire exercises. It was all for naught. A year later, American Commodore Matthew Perry arrived, and by 1854, Japan was forced to open its doors to America through Perry's exercise of gunboat diplomacy. Item 20. $9,500.

The completion of the forced opening of Japan to foreign trade did not bring internal peace. Political assassinations became common events on the streets of Kyoto. Some favored the shogun, whose influence was now waning, in his attempt to cooperate with the West. Others considered this a betrayal of Japanese traditions and wished to see the restoration of power with the emperor, which would happen a few years after this manuscript was created. It describes assassinations in Kyoto, complete with 21 pen and ink drawings of gruesome subjects. The victims were mostly supporters of the shogunate. The images show their severed heads on stakes or their bodies tied to racks. Accounts of their misdeeds are provided. Item 26. $4,500.

Next up is another pair of scrolls. These are from the Sado Island gold and silver mines. Gold was discovered on Sado Island in 1601 and mining continued until the late 20th century. It was a major source of income for Japan for several centuries. Tens of thousands of people worked the mines, including many homeless people, sent to the mines as effective slave laborers to perform difficult jobs. These scrolls depict many aspects of the mining, miners in the shafts, buckets to remove water, baskets to carry ore, ventilation systems, crushing and grinding of ore, water courses to separate the metal from the rocks and dirt, along with related activities such as tool making, surveyors, auctioning of ore, office workers, government officials, and security devices to prevent the workers from stealing any gold. Item 43. $19,500.

This 1846 first edition translates to Illustrations of Dolls for the Tenjin Festival. The author was Kanenari Akatsuki, the illustrator Hanzan Matsukawa. The Tenjin Festival is a major event, dating back to the year 951. It honors the ancient scholar and icon of learning Michizane Sugawara, today a deified figure. In the 17th century, a custom evolved where residents of the various districts of Osaka would build beautiful dolls based on main characters in classical theater. Each was about 8 feet tall. In the 19th century, there were around 50 of these dolls, but only about 15 still survive. Hill notes that "this book is the best record of these dolls, many of which no longer exist." Forty-three dolls are depicted, 28 in full-page woodcuts with accompanying text explaining by whom and where they were made, with their meaning and symbolism, and detailed descriptions of clothing and ornaments. Item 3. $4,500.