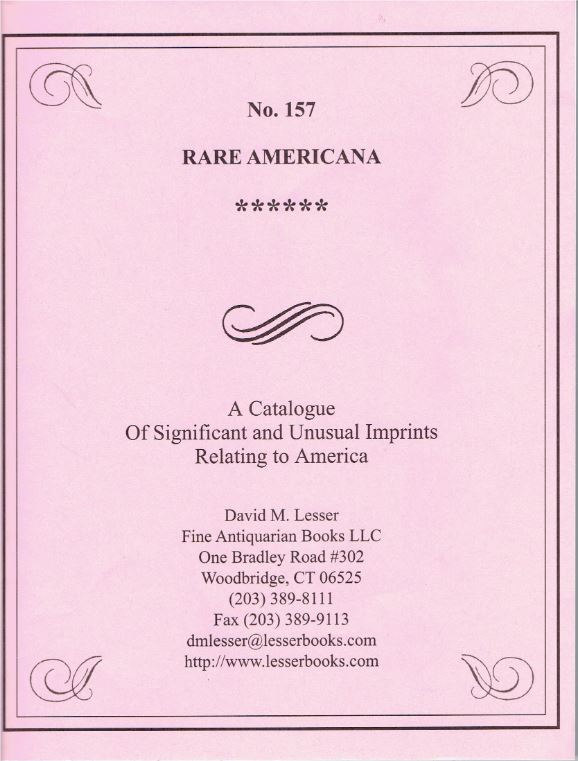 David M. Lesser Fine Antiquarian Books has issued their 157th catalogue of Rare Americana. Most material pertains to the period ranging from the Revolutionary War era, to the era of the Civil War. That is a trip from unity to disunity, and then quickly and violently back again. The period had its share of troubles, north-south, slave-free, religious debates, political competition. We have similar battles today, and in a hundred years, future generations will look back at our times the way we do at these earlier ones, and wonder why didn't they all just get along? Here are a few selections from this latest Lesser catalogue.

The author of this publication spent most of his career in controversies, but this was not one of them, and it would not be until a few years later that he would become totally despised by his constituents. Item 87 is a broadside proclamation headed Province of Massachusetts-Bay, June 6, 1760. By the Honorable Thomas Hutchinson, Esq; Lieutenant Governor and Commander in Chief. It offers bonuses to people who recruit enlistees to fight in the French and Indian War. While not yet Governor, as he would later become, Hutchinson's authority was based on being Acting Governor at the time. This would hardly have been a controversial proclamation, as British and colonist interests were still aligned. However, once that war was over, and the British began taxing the colonists for the war and continued defense, Hutchinson's reputation plummeted. He attempted to steer a middle course, enforcing British mandates while arguing with his superiors not to so burden the colonies. However, the colonists of Massachusetts were becoming increasingly radicalized by British actions, and as Barry Goldwater would say years later, "moderation in pursuit of justice is no virtue." The colonists shared that viewpoint. Hutchinson came to symbolize British authoritarianism, particularly after the Boston Tea Party, and was driven into exile. Priced at $2,000.

A century later, independence won, America unraveled. The issue was slavery. The South seceded, and churches in the South had to choose between union with their northern brethren or loyalty to the South and its "peculiar institution." Most chose the latter, sometimes by denigrating the slaves humanity, as did so many politicians, or other times by defending slavery on more "humane" grounds. Item 35 is one of those more "humane" justifications: Pastoral Letter from the Bishops of the Protestant Episcopal Church to the Clergy and Laity of the Church in the Confederate States of America. The letter was published on November 22, 1862. Written by Bishop Stephen Elliott of Georgia, it claims that the southern church finds itself, at the moment, "forced by the providence of God," to separate itself from the rest of the church. Therefore, it had to change its constitution and liturgy, but only where necessary to reflect the new nation. It then goes on to explain that, "The slaves of the South are not merely so much property, but are a scared trust committed to us, as a people, to be prepared for the work God may have for them to do in the future." Somehow, the slaves just didn't appreciate their masters' selflessness. $450.

Next we have a political broadside, To The Voters of the Fourth Congressional District of Mississippi, a promotional effort by William Augustus Lake, running for the Confederate Congress in 1861. Lake had served one term in the U.S. Congress, elected as a member of the American Party (Know-Nothings) in 1854, defeated in 1856 as that party's fortunes waned. However, with Mississippi seceding, he was back again, and like everyone else running in the South those days, was rabidly pro secession. In this October 1861 broadside, Lake proclaims, "...we have but one object, namely: to conquer a peace and secure our national independence. Nor can there be any controversy as to the means necessary to obtain this end. War! War! is the only way. It will, therefore, be seen that there is no chance for party divisions and party issues." Lake called for unity among southerners, but this did not apply to him and his opponent. He was killed by his opponent, Henry Cousins Chambers, not just in the election, but quite literally. For reasons unclear, the competition between the two became personal, and it ended in a duel. Each fired three times, unsuccessfully. Chambers' fourth shot hit its target. Chambers went on to handily defeat his deceased opponent, and, wisely, no one opposed him for reelection in 1863. Item 80. $3,500.

As the war effort grew more desperate for the South, the Confederacy turned to desperate measures. On February 1, 1864, Lee's surrender but 70 days away, the following speech was made before the Confederate Congress: Speech of Hon. Thos. S. Gholson, of Virginia, on the Policy of Employing Negro Troops, and the Duty of All Classes to Aid in the Prosecution of the War. It was desperate indeed to arm the slaves, since a Confederate defeat would mean their freedom, already recognized in the United States as a result of the Emancipation Proclamation. However, the South had virtually run out of warm bodies to fill its ranks, by then enlisting those normally considered to old or too young to maintain its ranks. Slaves were already used in non-combat roles, such as building fortifications, but they could be controlled by armed guards in these jobs. Handing over guns to slaves, who might turn on white Confederates to escape to freedom, was too great a concern. Gholson argues against the proposal, claiming "our slaves," normally "timid," would "become licentious and fanatical. They are credulous, and may be easily deceived." Perhaps a better way of explaining his fear of the slaves turning on them would be to quote Barry Goldwater again, "extremism in defense of liberty is no vice" (when was the last time Barry Goldwater was quoted twice?). Perhaps even worse, Gholson notes that if blacks and whites are put in the same army, treated practically as equals, "We will have conceded, that they are worthy of freedom." Among those who led the fight against this proposal was the aforementioned Representative Chambers, who normally rubber-stamped every Confederate proposal. Item 65. $1,500.

After the war, there were organizations throughout the South that sought to return that region to essentially what it had been before, except with Jim Crow replacing legalized slavery. Such organizations were sparse in the North, but here is one, formed in Indiana, which would later become a northern hotbed for the Klan. They were called the Union White Boys in Blue. It was composed of Union veterans (and others) whose views were essentially those of the wartime Copperheads. The organization, which drew most of its members from Indiana and Ohio, were opposed to the much larger Union veterans' organization, the Grand Army of the Republic, which held the "White Boys" in contempt. The "White Boys'" constitution called for an end to Reconstruction, the defeat of General Grant in the 1868 presidential election in favor of the more accommodating Democrat, Horatio Seymour, and had little trouble in expressing their racist sentiments. They sought the elimination of the Freedmen's Bureau, that attempted to aid the freed slaves, while their constitution declares, "That we are opposed to negro supremacy and the domination of an inferior, degraded race in these States [the South], by which one-third of our States are to be ruthlessly abandoned to the mismanagement and control of barbarism; and that it is not in the heart of American citizenship to brook the relinquishment of that vast southern domain to negro ownership..." Item 146 is a membership certificate in this organization, headed In the Name and by the Authority of the White Boys in Blue of Columbus, Ohio. It is dated December 1, 1868, signed by local officials, and was granted to (written in manuscript) Alexander McCoy. McCoy was made an "honorary member," which leads one to suspect he was not himself a Union veteran. Item 146. $450.

If, instead of membership in an anti-African American society, you would prefer membership in an anti-Catholic one, here is a perfect alternative. This is a certificate of membership in the American Protestant Society. Formed around the same time as the emergence of the Know-Nothings, the American Protestant Society regularly attacked the Catholic Church, believing the church to be contrary to republican ideals and controlled by a corrupt pope. Both organizations had arisen as a result of an influx of Catholic immigrants from Ireland and Germany at the time. However, rather than consigning Catholics to near slavery, as the "White Boys" wished for blacks, the American Protestant Society sought to convert them. Item 3 is a July 1848 certificate of lifetime membership to the organization for Col. Darius Branch, and it did not come cheaply. It required $25 in donations, a serious sum in those days. A lifetime membership was not that good of a deal for Branch as he died just three years later, but that was longer than the lifetime of the American Protestant Society. It ceased to exist as an independent entity the year this membership was granted. Instead, it combined with two similar organizations to form the American and Foreign Christian Union. The AFCU had much success in the 1850's, the high point for the Know-Nothings, but faded after that. However, the AFCU, which included foreign missions, still exists today, for the most part running an English-speaking church in Paris, which it has run since its early days, with smaller churches in Berlin and Vienna. Item 3. $500.

Item 40 is a campaign banner for a man who, I think, most whites and blacks, Protestants and Catholics, can agree was one of our worst presidents. It is The Democrats Choice for President & Vice President from 1853 to 1857. The Democrats' choice for President was New Hampshire's Franklin Pierce, the quintessential northern man with southern principles. Pierce essentially fiddled while Rome burned. Unlike his comparably mediocre successor, James Buchanan, who gave in to the South at every turn hoping to stave off secession, Pierce's sympathies were aligned with his southern brethren. Equal billing is given to William King, Pierce's running mate. King was sort of the William Henry Harrison of vice-presidents. Ill with tuberculosis, he traveled to Cuba, hoping the mild climate would aid his recovery. TB doesn't work that way. As a result, he was given his oath of office in Cuba, but died barely a month later without ever making it to Washington. This hand-colored banner was created by lithographer Nathaniel Currier, later noted for his partnership with James Ives. $850.