The Transmission of Medical Knowledge from Rivverun Books & Manuscripts 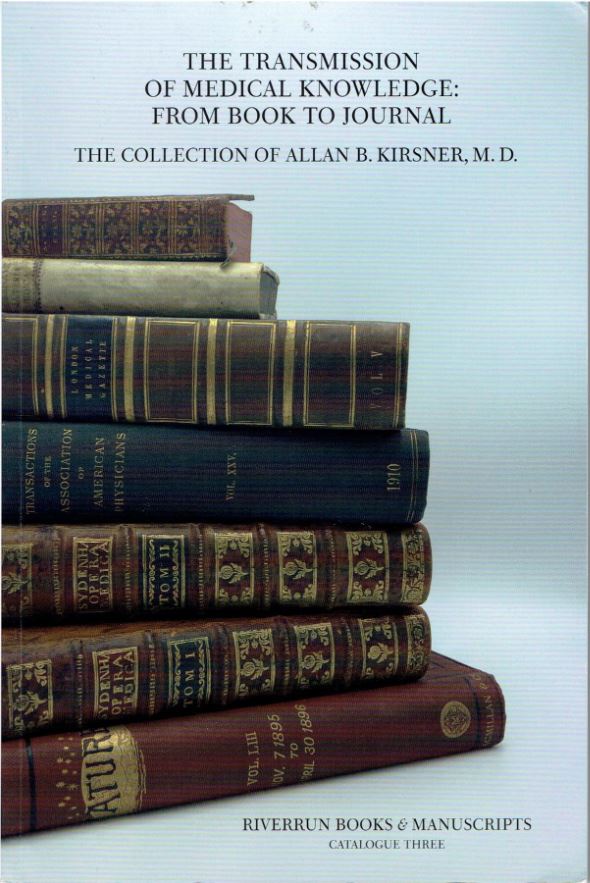 The Transmission of Medical Knowledge.

Riverrun Books & Manuscripts has released a catalogue of The Transmission of Medical Knowledge from Book to Journal. The Collection of Allan B. Kirsner, M.D. The "book to journal" part of the title, Riverrun explains, has to do with how most medical knowledge has been transmitted. For a couple of millennia, it was through books, providing details of what was known about a subject. However, with the development of the scientific method and the great expansion in research and testing which followed, a need grew to transmit new findings quickly. The result was that in the 18th century, medical journals began to appear, regular publications providing up to date news. Today, most new developments reach the field in this manner, though guides for the layman are still more often found in book-length treatises.

The collection at hand was compiled by Dr. Kirsner during his medical school days. It has remained essentially unchanged in the half century following in which he has practiced medicine. The result is a collection formed over 50 years ago, of material some of which would be harder to find today. Many of the items in the catalogue are of a technical nature, terminology of diseases and conditions not terribly familiar to the average person. I doubt I could do justice to a description of Observations on the etiologic relationship of achylia gastrica to pernicious anemia. These items are for those with deeper medical knowledge. However, others will be of interest to those who approach the development of medical knowledge more as patient than physician, books and journals understandable by the rest of us. We will focus on this type of material as we look at some samples from this catalogue.

We begin with one of odder cases of medical research. The book is The Physiology of Digestion, with Experiments on the Gastric Juice, by William Beaumont. This is the 1847 second edition of a book first published in 1833. Beaumont was an army physician when a Canadian trapper, Alexis St. Martin, was brought to him suffering from a severe gunshot wound to the stomach. St. Martin's chances did not look good, but Beaumont was able to save his life. However, the wound never completely healed. Beaumont was able to fashion a piece of skin to cover the hole. St. Martin was in no shape to return to trapping, so Beaumont hired him as an assistant and began using the hole in his stomach to make observations. He was able to look inside to see what was going on, and even conduct experiments, such as attaching a piece of food to a string, putting it inside St. Martin's stomach, and later pulling it out to observe the results. Beaumont's work is considered the most important on digestion prior to Pavlov. As for St. Martin, he later returned to the woods and lived to be 78. Item 14. Priced at $450.

Next is the first announcement in English of one of the most important tools in medical diagnostics. The title of the article is On a New Kind of Rays, by William Rontgen. It appears within a volume of issues of Nature, A Weekly Illustrated Journal of Science, from November 1895-April 1896. Rontgen was experimenting with a cathode ray tube, others already aware that it produced rays with penetrating power. What he accidentally discovered is that those rays had the power to create images. He called in his wife and aimed the rays through her hand. It created an image of the skeleton inside. Rontgen had discovered x-rays, with the obvious medical use quickly to follow. Item 142. #3,250.

From diagnostics we turn to prevention. Like Rontgen, Louis Pasteur was a scientist, not a physician, though his discoveries are among the most important to medical science. While not the first to surmise that microbial agents were the cause of many processes, including disease, it was his experiments that proved this to be a fact. Up to his time, the prevailing theory was that spontaneous generation was the cause of such things as fermentation. These things just sort of happened on their own. Pasteur performed experiments using sterilized flasks and comparing the results when opened to air or kept sealed to prove that material had to be exposed to air, and the microscopic life within it, for fermentation to take place. It led to the process of pasteurization, where a liquid is heated to temperatures sufficient to kill any germs, and then sealed, to prevent it from going bad. We think of pasteurization primarily as used for preserving milk, but of course, there is an even more important drink it preserves – beer. Item 134 is his study of beer, Etudes sur la biere, ses maladies, causes qui les provoquent, procede pour la rendre inalterable, a first edition published in 1876. $750.

This item is an odd work from 18th century philosopher George Berkeley, Bishop of Cloyne (in Ireland). Berkeley wrestled with the philosophical issues of his day, in his case, trying to understand the relationship between the material world and observation. For him, all we could really know was what our senses revealed, as opposed to what material world might lie behind it. The world, in effect, consisted of consciousness and sensation. God's role was to determine what we sensed. This work contains some of his philosophical musings, but goes beyond to some not entirely accurate scientific/medical claims: Siris, a Chain of Philosophical Reflections and Inquiries, Concerning the Virtues of Tar Water, a second edition (1744). Tar water is a mixture of pine tar and water. Berkeley believed it was something of a cure-all, recommending it to treat everything from cancer to fevers, dysentery, rheumatism and asthma. If you believe in the theory that if something tastes really bad it must be good for you, then tar water is certainly a great remedy. Berkeley wasn't completely out of his mind in finding the product has its virtues. Pine tar can be used as an antiseptic, but the Bishop raised its positive qualities well beyond reality. Item 15. $400.

Here is a guide for anyone wishing to return to more traditional medical practices: Bright's Practice of Medicine: A New and Improved Family Work, with a Plain Practical Treatise on the Diseases of Women and Children, published in 1846. John W. Bright was a Kentucky physician who, along with having a long-running practice (he was the oldest practicing physician in the state when he died at age 89), wrote numerous medical books for the public. His emphasis was on diseases of women and children up to their early teen years, though everyone is covered in his manuals. His book also contains a section on the comparative gestation of livestock, which the preface says "will be found to be a very important one to farmers and stock-raisers," though I have no idea what it is doing in a medical book such as this. Item 23. $350.