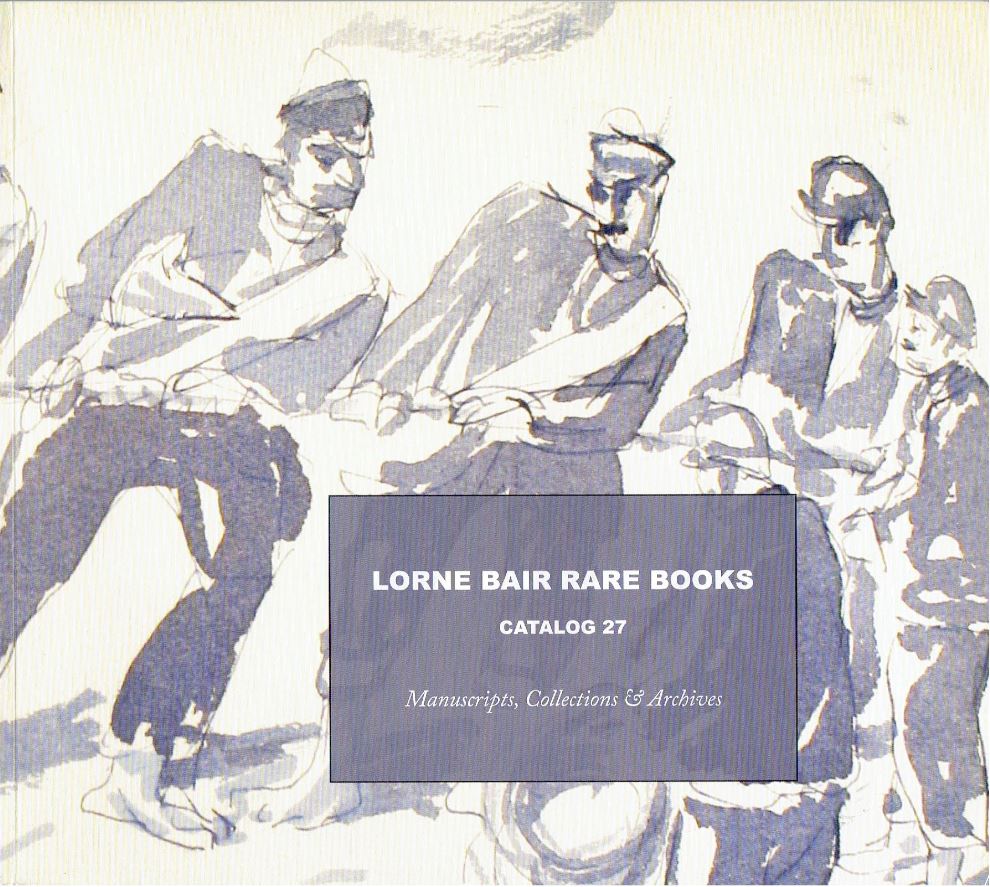 Lorne Bair Rare Books has published their Catalog 27 Manuscripts, Collections & Archives. Unstated in that title is Bair's focus – social movements of the later 19th and 20th centuries. Bair's concentration is generally on such movements from the left, but this time, we found quite a bit of material from the right. In either case, right or left, it is far from the center. What is not to be found is the middle of the roaders, the elusive moderates. They may make good managers, but the reading is boring. Nothing in here is boring, even if it can make your blood boil. Here are a few samples.

We begin with one of those archives and it comes from the far right. It is a collection of almost 200 pieces related to the German-American Bund. The archive includes material from a predecessor organization formed of ethnically German American citizens and residents through the direction of the German Nazi party shortly after they came to power in 1932. Its aim was to make Americans more sympathetic to the Nazis, stirring up much antisemitism along the way. By 1936, the German Nazis found their participation more embarrassing and counterproductive and withdrew their collaboration. Instead, the independent Bund was formed, which continued to promote friendship with the Nazis, antisemitism, and isolationism. Clearly, if America entered the war now breaking out in Europe, it would be on the side of the British, so by painting themselves as patriotic, supporters of an America free from European troubles, they hoped to keep America out of the war, the best possible outcome for the Nazis. The group hit its peak in 1939 when a rally at Madison Square Garden drew in 20,000 supporters. They attacked Roosevelt, whose sympathies were strongly pro-British, labeling his New Deal the "Jew Deal." The Bund's popularity came crashing down on December 7, 1941, when the attack on Pearl Harbor sent America to war with Japan and its Axis allies, including Germany. Overnight, it became thoroughly unpopular to be associated with pro-Nazi policies. This archive contains both Bund and anti-Bund material, including pamphlets, broadsides, postcards, photographs, periodicals, correspondence, press releases, and various types of ephemeral items. Item 7. Priced at $25,000.

Item 21 presents another collection of 36 pamphlets, broadsides, etc., from the far right, mainly from the 1930's. It is filled with anti-Roosevelt attacks, along with more antisemitism. Among the writers are noted practitioners of the "art" from the era, Father Coughlin and Gerald L. K. Smith. One proclaims Jews! Jews! Jews Everywhere! and provides one of the early statements of the "Franklin Prophecy," a phony claim that Benjamin Franklin had warned America of terrible consequences of allowing Jews to enter the country, a fabricated speech contrary to Franklin's fundamental beliefs. And then, there is a goofy-looking smiling young man claiming, "Sure – I'm for Roosevelt." I would know him anywhere – Mad Magazine's iconic Alfred E. Neuman. How can that be? Mad did not come about until 1954, long after Roosevelt was gone. A little research reveals that similar images date back as far as the late 19th century, and by the 1930's, some were virtually identical to the image Mad later adopted. Some (not this one), even used the caption "Me worry?" However, the name Alfred E. Neuman was added by Mad Magazine. $1,250.

Time for some political balance, so here is an item – no 12 of them – ephemeral, but we will let them in because they do include Chinese inscriptions. Item 12 is a collection of 12 "Rubber Maos." These are small rubber busts of the Great Helmsman, very similar, but with slight differences, in size, dress, expression, or inscription. Bair informs us that during the Cultural Revolution, it was a good idea to have one of these in your home, and if you couldn't afford a metal or plaster one, a Rubber Mao was an acceptable substitute. However, for all their popularity in China, there was little demand for them in the West, so they are uncommon over here. $750.

Not that his fate was anything but deserved, but this next item still doesn't feel quite right to me. It is a press kit for the execution of Timothy McVeigh. Does the government issue press kits for executions? Evidently, the Department of Justice/Federal Bureau of Prisons did for the 2001 execution of McVeigh. Few deserved it more than he. He conducted the 1995 bombing of the federal building in Oklahoma City, killing 168 people and injuring over 600 more. It was the worst incident of home grown terrorism in U.S. history. The press kit contains 23 documents and six photographs, covering press pool regulations, maps of the prison grounds, and a schedule of events. McVeigh was the first federal prisoner to be executed since 1963 and there have been only two more since. The kit shows the execution date as May 16, 2001, but McVeigh received a last minute reprieve due to some evidence having been withheld from his attorneys. The stay did not last long, with McVeigh being executed on June 11. Item 14. $500.

Item 46 consists of five gummed stickers and one sheet of printed toilet paper! They were issued in 1944 by the U.S. Office of Strategic Services as part of a psychological warfare effort known as "Operation Sauerkraut." On July 21 of that year, some of Hitler's generals had conducted an unsuccessful effort to assassinate him. The OSS figured that Hitler would now be particularly paranoid about internal enemies trying to overthrow him and wished to play on those fears. The stickers contained anti-Hitler messages. The idea was to give them to cooperating released German war prisoners, who would surreptitiously place them in public locations. They were deliberately crudely printed to make them look like the work of some local underground, rather than U.S. forces. It was hoped this would build Hitler's paranoia by thinking there was a local underground movement attempting to overthrow him. $850.