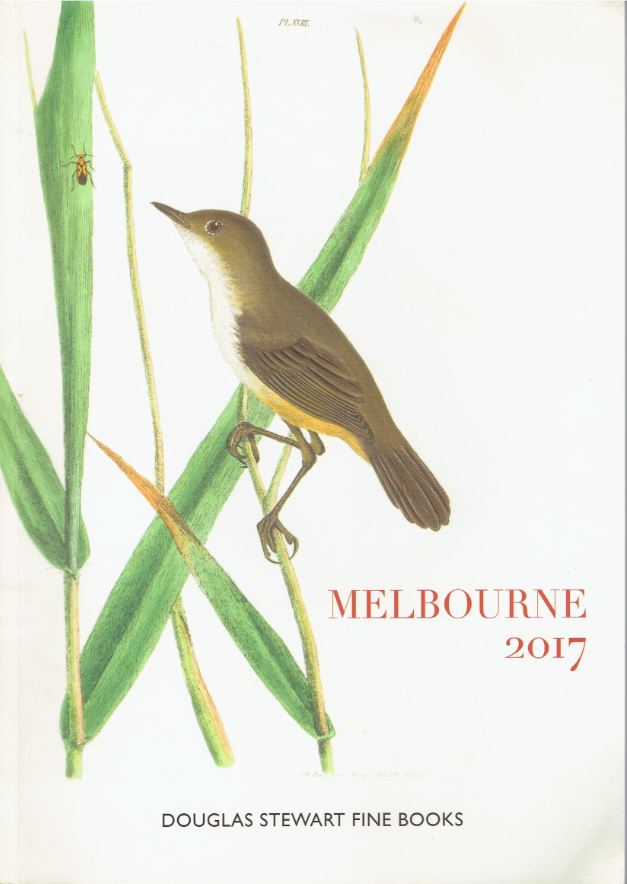 Douglas Stewart Fine Books has issued a catalogue entitled Melbourne 2017. It recognizes the recent book fair in that city. Not surprisingly, Stewart is an Australian bookseller, and you will find more material pertaining to that continent than in the typical European or American dealer's catalogue. Nonetheless, many in Australia collect books having no connection to that land, particularly those who focus on the oldest of books. It is safe to say the likes of Galileo and da Vinci never set foot on Australia, and yet their work can be found in this catalogue too. Here are a few examples.

We begin with a love letter to... Mona Lisa? The identity of the subject of perhaps the most famous painting ever created remains uncertain, but the name of Isabella of Aragon is one that was put forth in a book by scholar Maike Vogt-Luerssen in 2003. More about that later. The letter to young Isabella, then but 11 years old, came from her cousin, Gian Galeazzo Sforza, Duke of Milan. If that sounds rather young, the "romance" had been going on since he was two and she was one. Neither likely appreciated it at that time, but the wedding had already been planned by the family. While the two never actually met until their wedding in 1489, eight years after this letter was written, the two carried on a touching relationship from afar. In this letter, the Duke acknowledges some sort of banner she sent him, and thanks her for a gift "worthy of his love." If he had to go to battle, hopefully not something expected of a 12-year-old, he says he would carry it with him. This was typical of the type of letters the two exchanged until finally meeting and tying the knot. Sadly, the marriage dild not last all that long, though not because the two were disappointed in each other. The Duke died just five years later at the age of 25. His uncle had served as his regent in his youth, and some suspect he offed the poor Duke so he could retain his control of Milan. As for the Isabella-Mona Lisa connection, many possible subjects for the painting have been named, including an idealized woman, da Vinci's mother, even a feminized self-portrait of da Vinci himself, and another woman has long been considered the favorite. However, Vogt-Luerssen pointed out that da Vinci was court painter for Milan and painted numerous Sforza family portraits, and was well acquainted with Gian and Isabella, even planning and staging their wedding. Item 2. Priced at AU $8,000 (Australian dollars, or approximately $6,347 US dollars).

This next item is not a love letter. It was from Lord Horatio Nelson, the great British Admiral, to Sir William Hamilton. It was strictly business, though had Nelson written the letter to Mrs. Hamilton, it might well have been romantic. Nelson's fleet was stationed at Naples in late 1798, having defeated Napoleon in Egypt. However, there was much mischief from the French going on in the city-states of Italy at the time, and Nelson inquires of Hamilton about what support, or lack thereof, he could expect from the Ligurian Republic, centered around Genoa. Eleven days later, the British were forced to evacuate, including Nelson's ships and Hamilton's household. Now, as for that allusion to Lady Hamilton, Emma was a drop-dead beautiful actress and model, with a couple of romantic liaisons and child in her background when she married Sir William, more than twice her age, in 1791. Nelson stayed with the Hamiltons after the Egypt campaign, as Emma nursed him back to health. The two fell madly in love, though both were married. Sir William evidently tolerated the relationship. He died in 1803, which opened up possibilities if Nelson could obtain a divorce, but he was killed in the Battle of Trafalgar just two years later. Emma, now living with their child, was devastated, dying ten years later in poverty in France. Item 15. AU $25,000 (US $19,833).

This book provided Europeans their first glimpse of Australia, but the price paid for these images was horrendous. Item 5 is Ongeluckige Voyagie van het Schip Batavia... by Francois Pelsaert. The not-so good ship Batavia was on her maiden voyage out of Cape Town, headed to Batavia, for which she was named, on behalf of the Dutch East India Company. She was steered off course by some sailors planning a mutiny. The ship wrecked on an island off the western coast of Australia. There was little food and no water, leading Pelsaert, the captain, to lead a group of men to the Australian coast seeking water. They found none. Pelsaert determined their best chance was to make a dash for Batavia a month away in the longboat, a dangerous journey. They succeeded, and given a ship by the governor, returned to rescue the survivors. What they found was horrific. The would-be mutineers, led by one Jeronimus Cornelisz, had killed 100 of the survivors, including women and children, to preserve supplies for themselves. Those remaining lived in terror, the women used as sex slaves. Cornelisz had left a small group of men on a nearby island, assuming they would soon perish, but they found water on their island and survived. When Pelsaert returned with supplies, they warned him of what had happened, saving him from a planned ambush. Pelsaert and his men subdued the mutineers and meted out justice. Among the first images of Australia are justice being applied to Cornelisz. His arms were chopped off with a chisel and hammer, after which he was hanged. Five others were immediately hanged, six later tried and executed in Batavia, and two left on the Australian mainland, never to be heard from again. Offered is an early edition of this tale, circa 1663 (the first was published in 1647). AU $78,500 (US $62,307).

While not obvious at the time, this might well be the most important scientific expedition in history. Item 27 is Narrative of the Surveying Voyages of His Majesty's Ships Adventure and Beagle, between the years 1826 and 1836... There were two voyages, and the first two of four volumes were produced by Captain Philip Parker King and Robert FitzRoy. It was the second voyage, from 1831-1836, commanded by FitzRoy, that was important. That is because of the presence of the mission's naturalist and author of volume 3, Charles Darwin. Darwin spent more time on land than at sea, scouring through plant and animal life, and the geologic record, both along the southern mainland of South America and offshore islands. He was struck by both the overall similarities of species found in the separate locations, but the differences between them as well. He did not have an immediate explanation for what he saw and describes, but he ruminated on the question after he returned. Within a few years he came to a conclusion. It would not be until another 20 years that he finally published his explanation – evolution by process of natural selection – though by the early 1840's he pretty well understood what was going on. While all copies of this book are very valuable, this one comes with a most notable provenance. It was Captain FitzRoy's personal copy. It contains his signature, the set having been passed down through the family in the following years. AU $225,000 (US $178,540).

For those who collect Pope Innocent IV, you are not likely to come across too many contemporary items, so here is one. It is a papal bull, having to do with debts of a monastery, in 1252. Innocent served as Pope from 1243 until his death in 1254. He was elected at a contentious time, as factions among the cardinals debated how demanding to be on King of Sicily/Holy Roman Emperor Frederick II. A compromise candidate in the previous election survived all of 17 days as Pope. It took 18 months to select Innocent, who was thought better able to reach an understanding with Frederick as, when he was a cardinal, the two had been friendly. It didn't work as the two butted heads when Frederick still would not submit to papal authority. Innocent had to flee to France, where he spent most of his papacy, returning only after Frederick died. However, he ended up in confrontation with Frederick's son and successor, and it became too much, Innocent IV dying late in 1254. Item 1. AU $4,850 (US $3,845).