The Wealth of Many Nations from Shapero Rare Books 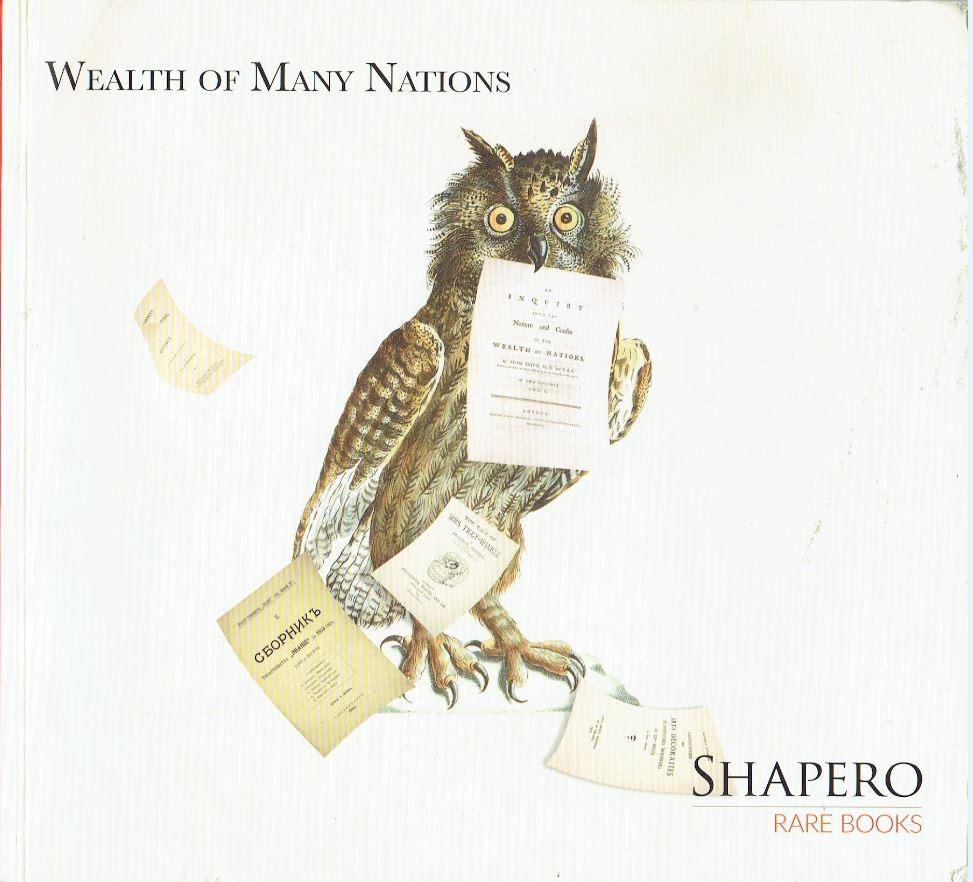 The wealth of many nations.

Shapero Rare Books has created a catalogue of the Wealth of Many Nations. Indeed, there are books from various nations herein, though the title is a play on the most expensive book in this catalogue, Adam Smith's economic classic on the Wealth of Nations. The selections offered are presented under five headings: Fiction, Poetry & Prose; Children's & Illustrated; Visual and Performing Arts; History & Natural History; and Special Interest & Sports. There are also several Russian books to be found, though I won't attempt to describe them, lacking a cyrillic keyboard. Here are a few of the other books to be found.

Oscar Wilde was at the top of British society, a favorite for his wit and intellect, when it all came tumbling down. A homosexual affair with Lord Alfred Douglas, and a backfired attempt to prosecute Douglas' father for so accusing him, led to his being sent to prison. Wilde never recovered, dying in exile a few years after being released, a broken man. He came out of prison with the material for a most successful poem, The Ballad of Reading Gaol. His experience left Wilde as a strong advocate for prison reform, even if his influence was now very limited. Less known from his prison experience is this pamphlet, originally published as a Letter to the Editor. The title is Children in Prison and Other Cruelties of Prison Life, published in 1898, two years before he died. It focuses on the brutality, particularly for children, who were incarcerated with hardened criminals. They were fed bread and water, and not very good bread at that. Wilde was particularly incensed when a warden who gave a hungry and crying child a biscuit was fired. He advocated that no child under 14 should be sent to prison. Item 42. Priced at £2,000 (British pounds, or approximately $2,577 U.S. dollars).

Item 90 is a book of personalities by the prolific writer and statesman, Winston Churchill. The title is Great Contemporaries, and the timing of publication is particularly notable - 1937. It was on the eve of the Second World War and Churchill's elevation to Prime Minister and defender of everything good in the world against the most terrible of evils. However, the book was more back-looking than forward. Several of the 21 essays concern not well-remembered British political figures of the World War I era, along with people familiar from other fields, such as George Bernard Shaw and Lawrence of Arabia. Still others are non-British nationals from the First World War era, Clemenceau, Kaiser Wilhelm II, Hindenburg, and Balfour. And then there is the most controversial figure of the time, Hitler. That essay led some to believe Churchill was too sympathetic towards Hitler, but that is a dubious interpretation. Churchill is positively inclined toward Hitler's rebuilding national pride, and expresses the viewpoint that he could either become a great, admired leader, or a horror of terrible proportions. The attempt to be objective and not as harsh toward Hitler as was already deserved by 1937 needs to be seen in relation to his other essays, gentle on British figures whose failures Churchill was willing to treat as still awaiting the judgment of history. Additionally, Churchill was constrained by a need to be diplomatic considering his government role at a time when it was still hoped peace could be attained. £550 (US $708).

This book was issued to remember a major celebration in Britain, The Coronation Album. Published in 1953, it honors the coronation of Queen Elizabeth II the previous year. It is filled with photographs, the crowd awaiting a look at the passing new Queen, the golden carriage in which she arrived, and Queen Elizabeth and Prince Philip waiving to the crowd. That was 65 years ago, and still they carry on. She is the longest reigning British monarch in history, and if the 91-year-old Queen lives as long as her mother, she could be on the throne another decade or more. If there is one conclusion to be drawn from this, it is that if her her son, Prince Charles, ever becomes King, he will not reign as long as his mother. Item 126 is #54 of 252 copies, and one of 200 copies with first day covers and commemorative coins. £750 (US $965).

Here is another coronation remembrance, celebrating the beginning of a reign that did not last nearly as long as that of Elizabeth. Nor did it die of natural causes. It ended about as badly as it could, though there was little suspicion on this happy day in 1896, nor in 1899 when this album was published. We will hereby go back on the claim not to describe any Russian books, but that is only because this one is bilingual, written in French as well as Russian. The French title is Les solemnités du saint couronement. It celebrates the coronation of Tsar Nicholas II, the last tsar of Russia. The album contains photographs, copies of opulent menus and programs, and an introduction covering coronations of previous Romanov rulers. Nicholas would prove to be an ineffectual leader, over his head, and when the Russian Revolution came, he was helpless to control events, and too slow to get out. He and his entire family were executed by firing squad in the basement of the house in which they were held in 1918. If daughter Anastasia had survived, as long rumored, and was still around, she would have reigned far longer than even Elizabeth, but she did not escape. Item 105. £6,500 (US $8,368).

Item 111 is a history of a French automobile maker, now long gone. The title is Automobiles Voisin 1919-1958, though the company name was Avions (airplanes) Voisin. The explanation is that it started out as an airplane manufacturer in 1906, but after the First World War, founder Gabriel Voisin abandoned the airplane business in favor of automobiles. The cars were distinctive, powerful, eccentric. In the 1920's and 1930's, they were driven for the French President, Valentino, Josephine Baker, and H. G. Wells. The 1930's brought the "legendary" straight twelve, which encroached into the passenger compartment. Even so, that must have been one long hood. Shapero notes that the Voisins' "bizarre appearance has perhaps been softened by the passage of time but were the subject of much controversy in their day, even in France." The company effectively came to an end with the Second World War, though it sort of survived as a nationalized company until 1958, producing something between a very small car and those miniature riding cars for sidewalks made for children. This book by Pascal Courteult was published in 1991 in a limited (though not all that limited) edition of 2,000. £650 (US $836).