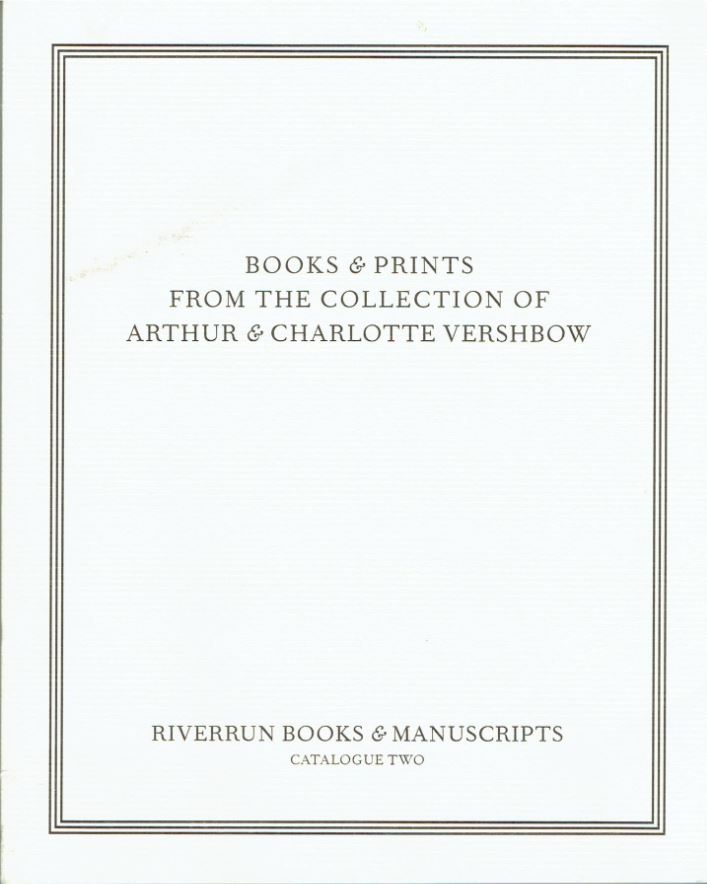 Books & Prints from the Collection of Arthur & Charlotte Vershbow.

Riverrun Books & Manuscripts has issued a catalogue of Books & Prints from the Collection of Arthur & Charlotte Vershbow. The catalogue is divided into three sections: The Middle Ages & Renaissance; the Baroque & Rococo Periods; and the Neoclassical, Romantic & Modern Movements. Arthur Vershbow was a Boston area trained engineer who operated a family manufacturing business. He and his wife, Charlotte, were also avid book collectors, Arthur at one time leading the Boston Athenaeum. They were a well-known couple in the book world. Arthur died in 2012 at the age of 90, predeceased by Charlotte. Here are some of the items being offered that were once part of their important collection.

We begin with a remarkable book for its time – 1588. The title is Le diverse et artificiose machine..., the author Agostino Ramelli. Ramelli displays devices of the highest technology of the 16th century. Many made use of water power to replace the efforts of humans and horses in running machinery. Others depict fountains, bridges, and cranes. "For industrial enterprises there are shown logging mills, metal-working machines, continuous-bucket conveyors, looms for spinning and weaving, bellows, saws and foundry equipment" (Dibner's Heralds of Science). Notable among the devices illustrated is the book wheel or reading wheel. It enabled open books to be rotated like a Ferris wheel. If you are wondering what the purpose was for such a contraption, think of it as a 16th century information retrieval system, allowing researchers to readily move between multiple very heavy books. It was one of those interesting concepts that Ramelli never actually built. Not only is this a most inventive text, but it is also a beautiful, finely illustrated work. Ramelli had seen some of his inventions crudely printed in pirated works, likely by an associate, so he determined to make this presentation so superior that others would not be able to mimic his work. Additionally, the text is provided in two languages, French and Italian. Item 82. Priced at $52,500.

Next we have a book of poems, entitled Poemes, as it is written in French. It was written by the Duke of Orleans, which doesn't tell us a lot as there have been a whole mess of Dukes of Orleans. This was one of the earliest, Charles, the third such Duke, who lived from 1394-1465. His grandfather had reigned as King Charles V, and an absence of direct heirs would eventually put his son on the throne as Louis XII. However, Charles the Duke is known most for poetry, which he wrote in both French and English. There is an explanation for this. Charles was captured by the English in 1415 at the Battle of Agincourt. He was taken to England as a prisoner, and while not locked up in some dingy cell, but instead treated as nobility, he was still not free to leave. It would take 25 years before he was freed to return home. The result was he had lots of time to write poetry, which he did in both his native language and that of his "hosts." This collection of Charles' poems was not published in his lifetime, nor even close to it. It came 500 years later, and it is notable more for the illustrations than the text. The illustrations were created by the noted artist Henry Matisse. Matisse created a manuscript of the poems in his own hand, which he adorned with decorations and portraits in crayon. The book was published in 1950. Item 116. $5,000.

This next set is noted as the first modern herbal, Herbarum vivae eicones ad naturae imitationem... Author Otto Brunfels has been called "the first great mind in modern botany." Writing in the first half of the 16th century, he insisted on the most accurate of drawings, requiring they be drawn from real life. The quality of illustrations was ahead of its time. Brunfels had no trouble giving credit where it was due, highly praising artist Hans Weiditz. This copy consists of two volumes bound as one, and as is often the case, includes the first edition of the second volume and the second edition of the first volume. This anomaly is common because a second edition of the first volume was printed specifically to be sold with the later printed second volume. The second volume was printed in 1531, the first in 1532 (the first edition of volume one was published in 1530). Item 11. $40,000.

Item 28 is Prima [ et Secunda] pars promptuarii iconum insigniorum à seculo hominum, by Guillaume Rouillé. This is a first Latin edition of a book containing over 800 medallion, woodcut portraits of famous men and women, dating from Adam and Eve to Henry II (of France). One imagines some artist's license must have been used in producing likenesses of those first two notable people. Several artists were used in creating the portraits of kings, queens, popes, and various statesmen. However, it is not so much the book as the provenance that is remarkable here. This copy belonged to, and contains the coat of arms of, King Philip II and Mary I. Philip was King of Spain, along with Portugal, a couple of city-states, and for a while, sort of King of England. Mary Tudor, or Mary I, was Queen of England from 1553-1558. She attempted to restore Catholic hegemony over the land, the faith of her mother, but not of her father, Henry VIII, who broke with the Church. As such, she was appreciated by Catholics, despised by Protestants, who, not unjustly, called her "Bloody Mary." Philip, eleven years her junior, married Mary two days after they met. It was not love at first sight. It was a marriage of convenience. Philip became co-monarch, a king except that his kingly rights would only last so long as they remained married. That ended after Mary died in 1558. Philip offered to marry her half-sister and successor, Elizabeth I, but that was not a likely match with Philip wishing to continue the restoration of Catholicism in England while Elizabeth was intent on reversing course and keeping the nation Protestant. Nonetheless, Philip, who lived and ruled Spain until 1598, remained friendly with England for a number of years, but eventually, conflicts made the two nations enemies. It would be Philip who sent out the Spanish Armada in a badly unsuccessful attempt to take over England in 1588. $70,000.

It was the longest running play in London up to its time - 1728. Item 59 is the expanded second edition, with the music printed in the text, for The Beggar's Opera, by John Gay. It was a "ballad opera," satirizing both Italian opera and politicians and other characters of its day. Words were set to popular songs of the time. This ballad opera has reappeared in many forms over the years, even as the style otherwise disappeared. In the twentieth century, it was reconstructed by Bertolt Brecht with new music by Kurt Weill as The Threepenny Opera, the best known song being Mack the Knife. $450.