Several Centuries and a Variety of Subjects from Raptis Rare Books 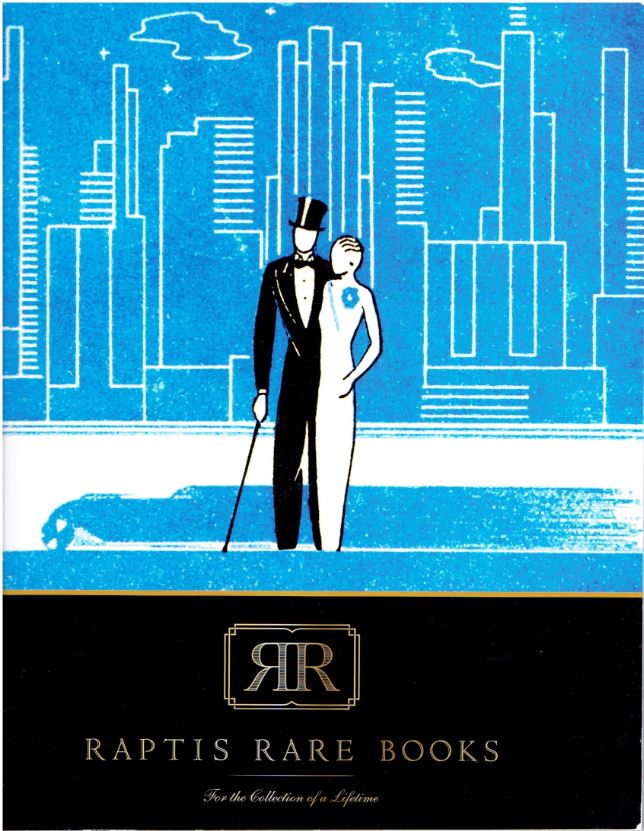 Raptis Rare Books has served up a varied but untitled catalogue of important books and documents from several centuries. Raptis provides a table of contents which gives us a good view of what can be found: Featured Antiquarian Books, Literature, Children's Literature, Nonfiction, Religion & Philosophy, History & World Leaders, Travel & Exploration, Science & Mathematics, Economics & Finance, and Golf. Here are few specific examples of the type of material inside.

Once the American Revolution was won and the peace signed in 1783, George Washington returned to his home, content to resume life as a gentleman farmer in Virginia. Nevertheless, there were still issues of state where his advice was needed, and meanwhile, friends and admirers always wished to visit him. Washington was a welcoming man, but he realized he needed to set aside time for his personal affairs. Therefore, he determined to save mornings for personal business, and leave afternoons available for guests. We begin with a letter he wrote on July 10, 1784, to Reverend Lee Massey, a personal friend. He gently explains, "...I shall at all times be glad to see you at Mount Vernon. Business, & old concerns of the war, with which I have now nothing to do, are still pressed upon me. This, and Company, has left me little leizure hitherto to look into matters which more immediately relate to myself – but finding it necessary, I mean to devote my forenoons to business, while I give the afterpart of the day to my friends..." If Washington truly believed his new nation would just let him fade away into retirement, he would learn in the years ahead how sadly mistaken he was. Item 39040. Priced at $28,500.

Next is a document signed by a notable Spanish ruler of over five centuries ago. It approves of the payment for supplies and services to an assistant. Dated November 20, 1501, it is signed, "Yo la Reyna." Yo, Isabella! (actually, "yo" means I, and the signature is "I the Queen"). Isabella of Castille and Ferdinand of Aragon married and unified Spain, driving the Moors from the European continent. She and her husband instituted numerous reforms, paying off debts, reducing crime, and made Spain into a power. On the other hand, they were also responsible for the Spanish Inquisition and the horrors it produced, including the burning at the stake of Jews who did not properly convert. In America, Isabella is best known for financing the exploration of Columbus in 1492, and we all know what that led to. Item 39080. $7,800.

Here is a Civil War book from a man who is generally associated with something far more pleasant than war. The title is Chancellorsville and Gettysburg, published in 1882. The author was a Union general who led troops at those battles and others. Abner Doubleday was a Union commander, but everyone remembers him as the inventor of baseball. It's dubious whether Doubleday invented baseball, which developed from earlier games. The attribution is more legend than reality, but nevertheless, his name will always be associated with the sport, not war. In his book, Doubleday shares his criticisms of Generals Meade and Howard, while offering insights into others and giving a detailed analysis of the two battles. This copy is inscribed to "Wm. E. Doubleday," Abner's cousin. Item 33046. $4,800.

This next book is magical. Then again, maybe not. Despite his reputation, Harry Houdini did not believe in magic. It was illusion, he explained to the gullible, even though he was the great master of it. His book is entitled Miracle Mongers and Their Methods, published in 1920. He reveals tricks used by people such as fire eaters and sword swallowers. Houdini was particularly contemptuous of mediums, those who put on seances and convinced others they were communicating with friends and relatives from the dead, for a price, of course. This copy is inscribed to fellow illusionist Raymond Gallatovich. Item 37037. $5,800.

Do younger people appreciate or even know the Marx Brothers? I don't know, though if they are fans of old movies, seriously old movies, it would be impossible not to. The Marx Brothers is a book written by Kyle Crichton, published in 1950. By then they had been performing since 1905, though their heyday was the 1930's. This copy was inscribed in 1951 by the author to Marilyn L. Aaronson. Better than Crichton's inscription is that it contains signatures and brief comments from all five of the Marx Brothers. Groucho, Harpo, and Chico, known well by anyone who knows the Marx Bros., have signed, as have the lesser known Zeppo and Gummo. They were more straight men while the first three were the zany performers, each with a distinctive personality. Item 37021. $6,500.

This one is not a book but a whole collection of them. It is 14 books, the complete Oz series, at least, those books in the series written by creator L. Frank Baum. It begins with the most famous of all, the Wonderful Wizard of Oz, published in 1900. The last is Glinda of Oz, published posthumously in 1920, the year after Baum died. The series was continued for many books and years later, but naturally using other authors. Item 35022. $45,000.