A Masterpiece from Peter Harrington 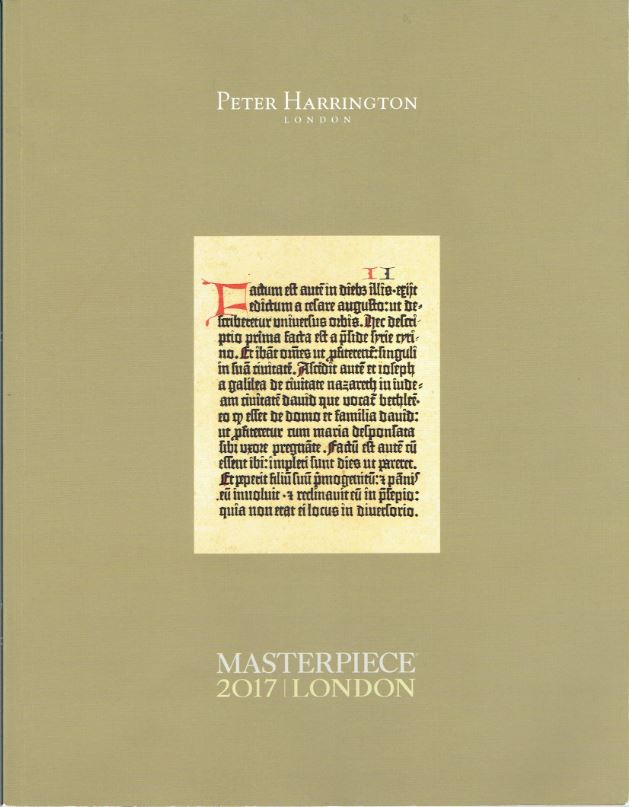 Peter Harrington published a catalogue for the recent Masterpiece London 2017. For those unfamiliar with Masterpiece, it is a show, not a book fair, but a major annual art fair. It attracts collectors at the highest level, and there must be many as the organizers reported there were 44,000 attendees this year. While the great majority of exhibitors featured art of the non-textual type, a few booksellers with high-end appeal recognize that many collectors today focus on a broader swath of art forms, rather than just books. Considering what people will invest in artworks, books are an incredible bargain. They are kind of a throw-in, considering that some paintings sell into nine figures. Unless someone finds the original manuscript copy of the Bible, we are unlikely to see any books on that level. Here are a few of the books Harrington brought to Masterpiece.

If there is one book that could give some of the finest paintings a run for their money it would be the granddaddy of all printed books, a Gutenberg Bible. Don't count on seeing one on the market again soon, or maybe ever. While not the world's rarest book, those copies still extant aren't likely to be changing hands anytime soon. What is still possible to obtain is a leaf from this first book created from movable type, a process that quite literally changed the world, replacing the Dark Ages with the Renaissance. The leaf contains Luke 1:12-2:9, the events leading up to the birth of Jesus. It is tipped into A Noble Fragment: Being a Leaf of the Gutenberg Bible. The book contains an essay by A. Edward Newton. It was created by New York bookseller Gabriel Wells in 1921. Wells had purchased an incomplete copy at Sotheby's, missing about 50 leaves, which he used to create this leaf book. Item 14. Priced at £125,000 (British pounds, or about $162,886 in U.S. currency).

Next is a poignant reminder of one of the saddest days in American history. If you are an American age 60 or over, you will assuredly be able to answer the question, where were you when Kennedy was shot? Item 21 is the Inaugural Addresses of the Presidents of the United States. From George Washington 1789 to John F. Kennedy 1961. It was compiled by First Lady Jacqueline Kennedy as a Christmas gift from the first family for 1963. President Kennedy didn't live to give these presents, having been assassinated a month earlier. Mrs. Kennedy had to give them to close friends as a remembrance rather than a celebratory gift. She had 80 copies bound for presentation, this one being given to David and Sissy (Sylvia) Ormsby Gore. The Gores were longtime friends of the Kennedys, dating back to John's pre-war days in London. David Gore was now serving as British Ambassador to the United States, an appointment resulting from his close personal relationship with the President. Mrs. Kennedy inscribed this copy, saying, "Jack was going to give you this for Christmas, please accept it now from me, with all my love and all the memories of the shining times we had with him. Jackie, December 1963." £22,500 (US $29,396).

Here is a remarkable collection of page proofs annotated by Winston Churchill for his momentous account of The Second World War, produced from 1949-1953. There are 13 sets of page proofs and of galley proofs for volumes 1-6. Churchill's account would win him a Nobel Prize. The archive came from the estate of C. C. Wood, the copy editor who had worked for Churchill earlier as well. Churchill found Wood "intolerable" with his detail and suggestions the former often did not appreciate. Nonetheless, when the first volume was published in 1948, it had an embarrassing number of typos and Churchill was forced to turn to the sharp-eyed perfectionist to prevent further embarrassment. The proofs are filled with Churchill's annotations, particularly in the first two volumes. One sees the level of detail with which he was concerned, despite the voluminous amount of copy he wrote. For example, we see Churchill arguing over punctuation: "This is a good instance of the difference between W.'s feeling & mine. In my view, the commas on each side of 'first' represent pauses, which the sense requires, but those given to 'secondly' do not." A little later, he writes, "Here is a case of W's insensitiveness to the meaning conveyed by punctuation." At a point where Wood has called for greater clarity, Churchill writes, "Sense quite clear." In a more humorous comment, where Wood calls for a quote from Stanley Baldwin to be written in italics, he responds, "He couldn't speak in italics!" Along with the proofs is some associated personal correspondence and there are annotations from Churchill's "syndicate," associates who helped him, particularly on later volumes after Churchill's time for editing was greatly diminished in 1951. That year he was returned to the office of Prime Minister. Item 3. £95,000 (US $124,045).

Item 12 offers another set of author changes, and in this case, the final words of Ian Fleming about James Bond. It is the final typescript for his last Bond novel, The Man with the Golden Gun. Fleming's method of work was to have typescripts made, from which he would make corrections. Three had been produced by June 24, 1964, when he had his latest changes incorporated, receiving his final typescript on June 25. Fleming made notations on it, but still unsatisfied, planned to work on it again the following year. Unfortunately, his health began rapidly to decline and on August 12, he died. Consequently, this was his final effort. Kinglsey Amis would further edit the book. It was published the following year. Most notable in the typescript is that Fleming added a new ending. In his hand, Fleming wrote, "At the same time, he knew, deep down, that love from Mary Goodnight, or from any other woman, was not enough for him. It would be like taking 'a room with a view'. For James Bond, the same view would always pall." £150,000 (US $195,595).

Item 35 is Comedies, Histories, and Tragedies, by William Shakespeare. It is one of the four folio editions published in the 17th century, in this case the third. The first edition was published in 1623, a few years after the author died. It was thankfully put together by friends who wished to preserve his work. Had they not done so, several of his most notable plays would have been lost forever. The first folio was published in 1623, the second in 1632. The third, a reprint of the second, was issued in 1663. The Third Folio is generally believed to be the rarest. The London fire of 1666 is thought to have destroyed many copies. Offered is not the 1663 first impression of the Third Folio, but rather, the second impression of 1664. This is a most important edition because it added seven new plays that were not in the earlier folios nor the first impression of the Third Folio. In time, it has been determined that six of them were unlikely to have been written by Shakespeare, with only Pericles, Prince of Tyre considered authentic. £500,000 (US $651,833).