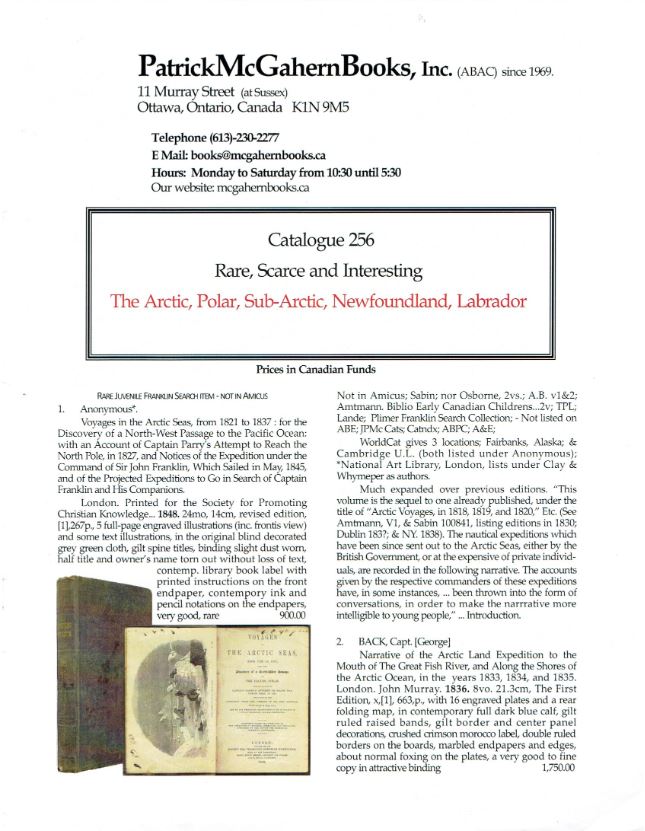 Patrick McGahern Books has issued a new catalogue concerning The Arctic, Polar, Sub-Arctic, Newfoundland, Labrador. One thing that connects these places together is climate. It ranges from places that are cold most of the year to those that are cold all of the year. Many of the books are about 18th and 19th explorations in these far northern reaches. In those days, it took months to even reach starting points, and then movement would be slow. Expeditions had to be planned to last for years as explorers would have no choice but to allow themselves to be frozen in place and wait for the next summer thaw. With no means of communication, even if the explorers became lost or suffered some misfortune, it could be years before anyone even suspected something might be wrong. They were an intrepid lot, gathering information about the most inhospitable reaches of earth, often at great personal cost. Here are a few of these books.

There have been two primary goals that have led explorers to the Arctic, at least that portion in the western hemisphere. One was to be the first to attain the North Pole. The other, more practical aim, was to discover the elusive Northwest Passage. A passage with open water north of Canada, even if open only part of the year, would save an enormous amount of time in travels between England and the Pacific. In the days before the Panama Canal, the only option was to go all the way around the southern tip of South America. Attempts were made in the 17th century to find a route from Hudson Bay, but attempts stopped after Thomas James concluded there was no such route. A century later, William Moor revisited the possibility. His expedition is described in this book written by his hydrographer, surveyor, and mineralogist, Henry Ellis: A Voyage to Hudson's-Bay, by the Dobb's Galley and California, in the Years 1746 and 1747, for Discovering a Northwest Passage... published in 1748. Rather than succeeding where others failed, Moor conclusively confirmed James' determination that no such route existed through Hudson Bay. It put off further searches until the next century, when exploration again began in earnest, this time by seeking a more northerly route. While Ellis could bring no good news about a shipping route, he did return with much information about the area's natural history and the native Eskimo, about whom little was known. Item 10. Priced at CAD $2,500 (Canadian dollars, or approximately $1,935 in U.S. currency).

John Franklin is the most famous of all the Northwest Passage explorers, though not for the happiest of reasons. More about that with the next item, but first we have his first journey. It was horrific, though still not as bad as his final one. Item 12 is Narrative of a Journey to the Shores of the Polar Sea in the Years 1819, 20, 21, and 22, by Franklin, published in 1823. Known as the Coppermine Expedition, twenty men, led by Franklin, traveled up the Coppermine River to the Arctic Ocean. The aim was to survey the coast and search for a northwest passage. It did not go well. They did not get expected support from fur trading companies or natives, the weather was unusually harsh, making game hard to find, and supplies ran out. Forced to turn back, the explorers faced a long journey in a state of near starvation, forced to eat lichen, not much of a meal. Eleven of the the 20 men died, from starvation, cold, and at least one instance of murder. The journey took them 5,500 miles before finally being rescued by natives. Despite the failure and loss of life, Franklin became a hero for his bravery back home in England, which led to further commands. Item 12. CAD $3,500 (US $2,709).

Franklin's final expedition to find the Northwest Passage left England in 1845. Except for a stop along the way, they were never seen again, at least not alive. While no regular means of communication were available, sometimes northern missions would be able to send messages home via whalers they encountered during the summer. They were supposed to return home in 1848. When nothing was heard from Franklin by 1849, concern began to rise. It would lead to dozens of attempts to find him, a search that took a decade before proof came back that the men had all died. Item 21 is an account of the first attempt to locate Franklin when it was feared he was trapped, but survival still likely. It was headed by William Penny, who had established a whaling station in the northern islands. The title is An Arctic Voyage to Baffin's Bay and Lancaster Sound, in Search of Friends with Sir John Franklin, published in 1850. The author was Robert Anstruther Goodsir, a doctor who signed on to Penny's mission in the whaler Advice because his brother was Franklin's naturalist. It was an eight-month search, unsuccessful. They were only able to proceed as far as Lancaster Sound, on the north side of Baffin Island, before being turned back by ice. CAD 2,500 (US $1,935).

Next is an account of a search for another lost explorer, though one not nearly as notable as the searches for Franklin. Item 2 is Narrative of the Arctic Land Expedition to the Mouth of The Great Fish River, and Along the Shores of the Arctic Ocean, in the years 1833, 1834, and 1835, by Captain George Back, published in 1836. John Ross' Arctic expedition had last been heard from in 1829 when people began to get concerned in 1832. Back came up with an unexpected idea for how to search for him. Rather then doing a complete ocean voyage, he suggested traveling up a northern Canadian River to a point along the Arctic Ocean he expected Ross would be found. There was one problem – no one knew where to find this river. It was known only through reports from natives. Beginning at Great Slave Lake, Back proceeded northeast to a Hudson's Bay Company post where he could winter over. The search for Ross is little remembered because that winter, Back was informed that Ross had safely returned home. However, Back still continued on the secondary mission, to find the river, travel to the Arctic coast, and explore the coastline. Back succeeded in all of those aims, traveling 7,500 miles in the process. He called the river the Great Fish River, a translation of the Inuit name, but today it is better known as the Back River. Back served on several of Franklin's missions, including the disastrous Coppermine Expedition, but fortunately not on Franklin's final voyage. CAD 1,750 (US $1,354).

This book is not an account of an exploration, but one of a great many. The title is The Exploration of Northern Canada. 500 to 1920. A Chronology. It was written by Alan Cooke and Clive Holland, published in 1978. This book covers 1,500+ years of Canadian exploration, including the numerous Northwest Passage expeditions. Much in the way of information is included, such as names, dates, points of origin and return, type of journey (commercial or otherwise), purpose and achievements, reference to works about the expedition, and more, all in chronological order. Item 8. CAD $250 (US $193).

Here is an account by a man who traveled far south as well as north, anyplace that was really cold. Item 33 is Voyages of Discovery in the Arctic and Antarctic Seas, and Round the World, being personal narratives of attempts to reach The North and South Poles... Since the book was published in 1884, we know that neither of these poles was attained. Robert McCormick undoubtedly led an exciting life. He participated in Parry's fourth expedition toward the North Pole in 1827. It was the farthest location north achieved as of that time. He was surgeon on James Clark Ross' 1839-1843 Antarctic expedition, in the ships Erebus and Terror. Those were the same ships used on Franklin's ill-fated expedition two years later, and were finally found on the bottom of the Arctic Ocean in 2014 and 2016. McCormick's account of this journey is the only by a participant other than that of Ross. He also commanded one of the Franklin search expeditions in 1852-1853 on board the aptly named ship the Forlorn Hope. McCormick was a naturalist on the famed voyage of the Beagle with Charles Darwin, the findings from which Darwin developed his theory of evolution. However, McCormick and Darwin did not get along well. Darwin got the better, on shore assignments, and McCormick returned home early. CAD $3,000 (US $2,322).