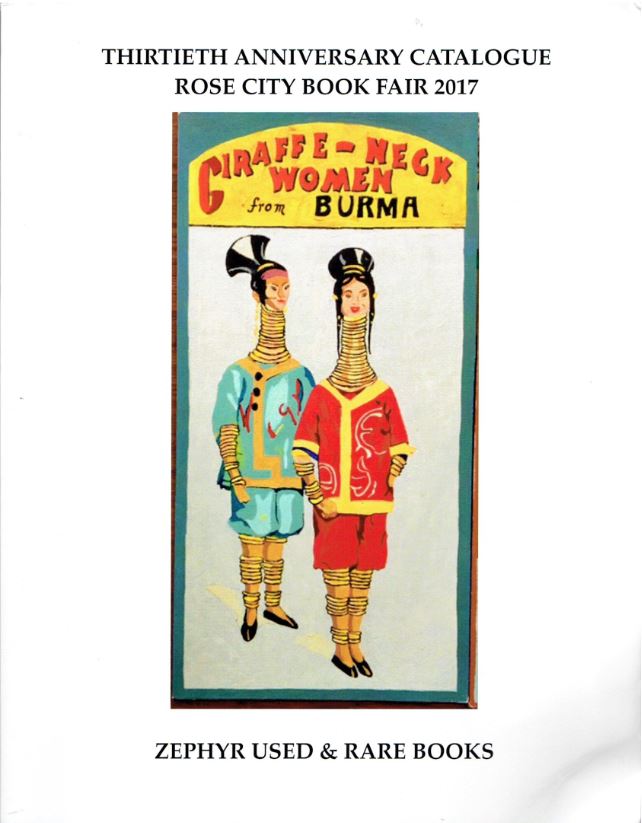 Zephyr Used & Rare Books has issued a catalogue entitled Thirtieth Anniversary Catalogue Rose City Book Fair 2017. That celebrates two events, owner Kol Shaver's 30 years in the book trade, and the recent annual book fair in the Rose City, aka Portland, Oregon. It is hard to describe the material as it is an eclectic combination of obscure books, posters, advertising material, and various other ephemera. It makes an interesting read, and it's hard to emerge from its pages without wanting a few of the items. Here are some samples of what you will find.

We begin with an item designed to inspire pride in young African Americans at a time when Jim Crow was rampant in America – 1921. The title is Colored Girls' and Boys' Inspiring United States History and a Heart to Heart Talk about White Folks, by William Henry Harrison, Jr. Harrison began as a steelworker in Pennsylvania, but turned his attention to inspiring young blacks. This book describes the first slaves brought from Africa to the Virginia colony in the 17th century, contributions by African Americans in the French and Indian War and Revolution, the Underground Railroad, Civil War, and more. He also mentions the all-black town of Boley, Oklahoma, founded in 1904. Harrison describes opportunities for African Americans in California, and the reality of poor treatment of black athletes. This William Henry Harrison, Jr., was not the son of America's shortest serving President of that name with a suffix of "Sr.". His son named W. H. H., Jr. died in 1838, over half a century before this W. H. H., Jr., was born. Priced at $1,250.

This next gentleman certainly did not have to suffer the challenges typical to African Americans in this day. He was not only white, but born to enormous wealth. His name was William Kissim Vanderbilt, Jr., best known as "Willie K." This is the second of his log books he had privately published of his automobile travels, Vanderbilt being an auto and racing enthusiast: Log of My Motor 1908-1911. Vanderbilt created the first major auto racing trophy, the Vanderbilt Cup, which was awarded from 1904-1968. The book describes Vanderbilt's auto travels around Europe during the stated time period. He drove a Renault, which is probably not a car he would be driving were he alive today, and later a Mercedes. About 200 copies of Vanderbilt's log book were printed for friends, detailing his journeys, including mileage, road conditions, places visited, and performance of his cars. This copy was inscribed in 1941 by Peter Breymeier whose father was a racing enthusiast who received his copy from Vanderbilt. $2,000.

Ethel Mannin was a British national whose father was an ardent socialist. She adopted socialist, even communist positions as a young woman. In 1936, she made a trip to the Soviet Union, expecting to find the ideal state. She did not. She trekked around some of the outer regions of the country, where she was less than welcome by officials, but she persisted. By the time her journey was over, Ms. Mannin was quite disillusioned. She found it a place of stifling bureaucracy, which in hindsight we know was hardly the worst thing about the Soviet Union in that era. She came away realizing that Stalinism had little to do with the idealistic socialism of her father. She emerged more of an anarchist. Offered is a copy of her book South to Samarkland, published in 1937. $95.

You are probably wondering about those "Giraffe-Neck Women of Burma" on the cover of this catalogue. I was too. It turns out that this isn't some P. T. Barnum type invention, but is real. One particular, not very large Burmese tribe reveres women having long necks. Starting as young girls, they place rings around their neck, adding more as they grow older. Do these tight rings actually stretch their necks over time? National Geographic once x-rayed some of the women to find out. It turns out they don't. They push the collar bone and ribs down, thereby creating the illusion of longer necks. This image is one of a series of 16 original paintings for side-show posters circa 1950. The artist is unknown except for the initials S. H. Their purpose also is unclear, since many are of acts from long before this time, so they weren't created for live appearances. Other stars of the sideshow to be memorialized in these posters include The Albino Family; Ubangi Savages Africa; Malaka - and Her Serpents, Two-Headed Girl; The Marvelous Pig Lady of London; LaTena’s Trained Wild Animals; Lentini 3 Legged Man; The Siamese Twins, Chang and Eng; Fiji Island Mermaid Captured Alive; The Lion King; El’Toro Crocodile Wrestler, Bingo the Human Chimp; Pigmy Tribe, Zelda the Half Girl; Capt. Cutter Knife Artiste, Zarof Fire Eater; Unis; Fat Fannie; and Chief Short Horn, Terror of the West. $850.

Here is a treat for your palate: Some of the favorite ways of preparing Booth's sardines... It turns out there are a whole lot of ways to prepare Booth's sardines. This is going to make your mouth water, but here are a few – sardine omelets, fried sardines, sardine salad, stuffed egg sardine salad, sardine stuffed pepper, and sardine loaf. Booth's sardines appear to have been born, and disappeared, in the first half the 20th century. Its producer, Monterey Packing & Fishing Co., became Pacific Fish Company, which apparently no longer exists either. Perhaps it was subsumed by another during the era of cannery consolidation in California. However, while Booth's no longer exists, I'm sure these recipes will be just as delicious if used with a different brand of sardines. $100.