27 Items for the RBMS Meeting from John Windle Antiquarian Bookseller 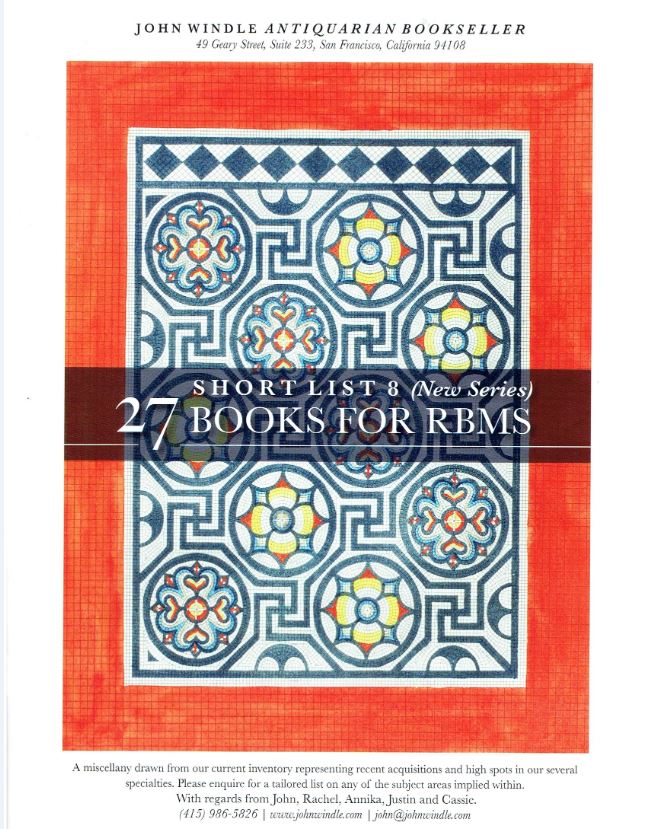 John Windle Antiquarian Bookseller has published Short List 8. 27 Books for RBMS. RBMS is the Rare Books and Manuscripts Section, part of the American Library Association. The RBMS recently held their annual conference. Windle offers a variety of material, often with an artistic bent, though not necessarily so. We won't try to cite a particular time period for what we find, since Windle has managed to find items ranging from 1477 to 2011 in just 27 pieces selected. So, we will just describe a few items that are somewhat representative of what you will find, but not entirely so. Some are simply not like the others. Here, now, are a few.

Cotton Mather was America's most notable pre-Revolutionary religious figure. He was a stern man, too willing to believe in witches at the time of the Salem witch trials. However, he wrote about other subjects as well, as in the case of this book: Magnalia Christi Americana: or, the Ecclesiastical History of New-England, from the First Planting in the Year 1620. Unto the Year of Our Lord 1698. Published in 1702, it covers much more than just church history. Instead, it is a complete history of what was going on in 17th century New England, from the time of the Pilgrims' landing in Plymouth. For Mather, church and secular history all blended together so he writes about the colony's governors and ministers, Harvard and miracles, provides puns and poems, and writes of the Salem witch trials. Windle notes that while "not entirely historically accurate," Mather's book "provides a garrulous overview of the state of society and manners in New England during the early colonial period." Item 18. Priced at $7,500.

No one outside of her natives even knew America existed when this book was published. Item 5 is a leaf from the first substantial book printed in England, The Canterbury Tales. This is the first printed edition of the English classic by Geoffrey Chaucer, written in the 14th century. The publisher was England's first printer, William Caxton. Caxton also printed the first book in the English language a few years earlier, but that was in Bruges, now part of Belgium. In 1476, he picked up his press and sailed across the channel to set up shop in England. This was his first significant publication, printed in 1477. The leaf here offered contains fragments from the first and second part of The Clerk's Tale. $9,500.

Next up is Charles Darwin's continuation of what he revealed a decade earlier in his Origin of Species, as applied specifically to humans. Item 10 is The Descent of Man... published in 1871. In it, Darwin makes the first use of a term that does not appear in the Origin - "evolution." He also makes an interesting, and ultimately correct observation on the geographical origin of humans. Darwin observed that living mammals are found in areas where there are closely related extinct species. Therefore, he concludes that in Africa, where there are apes, it is likely extinct species of gorillas and chimpanzees will be found. He continues, "...as these two species are now man's nearest allies, it is somewhat more probable that our early progenitors lived on the African continent than elsewhere." Offered is a first edition, first issue. $8,950.

Item 2 is a strange though important medical work, Experiments and Observations on the Gastric Juice, and the Physiology of Digestion, published in far northern Plattsburgh, New York, in 1833. The author was William Beaumont, an army physician who has been called the "Father of Gastric Physiology" for this study. However, the subject of the study was not Beaumont but one Alexis St. Martin. St. Martin was a French-Canadian trapper who suffered a close-up gunshot wound to the stomach. It was not in war, simply an accident, but Beaumont attended to him though St. Martin was not expected to live. The hole never completely healed, but Beaumont fashioned a flap of skin to cover it. He then proceeded to use that flap to peer inside and observe what was going on. Since St. Martin could not readily return to his work, he became Beaumont's assistant, affording regular observations. The physician performed such experiments as tying some food on a string, putting it in St. Martin's stomach, and pulling it out to observe what had happened. Beaumont also made observations on the effect of emotions on the gastric juices, a forerunner of Pavlov's later studies. As for poor M. St. Martin, he lived for another 50 years after his accident. $3,750.

Next up is another odd book, though in a very different way. The title is, The First Six Books of the Elements of Euclid in which Coloured Diagrams and Symbols are used instead of Letters for the Greater Ease of Learners, published in 1847. Rather than using letters to describe such things as lines and angles, author Oliver Byrne used different colors. He claimed, "It is based on the theory that by means of colour the Elements of Euclid can be acquired in less than one third the time usually employed." From looking at the pages, my guess is it would take three times as long, it being harder to follow, in my opinion, than letters. However, if Byrne did not create an easier way to learn geometry, he did create something that has been described as one of the most beautiful books of the century. Indeed, he has created "a unique riot of red, yellow and blue," in something that looks like a work of mathematical cubist art. I don't even like cubist art (or math books) but this is spectacular. Item 11. $19,500.