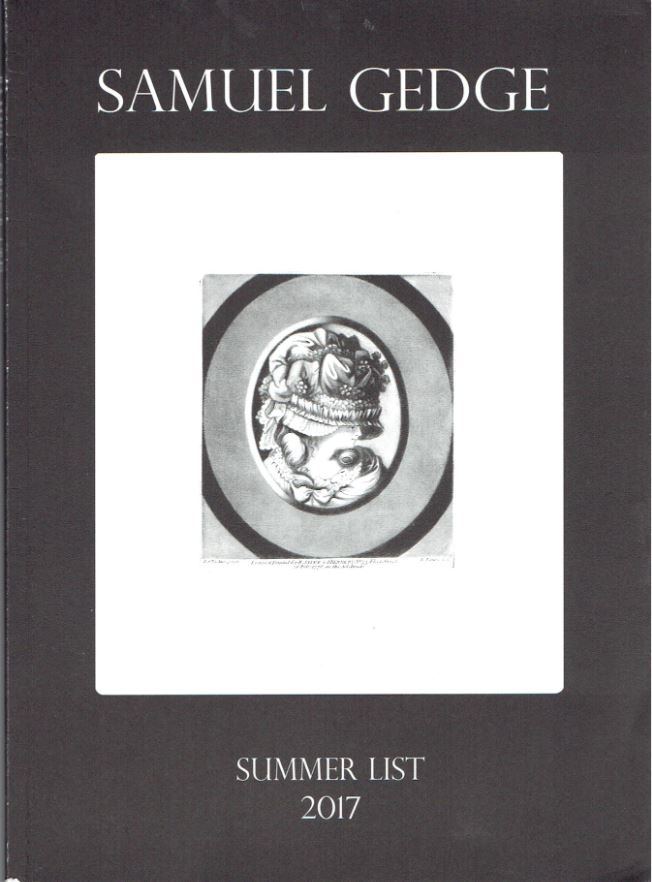 Samuel Gedge Ltd. has issued a Summer List of Books, Manuscripts & Ephemera. Gedge's material is mainly unusual and uncommon items from the early 19th century to way farther back. Many of the documents, broadsides, manuscripts and ephemeral items were unique when new, or are of such obscurity that there is likely no other known copy. Novels are mainly uncommon works once popular but which never achieved status as classics. One thing you can expect of a Gedge catalogue is you will find items you are unlikely to find elsewhere, or perhaps ever see again. Here are a few examples.

John Disney was no Walt. Fun and games were not his thing. He was a stern Anglican churchman at the beginning of the 18th century who was not pleased with the immorality he saw around him. In 1708, he published his thoughts in An Essay Upon the Execution of the Laws Against Immorality and Prophaneness. Disney was also a magistrate, and his book calls on those who enforce the laws to vigorously execute those involving immorality. Evidently, too many constables and sheriffs were lax on the enforcement of such laws, or courts did not sufficiently punish those who were guilty. Unrestrained public impieties, Disney warns, will "bring down the Vengeance of God upon the Land." He had a particular disdain for drunkenness, but seeks punishment for all sorts of sins, including gaming, "keeping Whores," and other debaucheries. Along with the destruction of society, Disney notes that unpunished immorality "...may in time clear the Way for the Return of Popery. Allow men in their Vices, and you make them hopeful Proselytes to Rome." If this were true, we would all be Catholics. For those wishing to visit this more traditional conception of Disneyland, this book (item 61) is yours for £750 (British pounds, or approximately $969 U.S. dollars).

Sticking to piety a little longer, item 218 is Sermons by the late Reverend John Logan... It was written, naturally, by Logan, though Logan died two years before its publication in 1790. Logan seems a bit more fun-loving than Disney (not that this would take much), but in Logan's case perhaps a bit too much. Logan was ordained in 1773 and had a role in revising works for the Church of Scotland from 1775-1781. He was evidently quite popular, having influential friends. He also had his weaknesses. Reportedly, he could suffer bouts of depression. He managed it with the bottle. Perhaps this was just an excuse for the drinking. He also got a young lady pregnant, possibly two (I am uncertain). They were not married. He found it wise to go off to London in 1781, where he published a book of poems and wrote some plays. One, Runnamede, was too political and libertarian and was banned in London. It did make it to the stage in Edinburgh. He has also been described as becoming a "hack journalist." Whatever his shortcomings, he still maintained his friends and was respected in some quarters. His sermons were published by his friends after his death and were quite popular. However, in the ultimate of posthumous insults, charges have been made that he stole some of his poems from a deceased friend, and some sermons were plagiarized from others. £650 (US $839).

Sadly, this place no longer exists, but back around 1850, it was Now Open!... C. Pollard's Splendid Museum of Mechanical Wax-Work Models as Large as Life! Item 211 is a broadside promoting the museum, which featured such exhibits as "Androcles, the Roman Slave, extracting a thorn from a Lion's Paw," "Finding Moses in the Bullrushes," "Last Moments of Napoleon," and a "Splendid Group of Chinese in Native Dresses." In the "Convicts Room" you could find James Bloomfield Rush, who assassinated a man and his son, and Manning and his wife, who were executed for murder. Both were sensational cases at the time, and Charles Dickens wrote an article about the Manning public hanging, decrying the wickedness of the levity of the crowd at such an occurrence. Mechanical wax models were fascinating to visitors, though their movements could more accurately be described as "wooden." £450 (US $581).

This next item comes from a man who is of some note, the title being St. Leon: a Tale of the Sixteenth Century, published in 1799. The author was William Godwin, and while he is not as famous as his wife (Mary Wollstonecraft – Vindication of the Rights of Woman) nor his daughter (Mary Shelley – Frankenstein), he was a noted anarchist political philosopher. His best known book is his biography of his wife, which was an honest look at her liberal lifestyle, but damaged her reputation for a century. St. Leon is a lengthy (four-volume) Gothic novel, mixing the supernatural with the philosophical. It is said to have been an influence on his daughter's famous book. Item 122. £1,750 (US $2,262).

Item 101 is a seven-page autograph letter from Thomas Brooke to John Blackburn, describing his tour of Holland in 1786. Brooke was a Member of Parliament for two decades, Blackburn an MP for almost 45 years. Brook describes the local inns, artworks, Dutch barge navigation, and dinner with a prince and a bishop. Describing the Dutch propensity for smoking, he comments, "...miserable must be the man who dislikes the fume of tobacco – every one smokes & I really think that it must preserve the health in this most damp country..." Probably not. £450 (US $581).