American Scenes and Views from the William Reese Company 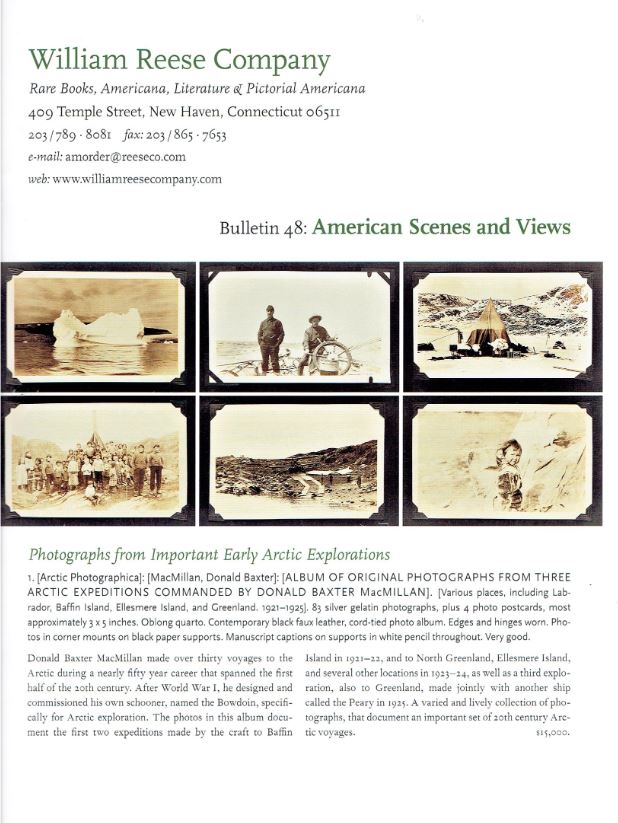 The William Reese Company has released their Bulletin 48: American Scenes and Views. This is a collection that lets the pictures do the talking. The items presented range from single prints to books notable for their scenic views to portraits of people or groups of people. Sometimes the images are beautiful, America's spectacular natural wonders, other times gruesome, such as battle photographs from the Civil War. Such is the world. Here are a few examples.

The 1830's brought the realization that the customs and traditions of America's natives in their original state would soon disappear due to the overpowering advance west of settlers and others from the east. Three notable books filled with illustrations of that fading history were generated from travels west by artists during that period. Reese has two of them. Perhaps the best illustrations of all came from Karl Bodmer, a German artist. He accompanied Prince Maximilian of Wied-Neuweid on a journey that lasted from 1832-1834. They traveled up the Missouri River as far as present-day Montana, visiting the Sioux, Mandan, Crow, Cree, and Blackfoot tribes. They spent the long North Dakota winter with the Mandan, not exactly typical living arrangements for a German prince. The visitors also stopped at other sites in America so there are illustrations from places such as Boston and New York, Lake Erie and Niagara Falls. Maximilian published his account of the journey in 1839-1841, with his text and Bodmer's numerous illustrations. The title is Reise in das Innere Nord-America in den Jahren 1832 bis 1834. Item 33. Priced at $450,000.

The second of these early western Indian accounts came from American artist George Catlin. Catlin set out west during the 1830's with the purpose of preserving the last remnants of traditional Indian life in illustrations. He too made a journey up the Missouri and came back with the illustrations that would come to be the focus of his life. He went on tour, including off to Europe, to display his drawings and describe what he saw to attentive audiences. Catlin described the Indian as an "honest, hospitable, faithful, brave, warlike, cruel, revengeful, relentless, - yet honourable, contemplative and religious being." He even brought a few natives along on some of his European tours for an even closer look at these people who must have appeared quite unusual to 19th century European eyes. It was during a tour of Europe that Catlin had this collection of illustrations published in London in 1844: Catlin's North American Indian Portfolio... It contains 25 hand-colored plates of Catlin's drawings. Item 9. $110,000.

One of the earliest looks at American Indians, back in the day when Virginia was as far west as anyone ventured, came from Theodor De Bry. Item 24 is the first German edition of De Bry's work on travels, this being the American part of his series, published in 1590: Wunderbarliche, Doch Warhafftige Erklarvng, Von der Gelegenheit vnd Sitten der Wilden in Virginia. De Bry did not visit America. The account came from Thomas Hariot's visit to the Roanoke Colony in 1585. The illustrations were taken from those of John White, who was Lieutenant Governor of the colony. This is likely the best illustrated look at America's natives until Maximilian and Bodmer's visit over two centuries later. This is a very rare copy in that it features contemporary hand coloring. $400,000.

Next up is a finely illustrated account of a journey to the American West in the middle of the 19th century. The title is Route from Liverpool to Great Salt Lake Valley... edited by James Linforth. However, it is not an account of Linforth's journey. The book covers a trip, but also contains information about Utah and the immigration of Mormons from Europe to Utah. This particular journey was that of Frederick Piercy, who beautifully drew images of various places he saw. He set out in 1853, arriving at New Orleans. He drew pictures on his arrival in New Orleans, Natchez, and then went up the Mississippi to draw the ruins of the earlier temple in Nauvoo, Illinois, and the jail in which Joseph Smith was killed. Other images include Council Bluffs, Fort Bridger, Laramie, Scotts Bluff, and scenes at his ultimate destination, Salt Lake. Piercy returned to Liverpool in 1855, the year in which this book was published. Item 31. $27,500.

Item 21 is the second volume (only) of the two-volume set regarded as the greatest photographic account of the Civil War – Gardner's Photographic Sketch Book of the War, published in 1865. Gardner, who trained under Matthew Brady, compiled this account of scenes from the war, from those of soldiers and equipment in the ready, to ruins and horrific outcome scenes of battle. These shots come from the latter part of the war, so we see Appomattox, a Confederate prison, and lastly a monument dedication at Bull Run. Gardner was a Union man, so Confederate scenes were depicted after the territory was taken by Union forces. $50,000.