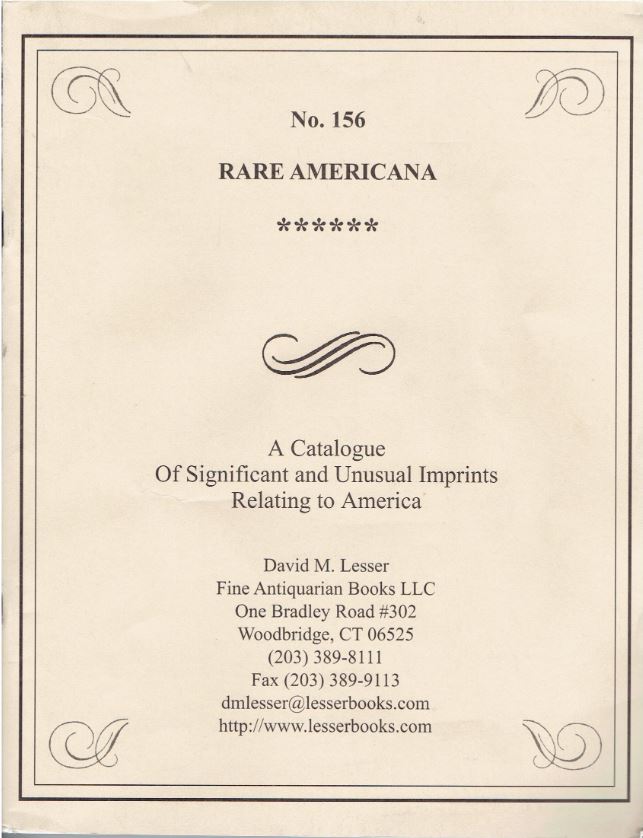 David M. Lesser Fine Antiquarian Books has released a new catalogue of Rare American, number 156 in their ongoing series. It follows the usual mold, some books, but more ephemeral sorts of paper, such as pamphlets, broadsides, manuscripts, brochures, photographs and other types of images. With a focus on historic Americana, material comes from the 18th, and more so, the 19th century. The variety of material offered makes this a sure source of interesting items for any collection of Americana. Here are a few samples.

This is a reminder of what was not one of America's better hours, and a stain on John Adams' mostly outstanding legacy. Item 34 is An Account of the Trial of Thomas Cooper, of Northumberland [Pennsylvania], on a Charge of Libel Against the President of the United States. That President was John Adams, and the statute under which Cooper was charged was the notorious Sedition Act. Cooper had emigrated to the United States from England in 1794, choosing to live near his friend, Joseph Priestley. Cooper was an anti-Federalist and supporter of Thomas Jefferson. He made his views known, resulting in the trial in 1800 described in this account (it was published for Cooper in 1800). Cooper's comments were within what today is normal political discourse, but Adams wished to silence serious criticism of his policies and activities. The trial was held in front of Supreme Court Justice Samuel Chase, a vehement Federalist supporter, not a good omen for Cooper. He demonstrated hostility toward the defendant. Chase would later be impeached by Jeffersonians in Congress but was not convicted in the Senate and so survived in office. Cooper, however, was convicted in his trial and sentenced to six months in prison. Nevertheless, that did not silence his continued criticism of Adams. Priced at $1,250.

Here is another unpleasant moment from American history. The South had much to be embarrassed about during the Civil War. It was not the bravery of Confederate soldiers that was bad, but the ugliness of the cause in which they had been enlisted – the preservation of slavery. That does not mean the North was all pure and good. Item 41 is the Report of the Committee of Merchants for the Relief of Colored People, Suffering from the Late Riots in the City of New York, published in 1863. These merchants were good people, but the same cannot be said for the rioters. They were displeased with new draft quotas issued in July 1863 for service in the Civil War. They took out their anger on the city's black population. This report notes that they were forcibly driven from their homes "by an infuriated mob, without cause or provocation." Many were murdered, "hanging on trees and lamp posts, and cruelly beaten and robbed." Names and manner of death are given for victims. The Colored Orphan Asylum was burned down. President Lincoln was forced to divert some troops from the war effort. Four days later, state and federal troops finally restored order. $850.

Enough for the bad and the ugly. Let's get to the good. Item 75 is likely one of the most notable eulogies ever given in American history: A Funeral Oration, on the Death of General Washington, Delivered in Philadelphia, at the Request of Congress. By Major General Henry Lee... published in 1800. Henry Lee, better known as "Light-Horse Harry," was a Revolutionary War comrade-in-arms of Washington and one of the men he trusted and respected most. During the Whiskey Rebellion of 1794, it was Lee that Washington assigned the task of quelling the rebellion. Congress unanimously selected Lee, who by then was a congressman from Virginia, to offer the eulogy. It was during this oration that Lee uttered the words about Washington still remembered today – "first in war, first in peace, and first in the hearts of his countrymen." Ironically, it was Light-Horse Harry's son, Robert, who led Confederate troops in the attempt to tear apart the nation Washington built six decades later. $3,000.

Here is an account of some intrigue, likely from 1812, along with some "fake news" that had a gullible President Madison fooled. Sometimes you believe what you want to believe. Item 60 is Facts Relative to John Henry and his Negociation. Henry was a U.S. Army officer who hired himself out as an agent to the Canadian Governor. The Governor wished to find out whether New England might secede. Federalists in New England were resentful of southern power in the United States, with some of the more radical among them interested in secession and possible reunion with Britain. There was correspondence between Henry and the Governor concerning his mission. Unfortunately for Henry, the Governor died before he was paid, and the British (who appointed the Canadian Governor at this time) refused to pay. At the suggestion of a Frenchman, Henry decided to sell the correspondence to President Madison. Madison was ready for war with Britain, and such a mission by Britain through its Canadian colony to split the nation played into his beliefs about their trickery. Madison payed $50,000 for the papers. However, the letters Henry sold Madison were fake. The President, in his desire for an excuse for war, was tricked into paying a large sum of money for the fakes. Henry took the money and ran... off to France. This pamphlet explains the story in greater detail. $850.

Item 97 is a circa 1880's broadside advertising "The Kaatsberg," Robert Elliott, Proprietor. Hunter, Greene Co. N. Y. It is an "attractive and well-arranged summer resort" near a railroad terminus. That would evidently require a transfer since it was necessary to cross the Hudson River by ferry at Rhinebeck. The Kaatsberg was one of many resorts that opened in the area in 1882 when the railroad line was completed. It offered a bathing house and accommodations for 100. However, Elliott does make one stipulation about his visitors – "NO JEWS." Leaving aside the ethical considerations, one wonders about the business acumen of a proprietor opening a resort in the Catskills and saying "no Jews." $375.