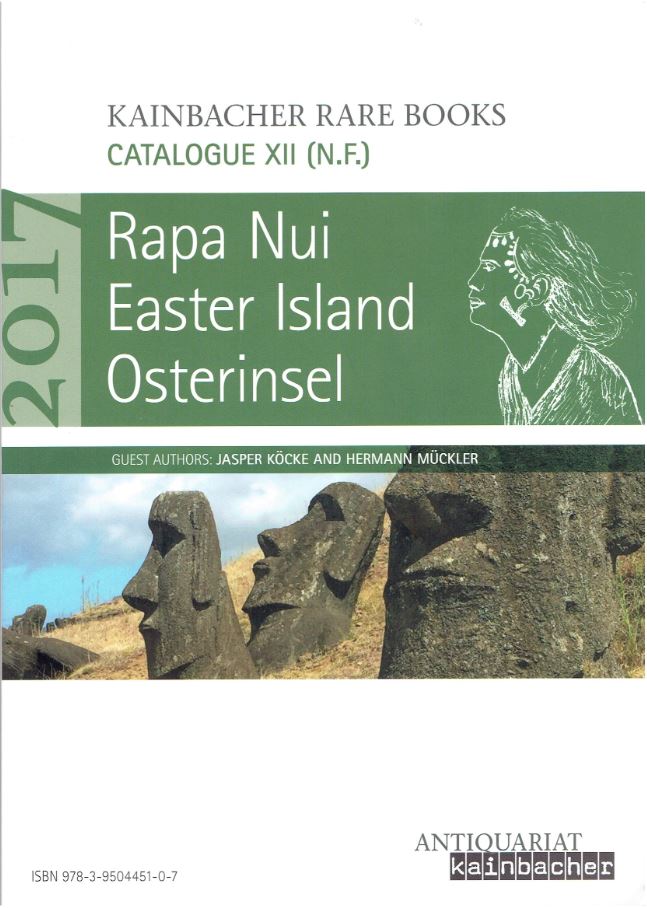 Kainbacher Rare Books has issued their Catalogue XII, Rapa Nui, Easter Island, Osterinsel. Those are all names for the same place, the Pacific Island now part of Chile over 1,000 miles from anywhere else. Most in the West still know it as Easter Island, which is in turn famous for its giant stone statues of heads (moai). There are hundreds of them on the island, their purpose long a mystery.

Easter Island is believed to have been settled about 1,000-1,500 years ago, most likely by very skillful seafaring Polynesians. What led them to make this long journey in their primitive boats is unknown. It is believed several hundred years later, or about 500 years before first visited by Europeans, they began carving and then moving these enormously heavy stone heads to various places on the island. They appear to be representatives of ancestors, whom the islanders believed looked out for their interests from above. It looks to have been an idyllic place, beautiful forests, numerous native animals, and a peaceful community.

Unfortunately, by around 1500, the population rising to 15,000, the island could no longer sustain such a large population. The people stopped looking to ancestors so much but to the strongest members of society, selected through competitions. The forests disappeared, food became less plentiful, life was not quite so beautiful. Still, they lived a peaceful existence when the island was first discovered by Europeans in 1722. The first Europeans to arrive were led by Dutch navigator Jacob Roggeveen. He landed on Easter Day, hence the island's name. No one returned until a Spanish visit in 1770, followed by Captain James Cook's visit during the second of his three voyages, in 1774. Cook said the island was nothing like the one Roggeveen had described half a century earlier. Natives were few, water scarce, food probably only enough for those who lived there, not for visitors. Cook noted that by then, some of the statues had been toppled. There was fighting going on between clans as inhabitants battled for scarce resources. Paradise was deteriorating rapidly.

There would be several visits over the next century as the situation continued to decline. Then, the visitors made the bad situation much worse. In 1862, Peruvian slave traders struck, abducting 1,500 people, half of the island's remaining population. Then, the missionaries came. They were well-meaning, but wiped out most of the natives' culture and buried their history. They were taught to be European Christians, not Rapa Nui people. The slavers were later forced to repatriate surviving abductees, but they brought back smallpox and other diseases with them, wiping out large sections of the remaining population. Missionaries evacuated some of the survivors to Tahiti, and at the low point, only 111 people remained. The island has since rebuilt its population, but many are immigrants, the culture totally changed.

Kainbacher's catalogue is not at all what you normally expect from a bookseller. It contains four sections, three being guest articles pertaining to Easter Island presented by scholars. Only the second section offers books for purchase. These are historic accounts from the various visits by Europeans, Chileans and Americans who came to the island between 1722 and the early 20th century. These are critical works to forming a collection about this isolated, wondrous place whose giant stone heads have made it famous throughout the world, despite its small size and extreme isolation. Here are a few samples.

Carl Friedrich Behrens was the first European to set foot on Easter Island. He came with Roggeveen's expedition, which was searching for Terra Australis, the imagined great southern continent, or Davis Land for a sailor who thought he spotted its edge. Behrens was a corporal, in charge of the soldiers on the expedition, taken along to protect the others. In 1737, he published an account of the journey, which includes a section on their visit to Easter Island. Their visit was brief, and Roggeveen apparently never stepped on the island himself, but Behrens provides us with an interesting account of the people and their customs, as best he could understand them since they did not speak the same language. Several islanders were killed by the Dutch, either by accident or misunderstanding, but while that made them more nervous, the Rapa Nui remained friendly to their guests. It would be almost half a century before they had any more. Offered is a copy of the 1739 French translation entitled Histoire de L'Expédition de Trois Vaisseaux. Priced at €11,500 (euros, or about $12,868 in U.S. currency).

Next we have Reise um die Welt, an account of Cook's second voyage, by Georg Forster, the German edition published 1778-1780. Forster, and his father Johann Reinhold Forster, were naturalists on Cook's second expedition. They were among those on the voyage who went ashore to explore Easter Island. The Forsters spent around a week on the island, and inquired of the natives what the stone statues were. They guessed them to be monuments to some kings. Forster noted that they must be remnants of better times. €5,500 (US $6,155).

The United States finally got around to conducting an exploration of Easter Island in 1886. Under prodding from the Smithsonian, the Navy sent the ship Mohican to Easter Island, a warship that was plying Pacific waters to protect American interests. She spent a month there gathering information. This catalogue offers three reports on this expedition, including Te Pito te Henua. Known as Rapa Nui; Commonly Called Easter Island... by George H. Cooke, published in 1897. Cooke was the surgeon on the Mohican. €900 (US $1,007).

Walter Knoche was sent to Easter Island by Chile, which now controlled the territory, in 1911 to set up a meteorological and seismic monitoring station. He spent time learning what he could about the island and its culture. Fortunately, he was able to find two elderly residents who could recall times before the missionaries arrived in 1864. From them he was able to learn about traditional religious rites, myths, music and dance, and other native customs. It was a last chance to record old traditions that had been driven away when the country became Christian. His book, not published until 1925, is titled Die Osterinsel. €9,500 (US $10,631).

Three years after Knoche, Katherine Routledge and her husband landed on the island. They were sailing in a private yacht but holed up on Easter Island for 15 months to avoid sailing home through the dangers of sea battles during the First World War. Mrs. Routledge thoroughly researched the island and wrote about it in this book, The Mystery of Easter Island. The Story of an Expedition, published in 1919. Though only three years behind Knoche, both of the old-timers he interviewed had since died. However, she found some older residents in a leper colony still had tattoos, later suppressed by the missionaries, that corresponded to designs carved on the backs of some of the statues. She was able to record some of the passed down oral accounts of pre-missionary times even though the living witnesses were now gone. €750 (US $839).