Science, Medicine, and Natural History from Jonathan A. Hill Bookseller 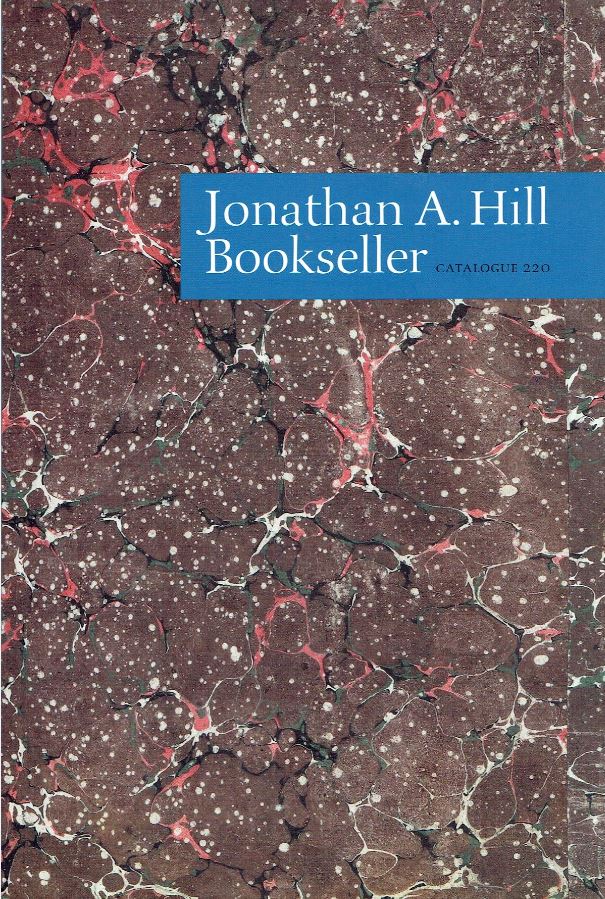 Jonathan A. Hill Bookseller has published a catalogue of Recent Acquisitions in Science, Medicine, and Natural History. The acquisitions are recent, the books not. These are mostly very old books, some dating back as far as the 16th century. Much of the science is not entirely accurate, updated by centuries of new developments. The medical practices would be a disaster if taken seriously today. There are good reasons most people didn't live past their 30's in those days and some are displayed here. However, in fairness, medicine was just emerging from over a thousand years of stagnation, nothing much new having been learned since Roman times. These books provide a fascinating look at science and medicine as it developed from primitive to advanced on the shoulders of many great thinkers. Here are a few examples.

We begin with someone who did get it right, although it took almost two millennia before his theory received much serious consideration. Aristarchus of Samos was a Greek astronomer and mathematician who lived in the third century BC. He proposed a heliocentric world, one with the sun at the center, the earth and other planets revolving around it. He also theorized that stars were really other suns, just at a far greater distance. Aristarchus also tried to estimate the relative distances of the sun and moon from earth, but substantially underestimated how much farther away the sun is. While Aristarchus managed some followers, the great minds of the ancient world, Plato, Aristotle, and Ptolemy, rejected his theory, opting for the geocentric universe which common sense seemed to dictate. However, if not accepted, it does not appear that it resulted in any great controversy or condemnation of the theorist. When Copernicus revived the theory 18 centuries later, and particularly when Galileo promoted it after 19 centuries, it resulted in his persecution by church authorities as being heretical. Item 4 is Aristarchus' De Magnitudinibus, et Distantis Solis, et Lunae... the first edition of Commandino's translation published in 1572. Priced at $37,500.

Speaking of Mr. Galilei, item 31 is a 1619 first edition of Galileo's Discorso delle Comete... a discourse on three comets that appeared in 1618. It was attributed to his student, Mario Guiducci, but few were fooled by who was its actual writer, including the Jesuit Father Orazio Grassi, to whose theory it was a biting response. Grassi had postulated that comets traveled between the sun and moon, not a correct theory, but then again, Galileo didn't offer much of an alternative. The book is more focused on what was wrong with Grassi's theory than on what comets actually were. Galileo questioned whether they were even real, speculating that they were more of an optical illusion, like rainbows, which would, of course, make an attempt to place their location fruitless. Grassi was offended by Galileo's sharp reply, and published an answer (also "anonymously" attributing it to a student), which in turn led to another Galileo reply, his well-known book Il Sagiatore (The Assayer). This latter book is more a discussion of how one should reach scientific conclusions rather than a continuing debate on the nature of comets. $40,000.

Item 69 is one of those lengthy titles more common among books centuries ago: Miscellaneous discourses concerning the dissolution and changes of the world : Wherein the primitive chaos and creation, the general deluge, fountains, formed stones, sea-shells found in the earth, subterraneous trees, mountains, earthquakes, vulcanoes, the universal conflagration and future state, are largely discussed and examined. Published in 1692, the author was John Ray, an English naturalist and botanist. Ray is well regarded for his early studies of plants and the classification of them, basing the latter on similarities between species. While a scientist, Ray was still a believer in the Bible as historical fact, and in this book he explains the existence of various geological features, notably the existence of fossil sea shells in places where they don't belong, consistently with the stories of the Bible. Ray believed fossils were the remains of once living organisms, but that their unexpected distribution could be explained by changes in the earth. The flood of Noah was one possible explanation for their locations. Being quite familiar with classification of plants and animals, Ray was cognizant that some fossils were from species unknown to man. Species becoming extinct would seem out of place with God's plan (why would He have created them in the first place?), but Ray argued that these species might exist somewhere but had not yet been discovered by man. This copy of Ray's book comes in an exquisitely gilt tooled red morocco binding and is in exceptional condition. $15,000.

Here is another long title (we have only reproduced part of it), a vitriolic attack on urine testing: The Anatomie of Urines. Containing the Conviction and Condemnation of them. Or, the second Part of our discourse of urines. Detecting and unfolding the manifold falshoods and abuses committed by the vulgar sort of Practitioners in the judgement of diseases by the urines onely... Urine testing is a common practice today used by doctors in assessing health factors of their patients. What made 17th century physician James Hart attack the procedure so strenuously? The problem was that urine testers of the day frequently used this as the sole means of assessing a person's health, or lack thereof, often using it as a replacement for physicians, such as Dr. Hart. While useful, urine testing is hardly a substitute for actually examining a patient. Hart exposes the fallacies of urine examination by ignorant people, noting three types of such persons in particular, unlicensed quacks, meddlesome old women, and in particular, clergymen. Item 39. $5,000.

Item 5 is a "beautifully illustrated" treatise on artificial limbs. The author/inventor was Pierre Ballif, surprisingly, a dentist from Berlin. Published in 1818, the title is Description d'une Main et d'une Jambe artificielles inventées par Pierre Ballif... (description of an artificial hand and leg invented by Pierre Ballif). Up to this time, existing artificial hands could not be operated separately. Lifting the arm, or closing the fingers had to be done with the other hand. Ballif's mechanical arm was attached to the stump and the shoulder by a harness. Gut strings and springs within the artificial limb enabled the wearer to manipulate the hand and arm independently. $5,000.