A Summer Miscellany from The Brick Row Book Shop 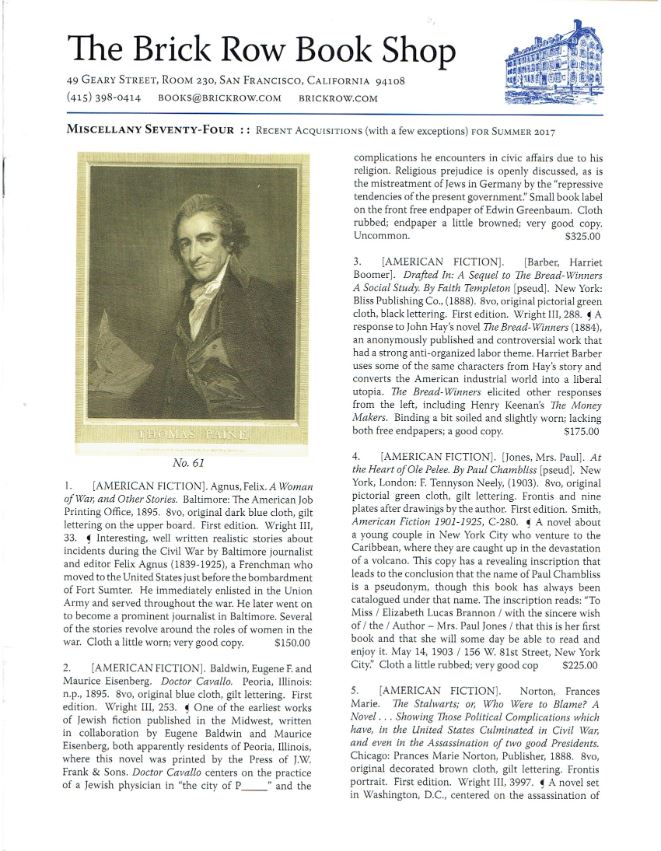 The Brick Row Book Shop has issued their Miscellany Seventy-Four: Recent Acquisitions (with a few exceptions) for Summer 2017. There's not much you can say to describe a "miscellany" beyond all that is said in that one word. We do note a fair amount of literature here, old novels and collections of poetry, often by rather obscure (at least to me) writers. American and English literature are offered the most. The dates are old, primarily 18th and 19th century, with a few items extending to both sides of that timeline. Here are a few selections from this catalogue of varied material.

We begin with what is certainly an unusual novel, obscure today, by a woman whose name you probably do not recognize – Frances Marie Norton. For those who believe conspiracy theories are something new, this 1888 book will reassure you they are not. The title is The Stalwarts; or, Who Were to Blame? It is described as a novel, but the fictionalized names represent real people. The long title speaks about political activities that resulted in the Civil War and the "assassination of two good presidents." Lincoln was the first, Garfield the second. What makes this book interesting is who the author, Mrs. Norton, was. She was the sister of Charles Guiteau, the man who assassinated Garfield. She maintains that her brother was crazy, had been that way from birth, but that he was unknowingly used by others who wanted to do away with Garfield, including the Stalwarts, a faction of the Republican Party, and various Wall Street and other powerful people. She said she was writing this book to warn people of the "near approach to anarchy and a military dictatorship, the sure precurser [sic] of a fallen republic and an established monarchy..." Fortunately, Mrs. Norton's warnings must have been heeded as we do not have a monarchy... at least not yet. Item 5. Priced at $275.

Here is another oddity. Item 13 is Poems, on Various Subjects, by Isabella Oliver, published in 1805. Ms. Oliver was a resident of Carlisle, Pennsylvania, who was not a full-time poet. Rather, she would write her poems while "engaged in the common business of life," such as performing household chores, going for a walk, or running errands. She didn't literally write them. Ms. Oliver did not have a formal education so she did not know how to write. Instead, she would commit her poems to memory and dictate them later on to someone else to put on paper. Published in 1805, poems cover topics of the day, such as the death of Washington and the duel between Alexander Hamilton and Aaron Burr. There is also a nine-page poem on the evils of slavery, which is interesting as this was well before the development of a serious abolition movement in America, though the northern states were eliminating it at the time. $700.

This broadside from 1793 exploited an opportunity for the English to do what they most enjoyed doing for many centuries – condemning the French. The two were at each other's throats for ages, either as rivals or enemies. The French Revolution made the powerful in England especially paranoid as they didn't like all this democracy and equality stuff. It is doubtful they shed many tears when that revolution turned from high principles to outright butchery. Item 26 is a broadside headed Massacre of the French King! It continues, View of La Guillotine; or the Modern Beheading Machine, at Paris. It then translates the Decree of the National Convention ordering the execution and provides a description of the execution itself. The broadside also features an illustration of the execution. It shows King Louis XVI lying on a bench, his neck beneath the guillotine, waiting for the blade to drop. $3,500.

We've seen some unusual people already in this catalogue, but none came even close to being as strange at Theophilus Ransom Gates. Item 14 is a small archive that offers a once-in-a-lifetime opportunity to collect some rare remnants of the life of the man who became known as "Theophilus the Battle Axe." Gates grew up in Connecticut but moved to New York State as a young man. He became a teacher and then an itinerant preacher. He had had some sort of visions as a boy that he wished to share. He moved to Philadelphia and there began publishing a newspaper entitled The Reformer. This archive includes three letters from Gates, four manuscript receipts in Gates' hand, and a printed prospectus for the paper dated 1823. The material comes from the 1820's. The Reformer was designed to attack organized religion, which he saw as seeking to take over the country for its own purposes. He believed it incompatible with the spirit and principles of the Gospel. In the 1830's, Gates moved to the countryside, to an area of Chester County he called "Free Love Valley." Gates believed in free love and lots of nudity, like the Garden of Eden. He gathered a group of a few dozen followers who must have had lots of fun in the name of God. Quoting from Jeremiah, he called on his followers to be battle axes fighting for the Lord. Hence, his followers became known as "Battle Axes" and Gates obtained his moniker "Theophilus the Battle Axe." Not surprisingly, they were not particularly popular with their more conservative neighbors, but the group persisted until Gates died in 1846 and a few years later before drifting away. $2,500.

Item 45 is one of the more controversial biographies, one that unintentionally damaged the reputation of its subject for a century. The writer was William Godwin, the subject his wife, Mary Wollstonecraft. The title is Memoirs of the Author of Vindication of the Rights of Woman, published in 1798. Wollstonecraft was the author of this feminist book, but she died in childbirth in 1797. That child was to become Mary Shelley, wife of poet Percy Shelley and author of Frankenstein. Mary Wollstonecraft might not quite have been into free love like the Battle Axes, but she was a libertine by 18th century standards, veteran of a couple of affairs and mother of an out-of-wedlock child when she married the political radical Godwin. Godwin was forthright and honest in describing his wife's life in this biography. He thought it a positive, displaying her feminism and belief in human rights, but for the century of prudishness that followed, it tarnished her reputation, minimizing her contributions to women's rights. $3,250.