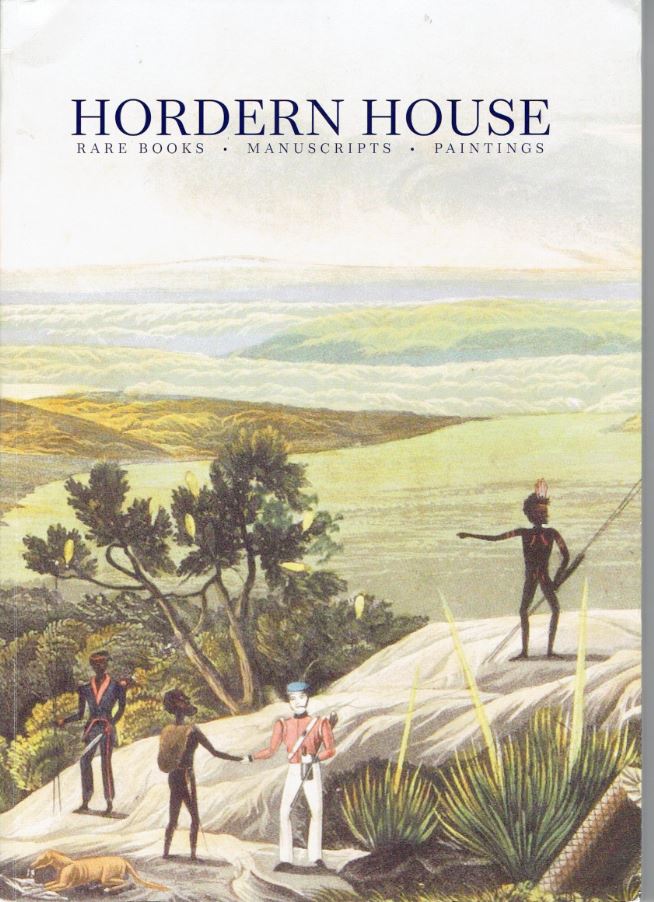 Hordern House has issued a new catalogue, and since it has no title, we will just say it is their latest. It is a thick catalogue though containing only 52 items. Obviously, each one is thoroughly described and illustrated. Most have ties to Hordern House's homeland of Australia, and go back to its early days, when discoveries were being made, transported prisoners arriving, and early settlers began making it their home. Travels are focused mostly on coastlines of Australia and nearby islands when this was the last continent (outside of Antarctica) to be seriously explored. Here are a few of the items you will find.

We begin with the oldest item in the catalogue, one that goes back to the beginning days of Australia. It is the rare 11th of 14 Memorials of Pedro Fernandez de Quiros, a Portuguese seaman who sailed on behalf of Spain. He was searching for the land known as Terra Australis, a great southern continent many believed must exist. Its existence had been imagined going back to the days of Aristotle, the belief being there must be a huge southern continent to balance the greater known land masses in the northern hemisphere. There was a certain logic to the theory though, of course, it was wrong. Quiros had led an exploration of the southern Pacific in 1605-1606 and thought he had finally discovered the mythical southern continent. He named it Austrialia del Espiritu Santo, the extra "i" in "Australia" to make it sound like Austria, Spanish King Philip III's heritage. What he actually found was the island of Espiritu Santo, Quiros obviously not having sailed around it. Quiros returned home and began petitioning the King to finance another mission, this time to settle the southern continent. King Philip delayed and demurred, putting Quiros off again and again without ever saying "no." This is how there came to be 14 Memorials. In this 11th Memorial of 1611, Quiros notes that he had been waiting 50 months for an answer and continues to plead his case. Quiros was not regarded as a serious explorer by the Spanish, eventually being sent to Peru, but he died on that voyage, his dream unfulfilled. It would be for Cook and later explorers to find the smaller continent now known as Australia and realize there is no southern continent of the size once imagined. Item 42. Priced at AU $275,000 (Australian dollars, or approximately $208,330 U.S. dollars).

The lightly settled west coast of Australia was visited by the Dutch in the 17th century (they called it "New Holland"), but no attempt at settlement was made until the British came to the east coast in the 1780's. They colonized it to serve as a prison camp. Still, no one really understood the full boundaries of the continent until the voyages of Matthew Flinders, who performed the first circumnavigation of the continent on his third and final voyage. On his return home from that, Flinders was forced to stop at Mauritius, a French island, for repairs. France and England were at war, so the French governor would not allow him to leave for six years. Flinders used the time to write this detailed description of his journeys and discoveries. It was published in 1814 under the title A Voyage to Terra Australis... Flinders never got to see the three volume set as he died earlier that year, never fully recovering from his prolonged stay as a French guest. It was Flinders who recommended that the continent, partly known as New Holland, partly as New South Wales, be called "Australia." Item 24. AU $87,500 (US $66,275).

Next is a great rarity and one of the few early color plates books about Australia: An Account of the State of Agriculture & Grazing in New South Wales... This is James Atkinson's account of farming in Australia, published 1826. This is a copy of the special issue and contains the extra large folding map and colored panoramic view of Sydney, expensive additions (the book was sold both with and without the extras). The book is both a guide to farming in Australia and a description of practices being employed. As well, it is a very attractive book featuring fine aquatint illustrations and a folding frontispiece view of Sydney. Item 4. AU $38,500 (US $ 29,157).

Not all was as pastoral in early Australia as that book may make it look. Martha Bailey was an 11-year-old orphan in 1827. At that young age, she was indentured out as an apprentice/servant to James Shepherd of Kissing Point. Her term was seven years or until lawfully married (with the consent of the trustees of the orphanage). Item 6 is a printed leaf, blanks filled in with manuscript, boldly headed This Indenture, which sealed young Martha's fate for the next seven years. It is signed by the trustees of the Female Orphan School, some of the most notable clergymen of the time, along with Mr. Shepherd. Ms. Bailey hasn't signed, but she would have had little choice anyway. Item 6. AU $3,350 (US $2,537).

This book has no Australia connection other than it being about seafaring, and so much of early Australiana is based on voyages. It is an epic poem by seaman William Falconer, entitled The Shipwreck. It was originally published in 1762, though this is an 1804 large paper edition believed to have been bound by Edwards of Halifax. This tale of a shipwreck was semi-autobiographical for Falconer as it is based on the wreck of a merchant ship on which he was a crewman. He was one of but three survivors. In 1769, he was less fortunate, being lost in a shipwreck near the Cape of Good Hope. Item 23. AU $2,750 (US $2,084).