The Southwest, North and South of the Border, from Almagre Books 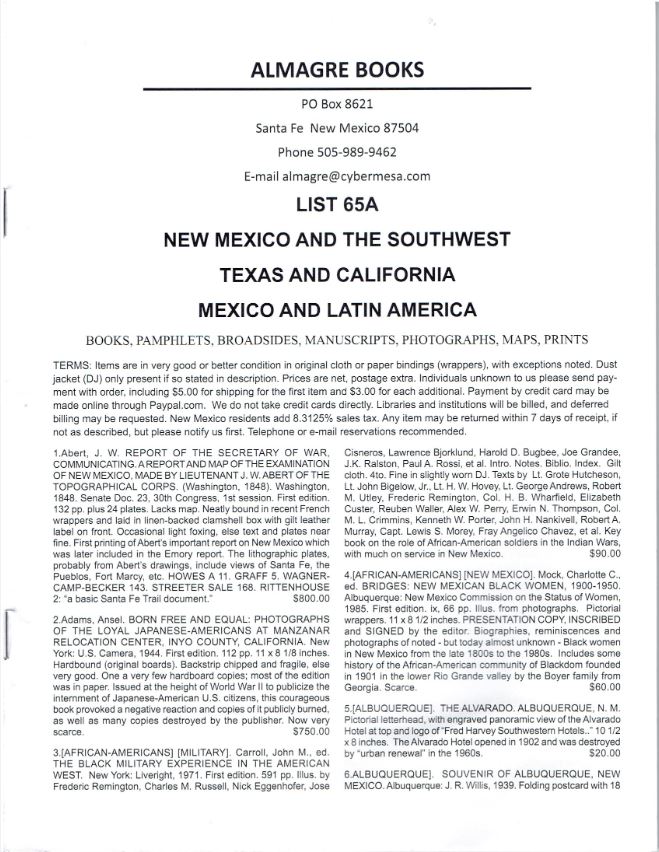 The Southwest and more.

Almagre Books has issued a catalogue of New Mexico and the Southwest, Texas and California, Mexico and Latin America. The subheading notes that it contains "books, pamphlets, broadsides, manuscripts, photographs, maps, prints." In other words, everything about the Southwest, both sides of the border included. Most of the material is either from or about the 19th and early 20th century. In it, you will meet cowboys, Indians, trappers, soldiers, lawmen, politicians, criminals, traders, ranchers, travelers, and those quiet people who had the greatest impact – settlers. This is an exciting selection of over 600 items for those who are fascinated by the Old West. Here are a few of them.

We begin with what is technically not a Southwest book, and yet it was essential to the existence of an American Southwest. The title, in French, is Histoire de la Louisiane et de la cession de cette colonie aux États-Unis de l'Amérique septentrionale, published in 1829. The author was Francois de Barbé-Marbois, who was the French negotiator of the Louisiana Purchase. This is his account of the sale that doubled the size of the United States, and created a new, long border with Mexico. That border proved too enticing to President Polk a decade and a half later to resist. He invaded Mexico and seized a large swath of adjacent territory. Call it Manifest Destiny. So was the American Southwest born. Item 79. Priced at $1,150.

While the Mexican War brought a large chunk of Mexico to the United States, the Civil War led to a fair number of Americans wanting to move to Mexico. A significant number of Southerners considered moving to Mexico after the Union defeated the Confederacy, fearing reprisals or simply not wanting to live in a reconstructed South. Some found support from the temporary, French imposed government of Emperor Maxmilian, others rejection. Ultimately, none of the colonies of Americans came to serious fruition. Item 135 is a Senate report, Message of the President Communicating...Information in Regards to Plans to Induce Immigration of Dissatisfied Citizens of the United States to Mexico, and Especially in Regard to the Plans of Dr. William M. Gwin and M. F. Maury, published in 1866. $125.

Another American expansionist was William Seward, a senator and later President Lincoln's Secretary of State. He is most famous for what was at the time called "Seward's Folly," the purchase of Alaska from Russia. For $7.2 million, America added 586,000 square miles of land, and a lot of oil, to its inventory. While Alaska was Seward's only purchase, he attempted to buy other territories, particularly in the Caribbean. Therefore, it is something of a surprise to see opposition to a purchase of Cuba expressed by Seward in this Thirty Million Bill Speech of William H. Seward. In the Senate of the United States, January 24, 1859. Indeed, Seward attempted to buy Cuba later. Nor was the price too high, even if this wouldn't have been the steal that was the Alaska Purchase. The issue was the timing. This was two years before the beginning of the Civil War, and the Cuba purchase was promoted by Southerners who wished to bring Cuba into the nation as a slave state. The abolitionist Seward wanted no part of that. After the war, when slavery was no longer a factor, Seward unsuccessfully sought to purchase Cuba. Item 161. $250.

Item 236 is a collection of nine "Wanted" posters from Texas, circa 1900-1912. Some contain rewards. Crimes charged included murder, armed robbery, army desertion, embezzlement, rape, burglary, selling whiskey on Sunday, and just being "a regular crook." Descriptions are provided for the scofflaws, such as for Joe Lightfoot (alias Claud Skipper). He "...don't talk much, can hardly get him into a conversation, has a tattoo of a woman's head said to be on left arm, and usually wears rubber stockings, something being the matter with his legs below the knees, caused from being shot in the legs..." $1,450.

Item 493 is an eight-panel brochure with photographs promoting Roswell, New Mexico. It is from the 1930's, and I can't imagine what Roswell was boosting at the time. Today, everything in Roswell promotes the 1947 landing of space aliens in the area, those small, wide-eyed creatures whose arrival the government covered up for years. At least, that's how the story goes, and Roswell plays it up to the hilt. What the city's claim to fame was before the flying saucer appeared is as much a mystery to me as those little space aliens themselves. $20.

Are you looking for a surefire way to make a fortune? No, the one-word answer isn't "plastics." It's "frogs." Item 180 is A Fortune in Frogs. It was published in 1934 by the repulsive sounding American Frog Canning Company. They can easily be raised in your backyard. Riches await. "Demand exceeds supply. New York and Chicago alone use over one hundred million (100,000,000) frogs a year..." What do they use them for? Seriously, did New Yorkers and Chicagoans consume 200 million frog legs a year in 1934? Did they not eat anything else? Were there McFrogs and Frog Legs Kings on every corner? The American Frog Canning Co. was run by Albert Broel out of New Orleans, and I suspect he is the only one who ever made any money from this scheme, he by selling instructions on frog farming. In 1936, Broel had to agree to a stipulation with the Federal Trade Commission that many of his claims were either incorrect or not supported by evidence, and I can't find any evidence of the company continuing in business by the 1940's. Evidently, tastes in New York and Chicago changed. $90.