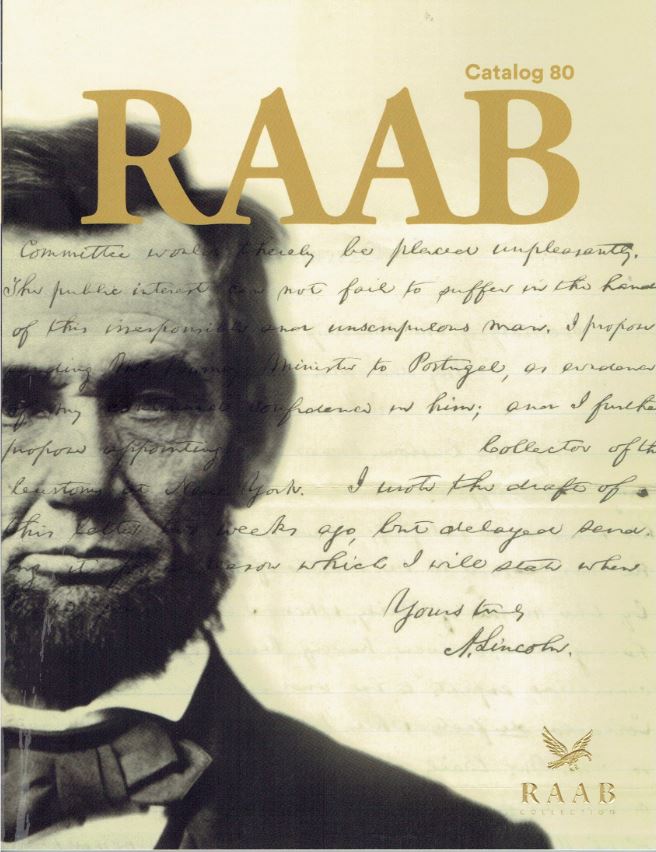 Autographed documents from the Raab Collection.

The Raab Collection has released their Catalog 80 of autographed documents. This is absolutely top of the line material when it comes to autograph collecting. Not only is every person who signed these papers well-known and important in history, but many of the documents themselves are of major significance. This catalogue is a history lesson too as Raab not only thoroughly describes what they sell, but places each item in its historical context. While most of these signatures come from Americans, there are a few others as well, such as Churchill, Gandhi, Monet, Marie Curie, and King George VI. Here are a few selections.

This looks like a significant piece of Americana with which to start the list. How about a 1776 signed letter from George Washington a few months before the Declaration of Independence to officials in New York, asking them to stop local merchants from trading with British military ships in the harbor? Item 1 is just such a letter, an urgent entreaty from the leader of the American troops. Writes Washington most convincingly, "We are to consider ourselves either in a state of Peace or War with Great Britain. If the former why are our Ports shut up – Our Trade destroyed – Our property seized – Our Towns burnt, and our worthy and valuable Citizens led into Captivity & suffering the most cruel hardships? If the latter, my imagination is not fertile enough to suggest a reason in support of the intercourse..." New York's Committee of Safety saw the irrefutable logic of Washington's entreaty and promised to stop the trade and cooperate with Washington in every way possible. Priced at $170,000.

Albert Einstein did not talk much about religion, though there were those who wanted to know what the world's presumptive smartest person's theological beliefs were. He certainly did not believe in anything resembling a traditional biblical version of God, though he did understand that the universe was tightly ruled by immutable laws, while a random universe, he thought, would act randomly. In 1945, he received a letter from Ensign Guy Raner, who wrote Einstein that an officer told him Einstein converted from atheism to theism based on the syllogism presented him by a Jesuit priest. It says that the universe is a design, a design requires a designer, therefore there must be a designer (God). First, Einstein angrily refutes the claim of his conversion, saying "I have never talked to a Jesuit priest in my life..." He then goes on to say, interestingly, "From the viewpoint of a Jesuit priest I am, of course, and have always been an atheist." However, he does not call himself an atheist. In an obvious comment about the traditional biblical image of God as a being with human-like thoughts and emotions, he describes "anthropomorphical concepts in dealing with things outside the human sphere" as "childish analogies." As for the order in the universe, he says, "We have to admire in humility the beautiful harmony of the structure of this world – as far as we can grasp it. And that is all." Understanding the order of the universe, or some might say understanding the nature of God, is above even Einstein's intelligence. Item 9. $75,000.

This next letter was not supposed to be a theological treatise, though its subject was based on a belief still quite controversial then (and to some extent now) in religious circles. President Theodore Roosevelt wrote this letter to noted naturalist John Burroughs in 1906. Roosevelt was quite a naturalist in his own right, dedicated to preserving the nation's natural history through its national parks. The letter is a discussion of animals and the development of their features. He talks about human development of intellectual capabilities, which "...have developed from ancestors which in the immemorial past possessed only such mental attributes as a mollusk or crustacean of today possesses." Considering that the Scopes Monkey Trial was still 20 years in the future at this time, many would have found Roosevelt's evolutionary beliefs heretical. He goes on to say that higher animals such as apes or even dogs, while still far less developed than the lowest man, display "...intellectual traits and (if I may use the word very loosely) moral or ethical traits, which represent embryonic or rudimentary forms of such intellectual and moral traits of our own..." Item 4. $15,000.

Next we have a remarkable letter from Thomas Jefferson, written in 1816, seven years after he left the presidency. His positions can confound people today, and leave people to cite him for views all across the political spectrum. The reason is that his values were liberal, focused on helping those least well off (slaves excepted), but some of his means, perhaps appropriate for the time, are more like those of conservatives today. He could certainly be described as an America Firster, seeking to protect Americans from foreign competition. This belief arose from his opinion that America was and would remain an agricultural nation, one of small farmers. He sought to keep them small farmers so as to protect these less than wealthy people from the exploitation experienced by factory workers in Europe. As such, he opposed the interests of large businesses, a different motivation than today's isolationists. He also believed that if America became involved in widespread international commerce, it would inevitably result in wars with competitor nations, such as were constantly taking place between European nations at this time. "And all this to feed the avidity of a few millionary merchants, and to keep up one thousand ships of war for the protection of their commercial speculation," he writes. Jefferson also supported the idea of states seceding from the union, though he endorses it on behalf of the commercial oriented states if they insist on such widespread trade. Jefferson wished to protect the agricultural states and their citizens from being drawn into the worker exploitation and wars common to the European nations. Item 18. $375,000.

Talk about a President who was a mixed bag, here is another whose views crossed the political spectrum, a man once widely celebrated whose reputation has been badly tarnished in recent years. Andrew Jackson was another supporter of the little man, his glaring blind spot being America's natives. Yet even as he brutally exiled them to far off, undesirable parts of the continent, he was welcoming to immigrants as this letter reveals. Jackson had received a letter from Bernhard Muller, a recent German immigrant at the time this letter was written in 1831. Muller sought Jackson's protection as he felt vulnerable in the new land. Jackson responds by reassuring Muller that he does not need the President's protection as in America, he is fully protected by the law. Noting that Muller had expressed his desire to settle in America, Jackson writes, "Such acquisitions it is the interest and pride of the United States to cherish; and as their highest executive officer I take delight in assuring that the benign and equal spirit of their laws will not only protect your person and property but I trust will promise to you the enjoyment of as much prosperity as can be promoted by the influence of government in any country anywhere." Item 12. $21,000.