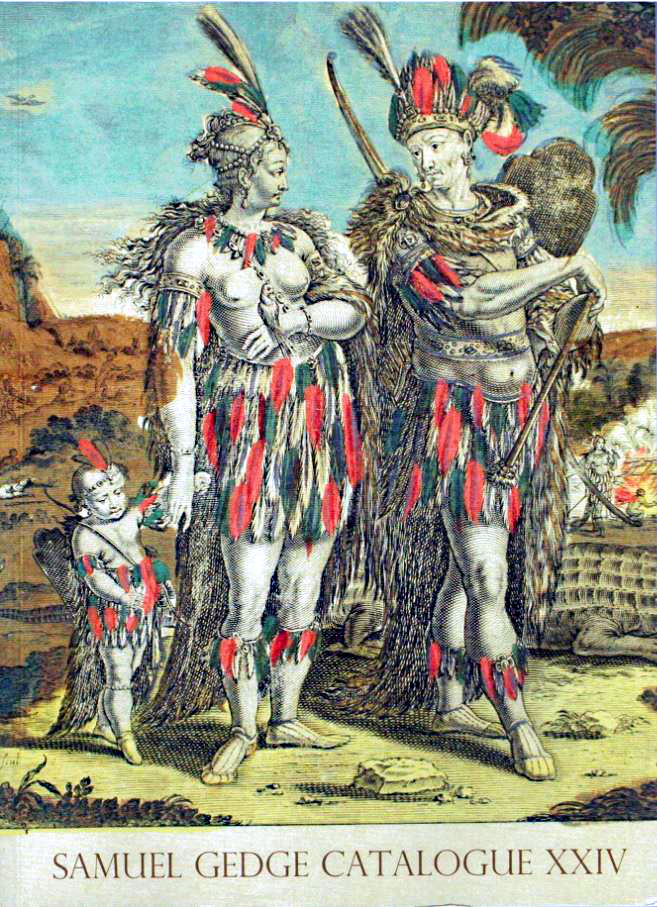 Samuel Gedge Ltd. has issued their Catalogue XXIV. There is no further title nor description and I think I understand why. These items are very hard to describe. There are many centuries-old documents and ephemeral items that make you wonder how did this piece ever survive? Papers representing business and personal transactions, rules, personal notes, posters, items rare if not unique when they were first created so long ago. Gedge has somehow managed to find them. That is not to say there are no books here. Gedge also has some 18th and 19th century novels, books long forgotten but appealing to readers of another era. There is even a 1770 French translation of an English novel, The Point of Honor, of which the French version appears to be the only one that has survived. This is certainly an eclectic mix of material and a fascinating look at times of the distance past. Here are a few examples.

We begin with a land grant that will entitle you to 30 acres in the "Poyaisian Republic." Good luck finding the place. It is one of many such grants created by one of the greatest confidence schemes in history. It is dated April 5, 1834, and signed by Gregor MacGregor. MacGregor had served in the British army, then joined the fight for independence in Venezuela, earning himself friends in Latin America. His scheme began with supposedly securing 8 million acres of land along the Mosquito Coast of Honduras from King Frederick Augustus. Frederick Augustus was a native "king," but with no power. Nevertheless, MacGregor used this grant to sell parcels of land that he described as idyllic, but were little more than swamps and jungle over which he had no control. A lot of Englishmen went for it, some investing their life savings. Some even went to settle their lands, many dying from disease before the others returned. Still, MacGregor was able to continue the scheme for many years, at one time moving on to France when sales declined. It would not be until 1838, 18 years after it all started, that MacGregor hightailed it to Venezuela, where he was still regarded as a hero. Item 65. Priced at £450 (British pounds, or about $574 in U.S. dollars).

Item 1 is Rules and Regulations to be Observed in the Convict Establishment. The "convict establishment" was the prison hulks, old ships at port that were used to house Britain's overflowing prison population. Most of the convicts inhabiting these hulks were destined for transportation out of country, to Australia or other places where the English would no longer have to deal with them. These rules were promulgated in 1840 by John Henry Clapper, then the Superintendent. The rules cover all aspects of prison life, covering the roles of various personnel, daily routines, transfers, visitation, and timing of watch staff. A volvelle (one of those spinning paper dials) enables each numbered watch to determine its duties on that day. Hulks were used from 1776 until 1857 to house prisoners. £2,500 (US $3,192).

Item 72 is a printed souvenir in German for Clara, a touring rhinoceros. It would have come from 1746-48 when Clara toured Germany, one of many European countries she visited from 1741-1758. Clara was adopted by a Dutch East India Co. executive after her mother was killed by a hunter, and taken to the Netherlands in 1741. Rhinoceroses were a rarity in Europe in those days, not something found in zoos, so crowds would come out to see such a strange looking animal. This broadside contains a large picture of Clara along with some German copy. Clara died in London in 1758, approximate age 20. £950 (US $1,211).

Item 108 is a touching broadside poem To The People Of America from the children of the Wigton School in Cumberland, England, circa 1830. By this time, slavery was long since outlawed in England and was about to be ended in all of its colonies. The emotional words, directed toward the southern states where slavery still reigned, would seemingly touch any human heart. The poem begins:

So far beyond the wave,

O listen to our earnest prayer,

and liberate the slave!

It goes on to speak of the "torturing lash," women's cries of fear, blood mingled with the soil, families torn apart in human auction sales. Sadly, America did not listen to these British schoolchildren's prayer, and paid a heavy price for it. £350 (US $446).

Item 41 provides a look at what it was like traveling around Britain in the late 18th and early 19th century. It is a collection of 20 printed bills from various inns dated 1784-1830. Many provide lists of food and drink offered, services available. Some drinks would be hard to find today, such as negus (Gedge tells us it's a mixture of port, hot water, and spices) and bumbo (rum, water, sugar and nutmeg). Services available included "horses hay and corn," "carriage greasing," "paper, cards and postage," "pipes and tobacco," and "servants eating and ale." The fact that offerings were available to servants, and we will presume the quality was not the same as that offered guests, indicates that these were places for travelers of means. No Motel 6's here. £2,500 (US $3,189).

Item 12 is a scroll consisting of two conjoined sheets To The Honorable Sir John Shore Bart, from 1798. Bart was leaving his job as Governor-General of Bengal in India and 198 residents of Calcutta wanted to thank him and wish him well. It is a who's who of the most important people of Calcutta at the time, and each has signed the note. While the text describes them as "British inhabitants of Calcutta," there are signatures of several notable foreigners on the list too. £2,750 (US $3,509).