Back to the Cradle (Africa) from Shapero Rare Books 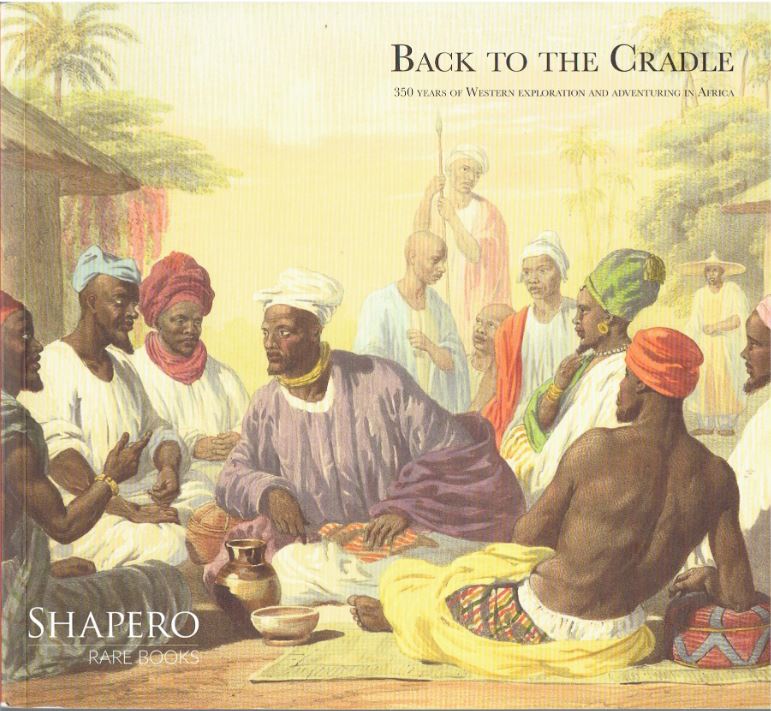 Back to the Cradle.

The real cradle of civilization is not the Tigris and Euphrates valley, as there were human civilizations long before that. To find the first, we need to go to Africa, from whence humans came and went forth and multiplied. For Europeans, once they left, they forgot the past, but with the dawning of the Age of Discovery, they finally returned, to explore and discover the land they did not yet realize was their beginnings. Shapero Rare Books has issued a catalogue entitled Back to the Cradle, with the subtitle explaining what that means, 350 Years of Western Exploration and Adventuring in Africa. These are a few of the items offered.

We begin with perhaps the best known of all African discovery tales, though it wasn't the discovery of new lands, natural wonders, or of unknown people. It was the discovery of a missing English explorer, doctor, and missionary. The writer/searcher was Henry Stanley, and your presumption of who he found is correct. The title is How I found Livingstone, Travels, adventures, and discoveries in Central Africa, including four months' residence with Dr. Livingstone, published in 1872. Dr. Livingstone went to Africa as a missionary, but it didn't take long before he turned his attention from missionary work to exploring. However, he hadn't been heard from for years when Stanley, financed by the New York Herald, set out to find him. It took him 236 days, but Stanley found him along the shore of Lake Tanganyika. Livingstone's health was poor by then, but Stanley spent four months with him and nursed Livingstone back to health before proceeding on to Britain, Livingstone's journals in tow. Item 132. Priced at £3,250 (British pounds, or about $4,143 in U.S. dollars).

Perhaps the greatest mystery of African geography, other than locating the source of the Nile, was finding the terminus of the Niger River. That doesn't sound hard, since rivers must flow to the sea. The problem was that no one connected the upper part of the river with the end. The middle was a mystery. It begins in the mountains of west Africa and flows northeast toward the Sahara. Mungo Park made two notable journeys down the river near the end of the 18th century, but never reached the end. In 1829, Rufane Shaw Donkin presented his theory in the book A Dissertation on the course and probable termination of the Niger. His theory was that it flowed into Lake Chad, then northward from the lake into the desert, where it disappeared into an underground stream. Finally, it reemerged at the Gulf of Sidra along the Mediterranean Sea in Libya. It was an interesting theory, but completely wrong. A short time later, the mystery was finally solved by the Lander Brothers. After heading northeast into the desert, the Niger makes a sharp right turn and proceeds in a southeasterly direction, emerging along the African coast 2,600 miles from where it begins. Item 46. £1,250 (US $1,593).

A decade later, an expedition was sent up the Niger by the British with multiple purposes. It was part missionary, part designed for the establishment of commerce, and partly to shut down the slave trade. Unfortunately, its accomplishments were limited by illness. The Europeans among the travelers contracted malaria at a high rate, and very quickly, many of them died. They were forced to abandon the effort and return home. Item 104 is Medical history of the expedition to the Niger during the years 1841-42, comprising an account of the fever which led to its abrupt termination. The author was James Ormiston M'William, senior surgeon on the Albert, one of the three participating vessels. It proceeded for six weeks, which was longer than the other vessels, before having to turn back. While only one African died on the voyage, 40 of the 145 Europeans died, with 130 of them becoming ill. The voyage did serve to provide lessons in how to treat malaria. £850 (US $1,083).

James Richardson explored an area where few rivers flow. Item 118 is his Travels in the great desert of Sahara, in the years 1845 and 1846... Richardson decided to travel as deeply into the Sahara as he could, commencing along the coast at Tripoli. He spent nine months visiting various oases and inland cities, including Gadames, Ghat, and Mourzuk. You will need a map of Libya to locate these. He had hoped to penetrate even deeper into the desert but was unable to travel farther south. A few years later, he led an expedition to Lake Chad, but died of unknown causes. £850 (US $1,083).

Next is a different sort of back to Africa, a movement to return freed American slaves to the continent of their ancestors. Unfortunately, so long removed, the former slaves had little connection to the land or its inhabitants, or immunity to diseases present in Africa. The movement was controversial, dividing well-meaning people of both races. Some who wished to aid the freed slaves felt they had a right to remain in America. Those sympathetic to the former slaves who promoted a return believed that black people would never be treated fairly by American whites, making this a better option. Naturally, racist whites also tended to favor this choice. Item 71 is Liberia; or the early history and signal preservation of the American colony of free negroes on the coast of Africa. The author was William Innes, a minister, the book published in 1830. This was just ten years after the Liberian colony was established, with about 1,500 settlers having arrived by this time. £500 (US $637).