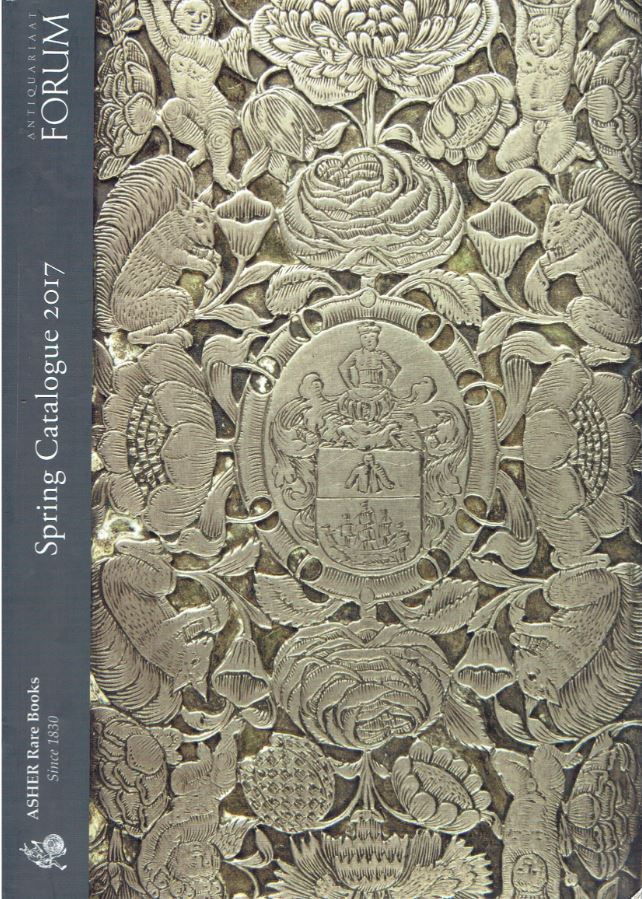 The Antiquariaat Forum and Asher Rare Books have offered their Spring Catalogue 2017. The selection is varied, with the common element being the material easily qualifies for being antiquarian. Anything that was of interest long ago, from travels, natural history, science, religion, conflicts, and more are fair game for this catalogue. These are a few selections.

There was a lot of incorrect medical advice being given out a few centuries ago, undoubtedly more bad than good. However, it would be incorrect to say the claims made in this book are wrong. After all, claimed properties about something that doesn't exist really aren't wrong. Item 14 is De Unicornu Observationes Novae (new observations on unicorns). The book describes the miraculous properties of unicorn horns. It was written by Thomas Bartholin, together with his son Caspar (the Younger). The Bartholins weren't quacks. They came from a family of serous scientists and medical practitioners. Thomas is noted for the discovery of the human lymphatic system. In those days, most people believed unicorns were real, and the Bartholins were able to reach their conclusions about the horns from those supplied by Icelandic traders. Thomas' uncle had earlier concluded their "unicorn" horns were actually the tusks of narwhals, a cold water whale with a long protruding tooth that looks like a tusk. Still, the Bartholins believed that unicorns were real and someone's horn was good for many things. Offered is the expanded and first illustrated second edition, published in 1678. Priced at €1,250 (euros, or approximately $1,410 in U.S. dollars).

Now, here is some bad advice concerning the medicinal properties of plants. Symphorien Champier was an early 16th century physician, probably the most notable doctor of the era in Lyon, France. He, too, was no quack, but in an era when deductive reasoning trumped actual observation, scientists made many errors. Champier studied Arabic medicine extensively, and in this book, he writes about Arab medicinal plants in particular. The title is Hortus Gallicus... published in 1533, consisting of three parts. With increasing use of these exotic plants in Europe, Champier concluded that they were "pernicious and venomous" for Europeans. Here was a perfect example of too much "logic" and not enough observation. He concluded the effectiveness of medicines on humans depended on the national characteristics of those people. Climate, ethnicity, religion, nationalism all came into play, with European plants being more suitable for Europeans. Champier believed that God placed the right plants for each people in their own location and so advised people to use only those indigenous to their region. Item 38. €18,000 (US $20,296).

Here is another case of overthinking things a bit, by a man who was part scientist, part mystic, and a lot of other things, including a playwright. Giambattista della Porta was a polymath, and while he dabbled in the occult, he also at times looked to observation, in effect, the scientific method, to reach conclusions. Item 176 is his Phytognomonica... a second edition, published in 1591. In it he places plants in their geographic locations, and provided some pioneering work on fungi. However, he also reached an interesting, if inaccurate, conclusion about plants. He believed their outer appearances indicated their healing properties, based on how their outer appearances resembled those of humans. So, for example, since the seeds of an open pomegranate line up sort of like teeth, he concluded it was good for the teeth. The maidenhair fern, a hairy sort of plant, was good for curing baldness. €1,250 (US $1,410).

Next we have two books bound in one volume by Michael Bapst, published in 1591: Ein newes und nutzliches Ertzney, und Wunderbuch... and Gifftjagendes Kunst unnd Haussbuch... The books provide recipes and advice on everything. Bapst was an amateur scholar, culling his advice from the writings of others. Because there is so much, he points out that he has not been able to test every recipe, so if one doesn't work, it is the original author's fault, not his. The Antiquariaat Forum notes that among the many topics in the first volume are "nose-bleeding, tooth-ache, the taming of leopards, fishing, invisible writing and giving copper the appearance of silver." The second volume covers, among other topics, "spider stings, driving out wolves, bites of lions, fishing bait, killing bats, diarrhea in chickens, preserving fruit and meat, fishing frogs and a great deal about worms." If the topic isn't in these books, it isn't worth knowing. Item 12. €2,250 (US $2,538).

Item 3 is one of only three copies located of the first edition of this Russian-Swedish treaty of 1809. It is written in both Russian and French, the French title being Traité de paix entre la Russie at la Seude. Ultimately, it proved important, not so much for the Russians or Swedes, but for the Finnish. It effectively settled the borders for what would become an independent Finland. The Russians and Swedes often fought each other in the old days. They had a war from 1788-1790, but reached a peace agreement. They became allies until 1801, when Russia entered into an alliance with Napoleon, France being an enemy of Sweden. Napoleon would prove not to be an ally of Russia a few years later when he invaded the country, but Tsar Alexander I must have fallen for Napoleon's charms in 1801. In 1807, Russia went to war with England, demanding that Sweden keep its ports closed to foreign warships, as required by earlier treaties. When Sweden did not, claiming French occupation of their ports prevented them, Russia invaded Sweden, and seized the ethnically Finnish lands that were long part of Sweden. By 1809, a weakened Sweden had no choice but to cede the territory to Russia, which they did via this treaty. Russia then set up the Grand Duchy of Finland, which became an independent country after the Russian Revolution. Item 3. €1,500 (US $1,691).