The American Revolution from the William Reese Company 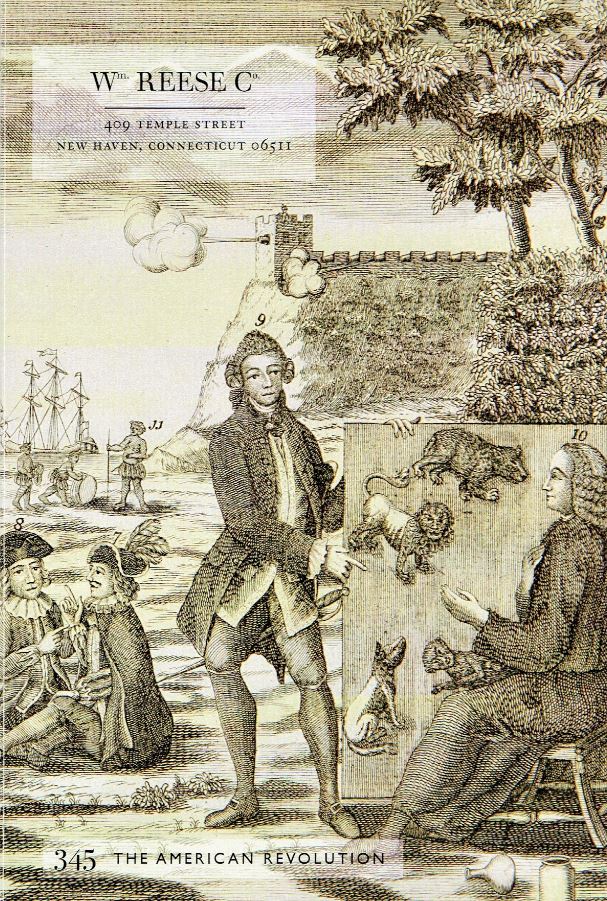 The William Reese Company has released their 345th catalogue, The American Revolution. The time period covered runs from the 1760's, notably with the Stamp Act of 1765 which ticked off the colonists no end, to the 1780's when the war came to an end and the new nation began to deal with the issues of self-governance. A few items were printed later, as late as the Civil War publication about the last seven known surviving veterans of the Revolutionary War. This catalogue coincides with the publication of two new bibliographies prepared by Reese, The Revolutionary Hundred, covering major items from 1763-1783, and The Federal Hundred, covering 1783-1803. Both are available in the catalogue. Now, here are some of the 165 items offered in this new catalogue.

Relations between the British authorities and American colonists quickly soured after the end of the French and Indian War. After years being bound together by a common interest in fighting the French, the two turned on each other as the British tried to force the Americans to pay more to the mother country. The looming differing interests exploded with the passage of the Stamp Act in 1765. This placed taxes on all types of transactions in the colonies, ones which Americans were unwilling to pay, especially since they had no voice in the decision to impose them. The British were not expecting the level of blow back that resulted. Some in Britain realized they had gone too far, others sought to force the Americans into submission. Item 145 is an anonymously written pamphlet by someone who understood the American nature and realized it was in Britain's own best interests to lay off. Published in London in 1765, the title is The Necessity of Repealing the American Stamp-Act Demonstrated: Or, A Proof that Great-Britain Must Be Injured by That Act. The writer states that the Americans do not have the military force to resist, but they can refuse further trade with the colonial power, causing great economic harm. Better understanding the Americans' nature than most in England, he explains. "...they will never consent to enrich us, while they think we oppress them; they will never treat us with the respect due a parent, while they think we treat them as slaves..." Item 145. Priced at $1,500.

The British repealed the hated Stamp Act, but their continued interference in the colonies, coupled with a later tax on tea, led to the Boston Tea Party. Angry colonists dumped a load of British tea into Boston Harbor. Instead of seeking to find a resolution acceptable to the people of Boston, the British chose to harshly punish them, including the majority who played no role in the Tea Party. They passed the "Intolerable Acts," the first being one that closed the Port of Boston to all commerce until the citizens of that city reimbursed the East India Tea Company for the lost tea. Naturally, this act just made the Bostonians angrier. Item 133 is Observations on the Act of Parliament, Commonly Called the Boston Port-Bill; with Thoughts on Civil Society and Standing Armies. The author was noted Massachusetts native Josiah Quincy, this first British edition of the pamphlet published in 1774. Quincy attacks Parliament for imposing collective punishment on Bostonians, and goes on to attack standing armies as "armed monsters," and "fatal to religion, morals, and social happiness." $6,500.

The Intolerable Acts led to the forming of militias in Massachusetts to protect the state from feared attacks by the British military. Britain controlled Boston, but once out of the city, it was the patriots who were in control. The British decided they needed to crush any potential rebellion, and a good starting point was to seize the arsenal the colonists had put away at Lexington and Concord. Over a year before the colonists would officially declare their independence, the British attacked these two outposts. The Massachusetts militias threw them back, forcing the English troops to retreat to Boston. Naturally, the citizens of Massachusetts were enraged, but the British action compounded their problems in the other colonies as it only served to draw them closer to Massachusetts. Item 8 is a broadside from May 1, 1775 headed The American Crisis. Let God, and the World Judge Between Us. What Reese describes as an "exceedingly rare and important Revolutionary broadside" is a response to the Battles of Lexington and Concord just two weeks past by the Connecticut legislature. It is vituperative, to say the least. The British had stirred up a hornets' next. They describe the battles as the "...late Murder & Massacre, by a Brigade of near 1000 savage soldiers, on a handful of inoffensive Men collected at Lexington..." They go on to speak of the "unnatural and Barbarous Designs of the Ministry of Great Britain," and warn that the colonists have an experienced army that will fight "for their inestimable Rights, their Religion, their Wives, their Children, their estates, and conscious Justice of their Cause..." Rather than quelling a rebellion, the British had only managed to assure that the rebellion would spread to the other colonies. $75,000.

A year later, the colonies would be in open rebellion, and by the end of that year, Thomas Paine, whose writings helped spur the colonists to rebellion, would pronounce these words still remembered today - "These are the times that try men's souls." After early losses in New York, some of the patriots were becoming dispirited, unsure whether to continue their rebellion. Paine proclaims that "the summer soldier and the sunshine patriot" will shrink from service, but those worthy of honor will fight harder for their cause. Item 122 is a copy of The Boston-Gazette and Country Journal from January 13, 1777. It contains Paine's The American Crisis Number I, the first publication of this piece in Boston, the cradle of the Revolution. The Boston Gazette was published by Benjamin Edes, who had been printing radical pro-American views since the time of the Boston Massacre. $85,000.

Here is a one-of-a-kind piece signifying the successful end of the Revolution. It is a pen and ink manuscript map of Virginia headed Plan des Environs de Williamsborough, York, Hampton et Portsmouth, from 1781. It belonged to Rochambeau, the French military commander who led French land forces in aid of the Americans. Rochambeau was sent to Rhode Island in 1780 to lead the French military, but for a year they holed up there to protect French ships. In the summer of 1781, they began moving east, 5,500 of them, to hook up with Washington's forces north of New York City, and then begin the march to Virginia. This was the map Rochambeau used as he led his men, whom, with Washington, would defeat Cornwallis and the British. When the battle was over, the English threw in the towel and the war was over too. Item 17. $600,000.