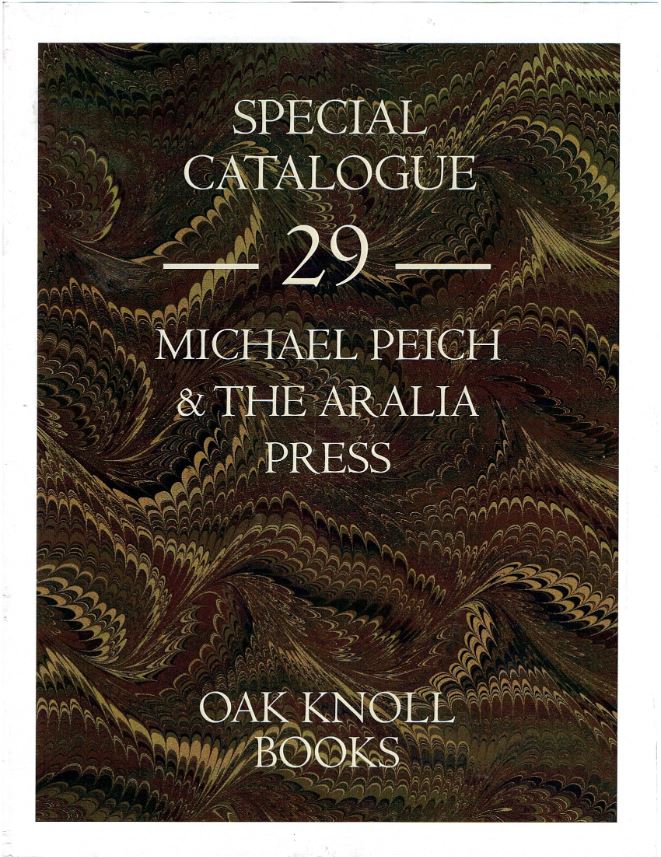 Oak Knoll Books has published their Special Catalogue 29 Michael Peich & the Aralia Press. The Aralia Press is a private, fine press operated by Mr. Peich in West Chester, Pennsylvania. Founded in 1982 by the (now) recently retired professor at West Chester University, Peich was determined to print books using traditional, by-hand means to produce the quality of the long-lost days before massive presses designed for print runs in the millions. Aralia has achieved that goal, though it is hardly unique in what it does.

However, that is only half of the story for Aralia. Peich has long loved poetry and his second goal was to support new and unknown poets. Getting published is not the easiest task for unknown poets, but Peich was determined to give them a start. So, he chose to use his press to print the work of aspiring poets, hoping to give them the recognition needed to one day no longer be unknown. That he has done for numerous modern poets.

Peich's love for poetry led him to create an annual event most notable in the field of modern poetry – the West Chester Poetry Conference. That he created with his good friend and once (but no longer) unknown poet Dana Gioia. Gioia had been an executive at General Foods, one of those who created "Jello Jigglers," according to The New Yorker. Obviously, he already had a talent for alliteration before writing poetry. Gioia has since gone on to serve as Chairman of the National Endowment for the Arts and California State Poet Laureate. And that provides the intro to a few examples of the Aralia Press works found in this catalogue.

Gioia was still holding down his day job in the food industry when he began writing and publishing poetry. His first published work came in 1982 and then in 1983, he published his first collection of poems, entitled Summer. The printer for this collection was Aralia, which had only begun printing the previous year as well. It was not a long book (about 10 pages) but provides a selection of poems. It was printed in a limited edition of 200 copies, the type set by hand by Peich. This copy is signed by Gioia. Item 48. Priced at $50.

Item 38 is a broadside of a poem by Gioia, one that brings fear and trembling to a one-time college student, even all these many years later - Homage to Soren Kierkegaard. Kierkegaard was the 19th century Danish philosopher whose works I had to read without ever understanding a word. Perhaps it was because he wrote in Danish and the translator did a miserable job. Fortunately, Gioia's words are understandable. Certainly, my experience with Kierkegaard makes this line of Gioia's one I can relate to: "The more one suffers, the more one acquires a sense of the comic." Today I can laugh about my experiences with the Danish philosopher, though even now it is an uneasy laugh. This poem was printed in 2013 for the Soren Kierkegaard Bicentennial at the First Lutheran Church in West Seattle, Washington, a place he never visited. It is one of 120 copies, signed by the author. $50.

This next book combines the work of two poets, with an apt name for one that is a collaboration – A Conversation. Jim Harrison is better known as a novelist. He writes of rural Americans somewhere between the two coasts. Several of his books have been made into films. However, his other writing style, less well known, is poetry. For Harrison, it was his favorite type, more artistic and more revealing. His partner in this work was Ted Kooser, primarily a poet, and living in the Heartland. What is unusual is that the book never explains who wrote what. As they say in the introduction, it "is an assertion in favor of poetry and against credentials." Item 55 is one of 26 lettered copies of the limited Deluxe edition, published in 2002. It has been signed by both authors. $625.

Next up we have Starr Farm Beach, by Timothy Steele, published in 2005. Book catalogues are particularly helpful when they enable us to learn something new. Oak Knoll informs us, "Timothy Steele writes prosodic poetry, and has written two books about prosody." "Prosody" is like one of those spelling bee words – you might be able to spell it, but you have no idea what it means. At least I don't, or didn't. It relates to the use of intonation, pitch, rhythm, stress, and such with syllables to add to the language. As such, it is not a phonetic sound like a vowel or consonant, but tones or accents added to a syllable. It is "What?" or "What!" or "Whaaaat" or "WHAT" as opposed to "What." So, how does that apply to poetry? I'm not sure. Spoken poetry would be easy to read in a prosodic form, but written seems more difficult. Perhaps some sorts of symbols are used? Maybe you can figure it out from these poems. Item 140 is one of a limited edition of 180 copies. $40.

Richard Wilbur is both one of America's most acclaimed contemporary poets and mid-20th century poets. He's both because he has been around a long time. He won the Pulitzer Prize for poetry in 1957 and again 32 years later. In between, he became America's second Poet Laureate, succeeding Robert Penn Warren. Item 159 is a broadside printing of an eight line poem published in 2011 entitled Sugar Maples, January. It is one of 250 copies, and this one has been signed by the author. It was printed in celebration of Wilbur's 90th birthday. Today he is 96. The poem is about sugar maple trees in the dead of winter, at rest, awaiting the still far off springtime. I hope that republishing such a short poem is not some sort of copyright violation. I think it's short enough for fair use, and while I'm no connoisseur of poetry, he paints a picture that is easy for anyone to visualize from his words:

"What years of weather did to branch and bough

No canopy of shadow covers now,

And these great trunks, when the wind’s rough and bleak,

Though little shaken, can be heard to creak.

It is not time, as yet, for rising sap

And hammered spiles. There’s nothing there to tap.

For now, the long blue shadows of these trees

Stretch out upon the snow, and are at ease."