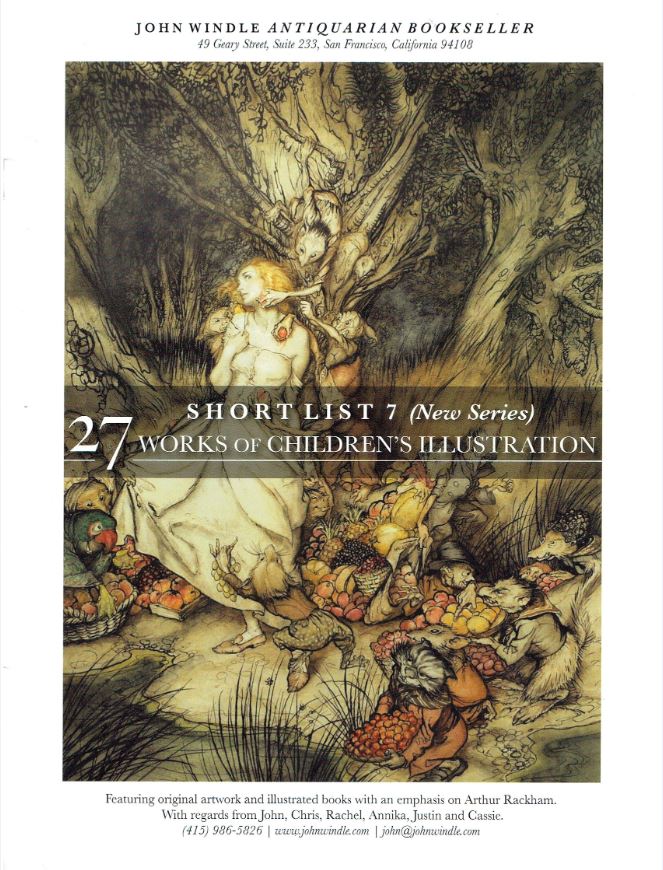 John Windle Antiquarian Bookseller has published their Short List 7, 27 Works of Children's Illustration. There is a mix here of illustrated children's books, portfolios of illustrations, and much in the way of original artwork for such books. Almost half of the items were created by perhaps the most collectible of all children's book illustrators, Arthur Rackham. Rackham illustrated numerous special editions of children's books, though there may be an item or two here that is more adult oriented. Rackham's original drawing of an otter is magnificent, but I'm not sure most children would fully appreciate Isaac Walton's Compleat Angler. But, they do enjoy fishing. Here are a few selections from these illustrated items.

Walter Crane was one of England's most notable children's book artists at the turn of the twentieth century. He was part of the Arts & Crafts movement of the late nineteenth century, influenced by the man who became the most notable private press publisher, William Morris. He also shared Morris' radical political ideas, promoting socialist and labor causes. In 1881, Crane put together this work: The First of May; a Fairy Masque. Presented in a series of 52 designs. It contains 57 plates, the 52 designs plus plates such as the title and limitation page. It was a limited edition of 300 copies on India paper, this being #66. It is signed by Crane. The verse was provided by John Richard Wise, which perhaps explains the book's surprising dedication to Charles Darwin. Wise, who is not credited in the book, was a naturalist and writer, for whom Crane had provided illustrations as a young man. Wise was also a political liberal though I don't know whether his views were as radical as Crane's. Somewhere between Wise's naturalist and political interests may reside the answer to why the book is dedicated to Darwin, certainly a controversial figure at the time. The plates, most notable for Crane's drawings and calligraphy, are loose (as issued) and mounted. The work was published by bookseller Henry Sotheran & Co. and reportedly was not a financial success at the time. Item 2. Priced at $1,150.

Item 25 is one of the illustrated gift books of the turn of the century, a beautiful production of an older piece. In this case, it is the poem The Sensitive Plant, by Percy Bysshe Shelley. It takes the sensitive but not beautiful plant through the life of a garden, from care by its loving owner, to her death, and ultimately that of the garden. Surely there are some metaphors here! However, this edition is more noted for its illustrations, which were created by Charles Robinson. They are as sensitive as the plant. Along with on-page illustrations, there are loose plates - a frontispiece and 17 richly colored scenes. Published in 1911. $395.

One good Robinson deserves another. Item 6 is an original watercolor by W. Heath Robinson. This illustrator named Robinson was a brother of Charles Robinson. This drawing features a mermaid and a merman. The maid is a lovely young mermaid, the man a chubby, balding fishtailed gentleman with a bushy beard. They are examining the clothes on the beach of a "Tommy," a British soldier from the World War I era. He is off in the distance with his toes in the water, but looking back now at the others on the beach. The caption states, "There are more things in heaven and earth, Horatio, than are dreamt of in our philosophy." The illustration was created in 1925 for an unknown publication. $3,500.

Next up is one of those works from Arthur Rackham, and it is a spectacular one. It is original artwork for "White and golden Lizzie stood." That line comes from the poem Goblin Market by Christina Rossetti. The poem was originally published in 1862 with illustrations by the author's brother, noted artist Dante Gabriel Rossetti. However, this edition did not come along until 1933. It included numerous black and white drawings along with four color plates. Item 16 is the original artwork for one of these. This is the work Rackham specifically created for the book, not a later recreation as he sometimes did. It was purchased from Rackham in 1935 and has never before been on the market. The illustration is classic Rackham, riveting in its detail and mix of fantasy and realism. It is pictured on the cover of this catalogue. $65,000.

Item 27 is some more original artwork, created for the best known children's books of the past two decades. That could only be the Harry Potter books. It is a pencil, ink and watercolor illustration of Hogwarts School of Witchcraft and Wizardry. The artist is Cliff Wright, who specializes in illustrating children's books and drawing animals. This illustration was created for the back cover of the British edition of the second Harry Potter book, Harry Potter and the Chamber of Secrets. The publisher hired the noted children's book artist for this title after the great success of the first book in the series. $30,000.