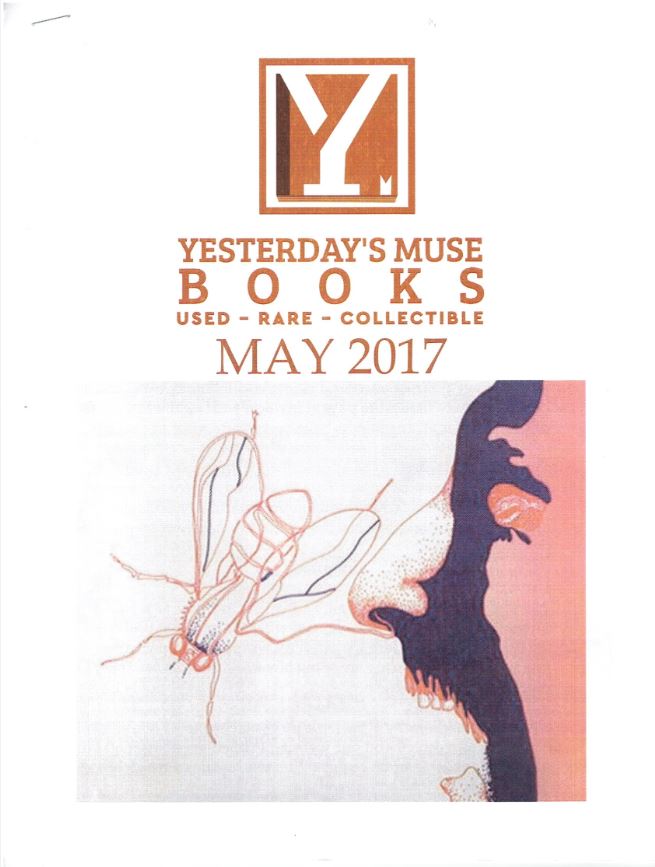 Yesterday's Muse Books has issued a catalogue of used, rare, and collectible books for May 2017. This collection is hard to categorize as the topics vary. Perhaps the word they use to describe the book of cocktail recipes, Ted Saucier's Bottoms Up, works for this catalogue as well - "mixology." If not something for everyone, there is certainly something in this mix for a lot of people. Here are a few selections.

We begin with the first item, itself a first for collectors of Americana. The title is National Songster; or, A Collection of the Most Admired Patriotic Songs, on the Brilliant Victories, Achieved by the Naval and Military Heroes of the United States of America, Over Equal and Superior Forces of the British, From the Best American Authors. The year for this collection of patriotic American songs was 1814, and the "brilliant victories" were achieved during the War of 1812. That war was more of a draw, but Americans were having none of that level of objectivity as they defended their soil from the return of their former colonial masters. Among the songs is one titled Defence of Fort M'Henry. It no longer goes by that name. Today, it is called the Star Spangled Banner. This is the first book printing of the poem/song that first appeared in a magazine. The author's name is not given, but we all now know it to be Francis Scott Key. Seventy-five years ago, Scribner's book store described this collection as "excessively scarce." Item 1. Priced at $5,000.

Here is another American first: An Accurate System of Surveying, in which is contained, I. Decimal Fractions, in a plain, concise, and easy Manner. II. The Extraction of the Square-Root. III Plain Trigonometry... The author was Samuel Moore and the book was published in 1796. This is the first American work on surveying. In the preface, Moore explains why he wrote the book - "...original surveys of this Country, so far as my Knowledge (from Acquaintance and Information) extends, are very confused and incorrect..." He sets about providing the mathematical principles necessary to perform the task accurately. Moore also points out that "the large Tracts of appropriated Lands belonging to the United States, renders the Art I am treating of, at this Time peculiarly important." The need was about to become even more peculiarly important as in 1803, America doubled its land size with the completely unsurveyed territory of the Louisiana Purchase. Item 72. $750.

As those of you living in North America prepare for summer vacation road trips, here is a guide that will help you: Official Paved Road and Commercial Survey of the United States: Sectional Road Maps Covering the Entire United States and Lower Canada... Then again, maybe it won't be of much help. That title reveals that it is likely to be quite dated. Most national road maps today don't specify that they relate to paved roads. It is a given. In 1928, it was not. The official numbering system for roads had only gone into effect three years earlier. Prior to that, highways all had names, and many were dirt. Most were either built locally or by states as the federal government had only provided minimal aid for the building of roads. It would not be until the Depression that the government would seriously invest in the dual purposes of building a better highway system and creating jobs. Item 11, $200.

If you are a connoisseur of film, particularly of early talkies, here is an opportunity for you. Items 28-32 are five issues of Film Fun, from dates in 1934 and 1935. This magazine included pictures of numerous film stars of the day, along with information and advertisements. The list of stars is way too long to mention. Anything that includes Greta Garbo and the Three Stooges is very thorough indeed. The covers feature illustrations of scantily-clad pin-up girls by Enoch Bolles. Think of them as fine bindings. Priced at $50-$125 each.

Here is an account of immigration to America by a most interesting man. Johann August Roebling was a trained engineer in Germany when he, his brother, and others immigrated to America. However, he did not come to practice that trade. Rather, it was to settle a colony of German immigrants in Pennsylvania. He took up farming. That was fine until the Panic of 1837 crushed the economy. Roebling determined he needed to find more lucrative work. He turned to engineering, bridge building in particular. He was involved in the design of many, including the John A. Roebling Suspension Bridge which connects Cincinnati with Covington, Kentucky. His last project was the Brooklyn Bridge, but early on he was injured along the docks and died a few weeks later. Back in 1832, when he was still in the colonization business, he wrote a book in German about his travels to America. That book was finally translated to English and privately printed in 1931, Diary of My Journey from Muehlhausen in Thuringia via Bremen to the United States of North America in the Year 1831. It was printed by the "Roebling Press" in Trenton, where he had settled to conduct his engineering work. Item 12. $125.

This next one is not very old, though its roots, so to speak, go back a couple of hundred million years. Item 27 is Jurassic Park by Michael Crichton, published in 1990. It's enough to make you thankful you didn't live in the age of dinosaurs. It is the story of dinosaurs, cloned from fossil DNA, placed in a theme park for tourists. All does not go well. $50.

Yesterday's Muse Books may be reached at 585-265-9295 or yesterdays.muse@gmail.com. Their website is found at www.yesterdaysmuse.com.